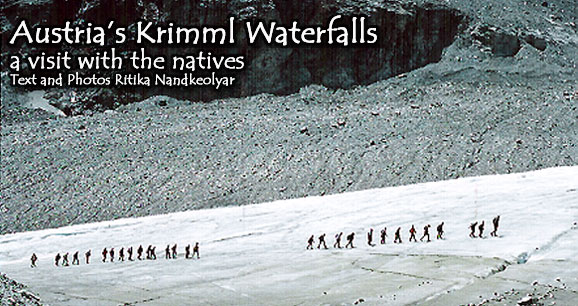 The sound of bells is coming from behind me. For the past hour, I’ve been wondering whom they belong to. Now I’m looking forward to meeting some other hikers on the winding path next to the Krimml Waterfalls. I decide to sit down and wait for company on a convenient rock.

It’s a very rainy weekday and early, so unlike most of my other day-hikes in Austria, I’ve encountered only a handful of other sightseers. This, despite the fact that I’m going up a path used by over 700,000 visitors a year as they trek to see the highest waterfalls in Europe.

The Krimmler Wasserfälle are just one of the natural wonders of Europe’s largest national park — Austria’s Hohe Tauern National Park. The park contains a large area of the Hohe Tauern range, part of the Austrian Central Alps, and stretches across the Austrian provinces of Salzburg, Tyrol and East Tyrol. The Hohe Tauern range encompasses 246 glaciers and 304 mountains higher than 3,000 meters (9,842 feet) in an area of 1,800 km² (695 square miles). Austria’s highest mountain, the Großglockner (12,460 feet, 3,798 m), lies within the park.

The clear mountain stream Krimmler Ache runs from the Krimml Kees glacier 12.5 miles (20 km) to the valley. It plunges over three cascades, together totaling 1,247 feet (380 m) in height. I’ve already passed two of them. The first cascade falls 459 feet (140 m), and is just past the waterfall park entrance. Its powerful spray drenches all near its base — the rocks, plants and visitors taking photographs. After 30 minutes, I passed the second fall, a shorter cascade of 328 feet (100 m), bordered by precipice known as a hunter’s leap after a legendary poacher who leapt over the falls to escape his pursuers.

I’m slightly winded, even though the wide “Wasserfallweg” (Waterfall Way) has quite a gentle ascent by Austrian standards. In Austria, it seems that everyone from the littlest child to the oldest grandmother can out-hike me. I’ve learned to take the distance signs that I pass on trailheads with a grain of salt. If the time allowed for a 0.6-mile (1 km) hike is given at 30 minutes, I know that it will take me at least 45 minutes. That’s what comes of being casual North American walker in a country of outdoor fanatics.

But who can blame the Austrians? When you live amidst the beauty of the Alps, it can be hard to resist their call, particularly when you can hike hut to hiking hut and not worry about carrying too much camping equipment or food. The Österreichischer Alpenverein (OAV — the Austrian Alpine Club) maintains a series of mountain huts across Austria. Some of these huts are simple refuges; others have cafés and rainwater showers.

The OAV built the Wasserfallweg in 1900 and, along with a consortium of private farmers, owns the Hohe Tauern National Park. This is why the park contains both mountain wilderness, including alpine lakes and glaciers, rare ecosystems of trees, flowers and wildlife and human civilization, with an agricultural valley, 29 towns and 60,000 residents.
Within the national park are hiking trails for all levels of experience including glacier walks. In addition, for the non-athletic, the 19-mile (31 km) Großglocknerstraße, a high mountain road, climbs through the park and provides unforgettable views of the high peaks.

Back to the ever-closer bells. I still wait on my rock, eager to see fellow hikers. Each section of the trail has its own character and this topmost part is the wildest. The path is bordered by the falling water and on the other side wild mountain grasses and flowers quickly give way to a forest of widespread spindly pines. While I can intermittently feel the colder spray of the rapids as distinct from the slightly warmer rain, the water running beside me on this section between the second and third cascades is relatively calm and gentle.

Suddenly, I see the first the face, front and hindquarters of a brown-and-white mountain cow. It is her bell that I’ve been hearing. The cow takes a quick look at me, obligingly poses for a photograph and continues up on her way, perhaps up to the hotel at the top of the falls. I’ve just met my first mountain cow.

Apparently, the local farmers around Krimml set their herds free to graze on the mountainside every spring. In late September they round up the cattle and celebrate their return with flower necklaces and parades for the cows at the annual Almabtriebs-Fest. The festival also features a crafts exhibition, farmers’ market and live entertainment.

Although I continue up the path and eventually reach the third set of falls (a spectacular rapid that drops 459 feet, or 140 meters), I never catch up with my cow again. I guess I have to add yet another category to the list of who can out-hike me: Austrian mountain cows!