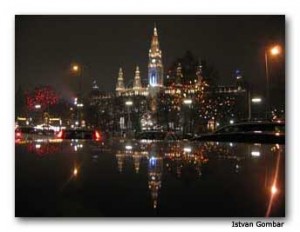 A wide grin captures my tired face as the airplane taxis towards the terminal, but I don’t try to hide my happiness. No, I don’t have a lover waiting for me at the gate with a huge bunch of flowers. It isn’t Mom and Dad, either. No, it’s merely the voices in the terminal that thrill me, that charming Austrian German dialect that I have missed for so long.

I’m finally home in Vienna, Austria, after a year of living in Portugal. While the year abroad has been wonderful, there is something quite special about coming home to all that is familiar.

They say that you only appreciate something once it’s gone, and it’s that way with Vienna for me. Separated from the grandeur of its palaces, the tree-lined avenues and the lazy flow of the brownish-greenish Danube River for several months, I now rediscover a secret admiration for my hometown.

“Come on, it’s just another European city with cobble stone streets,” an outsider might say with a shake of his head. True, but Vienna combines the coziness of tiny streets with an imperial air left over from the Austro-Hungarian Empire. The Austrian capital was once a powerful and royal city, but the locals have combined that sense of dignity with a nonchalant, “couldn’t-care-less” lifestyle, resulting in a unique twist on life that always keeps me smiling.

Though sometimes rough and grumpy, Vienna’s inhabitants have a soft center that you can access if you just leave them in peace and quiet. How relaxing to know that shopkeepers enjoy quietly greeting and being greeted. They don’t consider you prey that needs to be forced into a regretful sale.

Of course, Vienna is not all vanilla skies; in fact, skies are blue only on occasion during spring and summer. But it’s the city’s candor and courage to admit to imperfection that makes it so approachable.

It’s foolishness, I know, but within a few moments after arrival, I feel like the prodigal daughter returning home. I’m eager to explore and see all that I’ve missed.

It is Christmastime now, and the grey, wet December fog heavily fills the lungs and veins of the city. But lights in the shape of icicles, fir trees, candles and snow flakes brighten up your face and mood, despite the cold. Glowing street markets are places of warmth and coziness, and – just like the Star of Bethlehem – the beams indicate a path of light.

I head toward the Christkindlmärkte (Christmas Markets), where bright stalls offer handcrafted ornaments or sweet foods to mark the season. During winter, people seem to be more openly gregarious, though not extroverted. Huddled around wooden rustic huts, holding steaming cups of hot spiced wine or pockets of roasted chestnuts, they chat, eagerly awaiting Christmas Eve. They’ve left the office hours ago, and are now toasting with their bosses. “Prost!” they cheer, with cups in hand. I wrap my hands around my warm Gluhwein as well, soaking in the sounds and smells around me.

Because of festivities and its laissez-faire character, the entire city basically shuts down between December 20 and January 7. The Viennese “don’t-stress-me-out” attitude turns holidays and family gatherings into a truly restful experience.

One of the most popular local sayings is, “Don’t panic on the Titanic,” meaning that, regardless whether you hurry or not, the outcome will most likely be the same. So take it easy, we believe, everything will all work out somehow, someday. The belief that fate controls our lives is ever present with statues of saints all over town. Little old ladies try to tickle the saints’ benevolence upon the lives of their families by decorating the carved stone images with real or artificial flowers.

Amidst the impressive significance of Vienna’s imperial history and inspiring musical achievements, the locals consider themselves to be tiny puppets of the universe as a whole. The Viennese enjoy making fun of that irony: The croissant, for instance, was first baked during the successful defense of the fierce Turkish occupation in the Middle Ages. A clever baker decided to form dough in the shape of the half-moon on the Turkish flag. So by taking a bite from the croissant, the Viennese turn the severity of life into a delightful breakfast pleasure every day.

In this city, life is only as serious and demanding as you allow it to be. For me, it’s a relief to know that the slower pace is not only accepted, it is expected. Unless you really want to mess with the frosty waiter, you’d better leave your time tables and schedules at home and simply contemplate on your mere existence in that tiny, smoke-filled café.