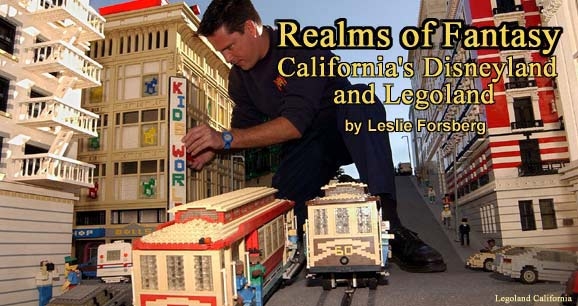 A King Kong–size duck waddled over to the park and, fluffing its feathers, settled into the meadow, throwing an immense shadow over the surrounding grove of trees. There were no screaming waves of city folk running for their lives, however.

Only three bemused visitors to Legoland California — my husband, Eric, my 12-year-old daughter, Kirsten, and I — laughing over the incongruous nature of the avian interloper nesting in the Lilliputian Jackson Square of New Orleans.

“I spent much of my youth hanging out in Jackson Square,” said Eric, my husband, a New Orleans native. “And it looked exactly like that,” he said, gesturing to the tiny tree-studded model.

“Really?” I quipped. “Exactly?” How many trees did you crush when you sat down?”

Eric made a sour face. Yet he couldn’t hold back a smile.

We were on a whirlwind southern California theme park trip, visiting the 128-acre (0.5 km²)Legoland, in Carlsbad, and Disneyland and Disney’s California Adventure, in Anaheim.

It was Eric’s first visit to Legoland, a place that Kirsten and I have returned to again and again, each time experiencing the latest rides and attractions, many of them kid powered.

Unlike the usual theme-park rides that require complicated safety harnesses and high-powered automation to jostle squeals and screams out of riders, Legoland rides take the low-tech approach, with kids using their own power to make some of the rides “go.”

It seems to me a wonderful antidote to the way today’s kids have a glazed-eyed devotion to handheld electronics devices, with thumbs being the only thing exercised.

Kids were riding model fire trucks to put out a simulated fire in a kid-size building; driving miniature cars in the Volvo Driving School; and playing golf in the new Wild Woods golf course.

Some 50 million Legos are used throughout the park, ranging from robotic elephants spouting water (Kirsten’s favorite) to a life-size dinosaur.

In addition to the low-tech attractions that are so popular among the elementary-school set, the park has been revving up its offerings for older kids, with recent additions such as Knights’ Tournament, which opened in 2005, featuring robotic arms that tilt, spin and jostle riders in an imaginary fight against an immense “fire-breathing” Lego dragon.

In the Imagination Zone, we were drawn to the beehive of activity in one room, where a half-dozen boys and girls raced between computer monitors and Lego Mindstorms robots.

The intensity in the room was at a fever pitch as the kids built their own robots and programmed them.

I imagined these young techno-geeks as tomorrow’s software or robotics engineers, bringing new high-tech devices to life that might help solve some of the world’s problems.

While Legoland California benefits from the cooling onshore breezes of the nearby coast, it is still California, and temperatures can soar in summertime.

In Splash Battle, the only ride of its kind in the United States, kids can navigate pirate ships, complete with water cannons, on “high-seas adventures.”

Exploding volcanoes and roving bands of pirates add to the adrenaline thrills.

Treasure Falls is a mini-flume log ride with two plunges. Soak-N-Sail, in the form of a shipwrecked pirate vessel, has more than 60 interactive water features for kids to play in, and a water-and-shore area offers passive recreation.

Sixty miles (96 km) north, water was the conveyance of Eric’s favorite attraction at Disneyland, in which we boarded boats and were propelled through a cavernous, brightly lit space and assailed by robotic, ethnically dressed dolls incessantly singing a song.

Never in a million years would I have guessed that Eric, my “I’ve never had an interest in theme parks” husband, would find It’s a Small World enlightening. Yet here he was, grinning broadly.

After he waxed poetic about the universal theme of everyone getting along, regardless of origins, I could see his point.

Kirsten and I winked at each other as, at Eric’s insistence, we rode the boats through a second time. We knew what Eric did not at the time … that once that song was in his head, it would stick like a limpet to a rock.

One of the best parts of a visit to Disneyland is its predictable nature, which is especially welcome for adults who have become accustomed to change as being the only thing that’s predictable.

From the old-time folksiness of horse-drawn wagons on Main Street and the astonishingly cheery disposition of every Disney “cast member” to the revamped Pirates of the Caribbean and enhanced Space Mountain, Disneyland is a venerable park with high-quality entertainment.

Disneyland is celebrating its 50th anniversary with new attractions in both Disneyland and the adjoining Disney’s California Adventure park.

Among the latest offerings are Disneyland — The First 50 Magical Years exhibit, with original Disney artwork and models, and Buzz Lightyear Astro Blasters, a comical “space mission.”

In Disney’s California Adventure, Monsters Inc. Mike and Sulley to the Rescue! and Block Party Bash are the latest attractions.

In addition to the newest attractions, Disneyland has gone through an astonishing transformation for its 50th celebration that must have involved truckloads of fresh paint, and maybe a little pixie dust.

Everywhere we looked, the theme park was not only clean (as always), but it looked brand new, with absolutely everything upgraded.

The castle has never looked so much like a fairy-tale residence, with sparkly gold paint embellishing its turrets and new gold banners unfurled.

If ever there were a right time to visit Disneyland, I would say that time is right now, when it’s wearing its most elegant garb.

Enjoying Our Time At Disneyland

While I was enjoying the visual splendor of the parks, Eric was thinking about what’s behind the scenes. Disney, as a company, has always been an innovator.

Walt Disney Imagineering invented audio-animatronic figures, debuting the new technology in 1963 with the opening of the Enchanted Tiki Room. We paid the attraction a visit to see what the early years of Disney technology looked like.

Special effects, including a telescoping chandelier and a sudden “rain shower,” held the audience’s attention.

Gaily colored tropical birds sang, flowers chimed in and faces on totem poles startled Kirsten when their mouths clacked open and shut, as their voices joined in the chorus.

While technology has progressed at the speed of light since the debut of this technology, it still manages to surprise and delight visitors, who burst into a round of applause at the end of the show.

Hours later, we strolled down the streets of Disney’s California Adventure, where we would see the latest Disney technology in the new exhibit Turtle Talk with Crush.

The show started normally enough, with the audience seated in front of a movie screen with Crush, the turtle dad from Finding Nemo, introducing himself and discussing the many meanings of the word “dude,” in a hip Aussie accent.

“Why are turtles green?” she asked. Crush dove down to the bottom and gestured at waving kelp fronds. “We are what we eat,” he said, and displayed his broad green back as he elaborated on his answer.

A man in the audience asked, “Did you know you are an endangered species?” bringing a peal of laughter. Crush turned blue and looked dejected as he slumped to the bottom.

His brow wrinkled and his eyes darted nervously. He then perked up a bit, and talked about the importance of helping to conserve his species.

After the show everyone was wide eyed, trying to puzzle out how the turtle’s movements and demeanor could change in response to random audience questions.

It’s an example of real-time animation, with an actor backstage answering questions. The details, however, true to Disney, are left to the visitor’s imagination.

After all, we all need to believe in a little magic now and then, don’t we?