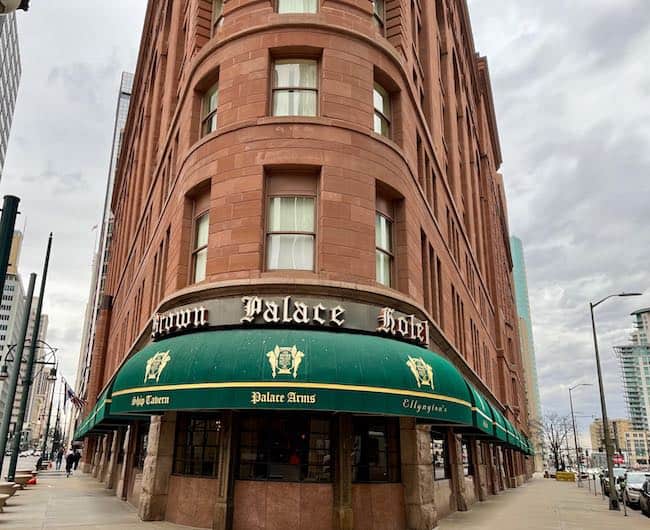 At first, people called  The Brown Palace Hotel “Henry C. Brown’s Palace Hotel” after the man who built it. Indeed, it was a palace—one of the grandest of all grand hotels in the nation. Over the years, it has hosted royalty, presidents, high-powered businessmen, celebrities—even the Beatles stayed here. The signature of Titanic heroine Margaret Brown (no relation to Henry) is in the guest book, as well as that of my parents who chose it for their wedding night in 1936 before embarking on their honeymoon to Europe on board the Queen Mary.

The Brown (as locals now call it) has been a city landmark since 1892. Designed by prominent architect Frank Edbrooke, who also designed the Capitol and other notable buildings, the triangular red sandstone Romanesque structure sits proudly like a ship’s bow at the corners of Broadway, Tremont and 17th streets at the beginning of downtown. It’s the second oldest hotel in Denver (after The Oxford), operating continuously until closing for 64 days in 2020 due to the COVID Pandemic.

Edbrooke designed the building around a magnificent atrium—the first hotel atrium in the nation—as the heart of the hotel. Eight stories high, light pours through a stained-glass skylight suspended between the eighth and ninth floors. The Italian Renaissance style features gold Florentine arches, walls of topaz and rare cream-colored onyx, and iron filigree panels on balconies surrounding the atrium (can you spot two that are upside down?). Holiday decorations are spectacular in the atrium when the traditional Denver Debutante Ball takes place. Also, the National Western Stock Show’s grand champion steer walks the lobby’s red carpet every January.

The clock above the front desk shows the Brown’s logo, the griffin, that repeats around the hotel. A griffin is a mythological guardian of mountain gold treasure, a nod to the mining roots of Colorado. A vintage mail drop box on the wall between main floor elevators is still used by the postal service. Until 1937, cage elevators were hydraulically powered by the on-site artesian well that still produces drinking water for guest rooms and public areas.

Rooms at the Brown Palace

Since the hotel became part of Marriott’s Autograph Collection in 2012, the 241 guests rooms—once opulent with Victorian decor—have been modernized to the point of mediocrity. No longer are they special or traditional like the atrium. “Sadly, the rooms have been Marriott-ed,” one out-of-town guest said.

Our “Executive King” room is devoid of character with nondescript furniture and a cheap wooden cart holding a Keurig coffee maker with paper cups that don’t fit. Above it hangs a huge framed black and white blueprint of the 6th floor. Huh? They couldn’t find a landscape painting of our beautiful Rocky Mountains?

During the Depression of the 30s, they converted rooms to private apartments on the eighth and ninth floors to generate income for the hotel, then installed a glass brick wall around the atrium to provide privacy and block lobby noise. But today, the wall insulates guests from dramatic views of the atrium and the lovely sound of music drifting up from the piano in the lobby throughout the day. Now the apartments are soulless suites of corporate decor, as are the hallways framed by the glass blocks.

Dining at the Brown Palace

Award-winning Palace Arms held the reputation for the best special-event dining in the city until downtown fine dining competition exploded. For many years after it opened in 1950, my father took our family there for my holiday birthday dinners until I had a family of my own. It was a very special outing, and it still is. The dining room is lavishly appointed with artifacts from the Napoleonic era, such as Napoleon’s dueling pistols, swords, and armor acquired in post-World War ll France by the hotel’s owner at the time, C. K. Boettcher. The locally-sourced food and attentive service are as elegant as the decor, with table-side Caesar Salad presentation and the finest locally raised Angus Beef served by the ounce, “cooked to perfection,” my companion said.

Ellyngton’s used to be a great place for dinner and dancing, but now it’s open only for breakfast and lunch and is the place for Sunday Champagne Brunch downtown. This is perfect since sunlight fills the traditionally decorated room during the morning hours.

Ship Tavern is the other iconic spot that I’m glad the new owners haven’t messed too much with.  The sailing theme established by Boettcher after returning from a trip to New England still prevails. At his wife’s suggestion, he filled the vintage pub with large-scale model sailing ships and other ship artifacts after opening in 1934 to celebrate the end of Prohibition. It’s open for lunch and dinner from 11 to 11 every day.

The Churchill Bar cigar lounge is a legacy at The Brown. Here, wood and leather decor provide a manly vibe for business meetings and social gatherings. Besides spirits, beer, wine, and a selection of more than 60 cigars, it serves lunch and dinner.

This is the tradition I cherish the most at The Brown. It started in 1910 when well-heeled women got together in the ladies’ lounge on the first floor resplendent in hats and finery to enjoy tea and cake. The  Brown reinstated the beloved tradition in 1986, serving classic tea sandwiches, scones, pastries, and England’s Devonshire Cream with an assortment of exotic teas. It takes place every day at noon in the center of the lobby just below the grand staircase. The space morphs into the Atrium Cocktail Hour from 4:40-7:30 with a jazz combo on Fridays and Saturdays.

One amenity the Brown didn’t have back in the day is the Spa, a luxury retreat offering treatments using the hotel’s artesian waters coming from deep in the ground. Specific to Colorado is the Mile High Experience, alluding to the altitude of the Mile High City. In this treatment, therapists use CBD cream with pain-relieving herbs in a massage, wrap, and pedicure. The elegant Spa entrance is from the lobby.

I highly recommend taking a hotel tour from longtime historian Debra Faulkner. With a history of prominent guests, love affairs gone sideways, society ladies,  lingering spirits, and secret passageways, its storied past comes alive on her tours. Check the website for dates, times and prices.

Things to do around the hotel

A well-versed concierge can lead you in the direction of the many attractions in downtown Denver, and you don’t need a car. One of the best is right across the street—The American Museum of Western Art. You also can walk to History Colorado Center, Denver Center for Performing Arts (DCPA), the state Capitol, Civic Center Park, Denver Art Museum, and other prominent museums. A free shuttle runs the length of the 16th St. Mall where you can access many shops, restaurants, nightlife, Coors Field, and Union Station. At Union Station, the light rail train takes you to Empower Field at Mile High (football) and Ball Arena (hockey and basketball), Elitch Gardens Amusement Park, Denver suburbs, and all the way to Denver International Airport.

“Much has been altered in a continual balancing act that weighs respect for the Brown’s history against the need to remain a competitive, first-class hotel,” writes historian Debra Faulkner in her book Ladies of The Brown. “Today’s management recognizes that it is both the design and history that make the Brown a singular experience.”

Claudia Carbone is an award-winning travel writer and member of the Society of American Travel Writers, North American Travel Journalists Assoc. and Denver Woman’s Press Club. Currently, her work is published in The Denver Post, Colorado Expression Magazine, London Sunday Telegraph, GoWorldTravel.com and RealFoodTraveler.com. Her blog Sleepin’ Around covers any place you can sleep on vacation.

A Romantic Weekend in Ponte Vedra Beach
Next Post: Top 10 Things to do in Rhodes, Greece: So Much More Than a Beautiful Beach Destination