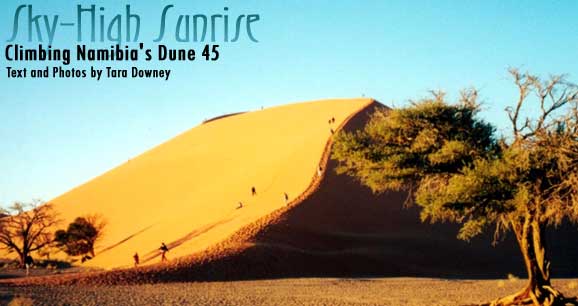 The world’s tallest sand dunes are in the Namibian desert — and it was here, at Dune 45, that I would see heaven and earth collide with the rising sun. The Namib-Naukluft National Park is the largest ecological preserve in Africa measuring about 19,300 square miles (50,000 km²). It is a picture of beauty and elegance: golden-red sands shining down upon the barren earth below. In its center beckons a magical oasis: Sossusvlei.

Vlei means “shallow depression filled with water” in the Afrikaans language, which has been recognized as the national language since 1990, when the country gained independence from South Africa. But the Sossusvlei pan is only wet during a good rainy season, when the Tsauchab River manages to infiltrate the dune belt from the west, then is stopped by a barrier of dunes, preventing it from flowing any further.

The highest dune in the Sossusvlei region is called Big Daddy; it rises more than 1000 feet (300 m) high, at a 45-degree angle. The desert’s most popular and accessible feature is known as Dune 45, which reaches more than 560 feet (170 m).

It’s unromantically named after the distance in kilometers from the fairly small — 0.6 mile (1 km) long and about 98 feet (30 m) deep — yet beautiful Sesriem Canyon.

I was on a guided 21-day overland safari from Cape Town, South Africa, to Victoria Falls in Zimbabwe. There were 23 people in our group, and we were just four days into our journey when we were told that we would be seeing the sunrise over the desert the next morning. We had no idea what we were about to experience.

We were staying at Solitaire, appropriately named since the “village” consists merely of a gas station with store and is run by only one man. Solitaire exists only to service those heading to the dunes or the canyon.

After an hour’s drive by converted truck — the preferred vehicle for group safaris in southern Africa — we arrived at Dune 45 for a 5 a.m. start to our climb. We needed to reach the top by sunrise … and looking at the dune’s height and curves from ground level, this seemed an almost impossible feat.

To walk up the dune you have to go along the edge. One wrong step and you could slide with the sand. The path is about a foot (30 cm) wide, and your feet sink into the ground, making it hard to continue.

It’s an even bigger problem when you meet with traffic — people on their way back down to the ground or those with more energy passing you by. Half the time it feels like you are stepping in the same spot over and over again. Perhaps this is why it takes so long.

The ascent is extreme, and you have to have some level of fitness if you want to make it. At 6 a.m., I was still about 160 feet (50 m) from the top, but couldn’t go any further.

My breathing was rapid, my heart felt as though it was trying to break through my chest, and the muscles in my legs were aching, almost to the point of collapse. Though it was freezing cold, I was covered in sweat. I stopped and sat on cold sand to wait half an hour for the sun to rise.

My breathing and heart slowed. The cold dried my sweat, leaving me shaking, as I didn’t have a sweater. But it wasn’t for long.

The view of the desert was filled with shadows, and the sun was just beginning to light up the sky in a faint orange tinge. The sun began to rise over the golden-red sands, and my breath was taken away. Then the dark shadows disappeared and I was faced with a fire-like beauty as the sun shone on the red sands.

The Namib Desert, stretching some thousand miles (1,600 km) along the Atlantic Ocean coast of Namibia, is considered to be the oldest desert in the world, having endured arid or semi-arid conditions for at least 80 million years. The red coloring of the sand is an indication of its age. Slow iron oxidization and fragments of garnets cause the color change: The older the dune, the brighter its color.

The sunrise turned the shadowed sands into a mirage of orange, red and mauve. More dunes towered below, lighting up with the new day. The ground seemed miles away, and the desolate surface was concealed by the beauty unfolding at this height. I could only sit and stare with fascination at the wondrous landscape before me.

I felt as though I could lose myself in this moment, but as the sun continued to rise I was faced with a harsh reality. Within an hour, the sand would be too hot to stand on and possible wind storms could blast me with fine grains. It was time to leave this magical setting behind and return to reality.

Coming down from the top of Dune 45 is much easier on the legs, and the lungs. It’s possible to run if you have the energy, to toboggan down the sides if you have a towel or jacket you don’t mind getting dirty, or to leisurely retrace your footsteps along the edge.

The hour-long journey to the top preceded a 10-minute venture back to the ground. At the bottom, our tour guides greeted us with a treat of bacon and eggs for breakfast.

Although it wasn’t five star, and was cooked in the back of the truck, it was one of the best meals I have ever eaten, and was well deserved. After we left Dune 45, my muscles were aching for days, but my mind was filled with memories that will last a lifetime.