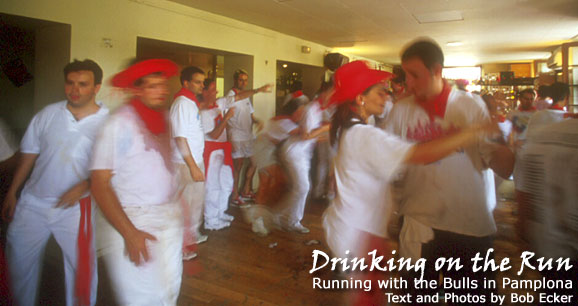 Starting of a New Experience

The clock ticked down. At 7:55 a.m., a small shrine to Saint Fermín was set up in a wall, and everyone chanted some ancient screed, rolled newspapers waving, to the 12th century saint for safety and well-being.

Not knowing what they were saying, I shook my fist and chanted with the rest anyway. The sun broke over the tops of the narrow streets as I heard the first fireworks go off. Everyone started running.

July marks the beginning of the weeklong Sanfermínes festival in the city of Pamplona in northeastern Spain.

The ancient celebrations to honor the patron saint of Pamplona and the entire Navarra province are best known for the running of the bulls, or encierro, made internationally famous by Ernest Hemingway’s novel The Sun Also Rises (1926).

That morning, I muscled into the surging crowd, trying to get to the main square by noon for the “official” beginning of the festival.

Donning the traditional white shirt and red sash, plus the ubiquitous red bandanna, I joined the march.

I saw an undulating sea of white and red, people moving, dancing, shouting.

Packed, glistening crowds of mostly young, semi-inebriated men and women stood shoulder to shoulder in the narrow streets filled with the laughter of thousands.

I made it to the Plaza Consistorial, and the old City Hall building with its Renaissance facade.

Amazingly, as I got closer, champagne and wine bottles littered the street — by the hundreds.

People were leaning from rows of balconies overhead, pouring liquid down onto the crowd below.

The streets smelled like stale alcohol and sweat, but it was warm and the music was honking — a bizarre chaotic scene, but somehow, fun.

I then did the only thing any right thinking person would do — clamored to the nearest wine shop and bought a bottle of Cava champagne. Nothing great, but at least it was cold.

Even all the musicians of the roving marching bands — playing accordions, drums, and trumpets — had drinks in their hands. I met a group of locals, eager to try out their English on me.

One woman from nearby Bilbao chatted easily in English, and a big bear of a man named Juanto, warned me about the bulls.

“Don’t touch them,” he said. “And don’t run on the weekend, too crazy.” I asked him if he had ever run with the bulls. He smiled sheepishly and said: “No.” We both laughed.

I joined their festive group and we all passed around bottles of Cava, the white-sparkling wine made in this region.

“Can you help me find a place called Ruggles, the bar?” asked Jenny from New Zealand.

I shrugged, then pointed down the street. The narrow cobblestone alleys were overflowing with thousands of people, crammed into the cafés, bars and shops, and many just sat on the pavement.

During the festival, most of the bars remove their doors entirely, since they don’t close at all for eight straight days.

Squeezed into one bar, I overheard a guy with a “proper” British manner say, “These Spaniards are simply crazy. I like it.” The cramped streets boomed as all manner of sound bounced off the ancient cobblestones.

Hungry now, I found some fresh pollo y frites (chicken and fries) at a tiny café. It was dreadfully hot, and the food was greasy, spicy, messy — delicious.

I ventured back to the main square and ended up at the Iruña bar, one of Hemingway’s renowned haunts.

The place was packed with history, laughter and booze. Upstairs I bought a “Special Kas” — some secret tangy mix that included copious amounts of gin. That did it.

I danced with a pretty blonde, then thought I saw bulls flying toward the ceiling, singing some song that reverberated in the back of my head.

Reality and a dream state were now intermingling.

Stumbling back through the folding crowds, a sign said it was 102 degrees Fahrenheit (39 C) — hot. A nap at the hotel was in order.

Rest in a Park

A park loomed in my foreground and I decided to rest there for a moment. As soon as I hit the grass, I was out — cold.

I slept in the park for over two hours, with my passport, money and camera lying at my feet, unprotected in the open summer sun. Fortunately, no one touched anything. I got up, groggy but somewhat refreshed.

The festival draws over a million and a half visitors and it’s an accepted tradition that vast numbers sleep in the city parks. And people were sleeping everywhere, just like me.

I stopped for a couple cups of coffee, then sashayed back to the hotel, sweaty, grass-stained and full of life. The bulls would begin running early the next morning.

Somewhere between dream and nightmare, I awoke at 5:30 a.m., and again barreled through the throngs into old Pamplona.

I found my way to Santo Domingo Street, the first portion of the Run and camped out.

I encountered some American guys: one from Texas, one from New York, two from Los Angeles and another from Atlanta.

Two English guys and a huge grizzled man from Jamaica rounded out our little party on the street.

There were lots of people here already — this being Sunday, the biggest day when thousands of people accompany the effigy of Saint Fermín along the streets — the day I had been warned never to run.

“Many drunks, tourists, and just too many people,” said my knowledgeable Spanish sources.

Yet here I was with countless other fools, drunks and testosterone-addled specimens. There were a few women, but it appeared 99 percent men.

I listened to all sorts of stories and rumors about what would, and would not happen during the Run.

People made bets, and some read their newspapers, with backs to the walls, anticipatory sweat forming on upper lips.

The police made periodic sweeps pulling out the truly inebriated, those with backpacks, large cameras or other hindrances.

The time had finally arrived. The second fireworks blast went off signaling that the bulls were in the street; now people ran in a frenzy.

I ran too. Why not? They seemed to know what they were doing, or perhaps it was simply irresistible fear.

I ran hard in step with the guy in front of me, while I felt someone running up my back. I vaguely heard the roar of the crowd and a looming thunder, looked over my shoulder, and there they were.

Huge, black, wild and smelling like barnyard fury; the bulls were nearly upon me and I kicked into another gear.

They ran straight up the middle, like a perfect halfback draw, as I quickly moved to the side of the narrow street. The first bull was about an arm’s length away from me, and then he was gone.

Tan and grey steers came up fast, and I kept pace. They passed and I paused briefly to watch the scene.

It was absolute chaos. Several people in the street were standing still, others running, some walking backwards, some clutching the doors and walls.

Above the street stood hundreds of men and women cheering and screaming. People hung over every edifice photographing the action.

Some simply stood pointing with eyes wide and jaws dropped. I then heard someone yell in my ear as two more bulls charged fast and passed on my left. I chased them up the street until I could only see a distant blur of black, white and red.

I made the whole 900-yard (825 m) stretch to the gate of Pamplona’s Plaza de Toros (Bullring), where the bulls were going to participate in the afternoon’s corrida (bullfight).

Wheezing, I looked around then high-fived the nearest guys. I had done it! My elbow had a little cut where I’d brushed a stone wall, but other than that I was intact. Thrilled.

Nearby, I could see paramedics attending to a few fallen victims. I saw one unfortunate with a bloody eye, and another talking excitedly on the ground with blood on his pants.

I hoped they’d be okay. Perhaps fate was not kind to them that day, but for me it grinned.

I walked back, grabbing a café con leche (coffee with milk) along the way, marveling at the spectacular morning, understanding that the world is indeed a crazy yet enervating place.

“I’ve been coming back for the last 15 years. Wouldn’t miss it,” said Dr. Moss, a pediatrician from California. He stood tall with his red and white uniform slightly askew.

“Have you ever been hurt?” I asked him.

“Three years ago, a bull lifted me right up.” He laughed and took another swig from his beer. I laughed too and wondered about his, and my own sanity.

Hemingway knew, and came back to Pamplona year after year. Joy, blood, and verve — it’s all here in the blink of an eye, a crack of a drum.

This sensual, unforgettable place is still very much alive and it is one of the things that makes life worth living.

Many tourists have made the running with the bulls event more dangerous due to their lack of experience and skill needed to safely participate.

Security measures are in place. Nevertheless, every year there are numerous injuries. Some have died.

New Series: Ask Us Five Travel Questions
Next Post: Kickin’ Back at the Aruba Riu Palace