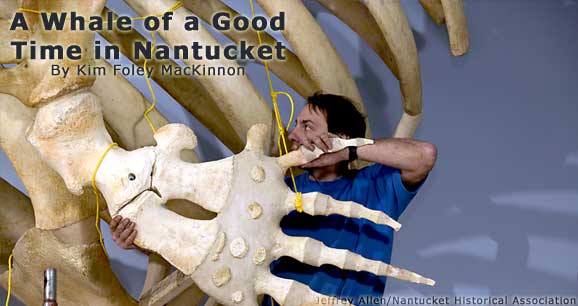 Just in time for its 75th anniversary, the Whaling Museum on Nantucket Island, Massachusetts, re-opened in June after an extensive two-year, US$ 12.8 million renovation. The museum is a must-visit site if you go to the island.After all, Nantucket would be nothing if it hadn’t served a vital role as a whaling hub during the 18th and 19th centuries. For almost a century (from the mid-1700s to the late 1830s), the island was literally the whaling capital of the world, with as many as 150 ships making port on the tiny island.

Nantucket is about 80 miles (129 km) from Boston, Massachusetts, and it’s only accessible only by boat or plane. On the island, time seems to have stood still. In fact, Nantucket is a National Historic District. Cars are discouraged, old-fashioned cottages remain intact and people greet you in the street with a friendly nod or hello.

While the island was once a whaling center, today tourism is its big business. Its hard-to-get-to status makes it a favorite of the wealthy and the famous, but day-trippers or weekenders enjoy the island as well.

The museum is the spot to get an overview of the importance of whaling to the island. Besides extensive updates and new interactive displays, the Whaling Museum is the proud home of the skeleton of a 46-foot (14 m) sperm whale that died on Nantucket’s shores in 1998. The skeleton hangs from the ceiling, allowing a 3D look from below, where the floor is painted to look like the ocean. An original whaling boat, smaller than anyone would think sane or safe to venture to sea in, sits below. On walls nearby harpoons and other tools of the trade are displayed — all seeming primitive and completely inadequate to the monumental task of bringing down a whale. Captain Ahab never seemed crazier.

Part of the museum is housed in a renovated 1847 candle factory, which has the only spermaceti (whale oil) beam press in the world still in its original home. It was used to process sperm whale oil into wax for candles and the press had been hidden by old construction. Now it is a proud centerpiece.

Among the many collections at the museum, one of the most important is its collection of scrimshaw, considered one of the best in the world. Scrimshaw is the art of carving images onto ivory – in this case mostly whale teeth, bones and walrus tusks. Bored whalers would carve various items on their long trips and the work is stunning. Everything from carved cane handles to combs decorated for loved ones back home are represented.

If you have children and worry that whales aren’t enough to interest them, never fear. A children’s discovery room hosts programs, story times, a dress-up closet and hands-on activities to engage their imagination.

While many people come to Nantucket for its pristine beaches, world-class dining and shopping, as well as its “get-away-from-it-all” feeling — all certainly valid reasons to come — it would be a shame to not to learn about its glorious past and people while you’re at it.

When my family went to the island for a weekend visit, we stayed just a short walk away, at the Harbor House Village, a distinguished mainstay in Nantucket. The hotel, which dates back 130 years, is just one of the many charming options for accommodations. Bed & Breakfasts, inns and home rentals are all available, but it’s wise to book well in advance, especially during the summer and holidays.

Hy-Line Cruises carries passengers and bikes on ferries from May through October and on a year-round high-speed catamaran (508-778-2600, www.hy-linecruises.com).

Freedom Cruise Line carries passengers and bikes from May through October (508-432-8999, www.nantucketislandferry.com).