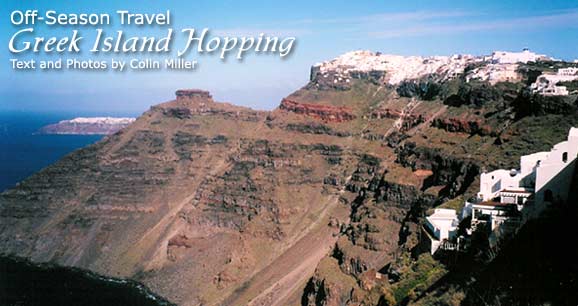 “Island hopping in the Mediterranean in February?” my friend asked, incredulously. “It’ll be cold and wet, everything will be closed and there’ll be no tourists,” she continued.

Well, I thought, it’s certain to be warmer than Britain, my home country, and I’m sure the local people still eat, drink and hold animated conversations in the tavernas (Greek cafes) and coffee shops all year round.

They don’t need visitors for company. And as for a scarcity of tourists, sometimes the fewer the better.

The idea of ferryboats carrying the locals from island to island without an accompanying horde of partying backpackers filled me with delight. Riding buses and hearing only the native language appealed to me.

And walking into a local restaurant causing the regulars to fall silent and stare at the stranger awakened my sense of adventure. Museums with no queues — the list goes on and on.

I got off to a good start in Haifa, Israel’s main seaport. I’d been staying on a nearby kibbutz, and managed to find a berth on a cargo ship bound for Cyprus with just two other passengers.

Moshe, a 74-year-old Israeli, was delivering a couple of cars to a customer.

Like most Israelis of his generation, he has led an eventful life and had many stories to tell.

The other passenger, Tomas, a young man from Poland, had been traveling all over the Middle East, even managing to enter Syria, Iran and Saudi Arabia.

When we reached Cyprus, an island nation in the eastern Mediterranean, however, my dreams of splendid isolation were dashed.

Walking along the seaside promenade in the port city of Larnaca, I heard English voices everywhere, and many Scandinavian ones, too.

It turns out that Cyprus is popular with long-stay retirees from cold northern climes. The Scandinavians swim and play ball games on the beach, while the British keep the bars busy in the evenings. Lovely island, but time to move on.

I had picked out Rhodes, the largest of the Dodecanes islands and easternmost of the major Greek islands, as my next destination.

Unable to find a ship bound for Rhodes, I had to resort to a less-romantic means of travel, an aircraft.

Walking in the City of Rhodes

I arrived in the city of Rhodes, at the far northern end of the island, at about 9 p.m.

Its labyrinthine maze of cobbled streets are punctuated with archways and courtyards that had a Gothic, surrealist quality to them in the nighttime gloom.

I’ve visited some narrow-laned towns in my time, but this one takes the biscuit. It was too dark to read the map in my guidebook, and the streets were deserted.

I walked past the shuttered hotels and shops before stumbling across a jeweler’s store that was still open. The owner led me to a tiny hotel, and before long I found myself in a charming, centuries-old bedroom.

Feeling encouraged, I headed off into the lanes in search of food and drink. I found both in a cave-like tavern where I enjoyed a bowl of pasta while sitting next to a roaring log fire.

The barman was so pleased to see a traveler that he bought me a beer, and we began talking.

Over the next few days, every time I visited his tavern, Satiris would talk to me about the history of Rhodes and Greece in general, giving me insight into the ancient culture of his people.

Learning About their Ancient Culture

Rhodes, inhabited since Neolithic times, was conquered by many rulers, including the Minoans, the Persians and Alexander the Great.

The island was part of the Byzantine Empire for a thousand years beginning in 297; it then belonged to the Ottoman Empire for nearly four centuries, starting in 1522.

The city was home to one of the seven wonders of the ancient world, the legendary Colossus of Rhodes — a giant statue of the god Helios, which stood roughly as tall as New York’s Statue of Liberty.

Satiris seemed to enjoy having the the opportunity to explain the history of his island. During the summer, when he is besieged by tourists he would only have had the time to say: “Yes sir, what can I get you?”

As I wandered through the streets of Rhodes, the largest inhabited medieval town in Europe and a World Heritage site, I had the place to myself.

Not entirely, though, as I met a young German author who was on a writer’s retreat while working on his second novel. And I drank many a beer with a small group of British expatriates, some of whom had lived in Rhodes for years.

This is what I had hoped for — contact with locals and the chance to observe places in an unhurried way, not as one of a tourist throng.

I managed to drag myself away from Rhodes by buying a ferry ticket to Crete, Greece’s largest island.

The ship eased out of Rhodes’ harbor at 4:30 in the morning, and before long, dawn was breaking to reveal a perfect blue sky and a calm sea.

Standing on deck with the sun on my face, I felt as though I was in another world. No traffic or noise or clutter of the manmade world, just the sea, the open horizon and millennia-old islands.

We arrived at our first port of call, the tiny island of Halki, population 300. A ribbon of pastel-painted cottages clung to the harbor, while craggy mountains rose behind the town.

When the ship docked, locals scurried off with string-tied bundles of who knows what, and battered vans and old trucks trundled up, then down the loading ramp.

For many of the islands the ferry is their lifeline; they have no other means of supply.

Crete (population 650,000), the largest Greek island, at the southern end of the Aegean Sea, appeared as a dot on the horizon, but soon the sheer rugged beauty of the terrain became apparent.

Mountain ranges fall precipitously to the sea, and a narrow plain on the north side of the island allows for habitation.

I spent most of my time in the town of Hania, also known as Chania, which is Crete’s second-largest city. Situated on the northern side of the island, Hania is considered Crete’s most beautiful town.

This area has been inhabited for at least 6,000 years, making it one of the oldest recorded communities in the world.

Sitting by the Venetian harbor in warm sunshine, I could gaze up at the backdrop of the 8,045-foot-high (2,452 m) White Mountains a few miles away, still covered in snow.

In addition to relaxing, I took in the sights: A 15th century lighthouse and the Mosque of the Janissaries along the harbor, the synagogue Etz Hayyim, in the Topanas District, believed to date from the 16th century, and Greek Orthodox churches.

The city is filled with museums and art galleries, and it has a fascinating old town just behind the harbor.

As in Rhodes, I found someone with the inclination and the time to talk. I was guided around by an English lady who had fallen in love with the island some years ago.

Apart from the scenery and sights, it’s the hours of conversation over coffee or beer that I will remember from this trip — and, of course, the absence of too many tourists.

Many people travel to relax on the beach and party — and why not? But for a different view of another country, the off-season has much appeal.

As I wander around another one of Crete’s picturesque harbors, I see a ferry tied up at the jetty. Now, I wonder where she is sailing to …

On Top of the World: Bridge Climbing in Australia
Next Post: Celebrating Chinese New Year in Singapore