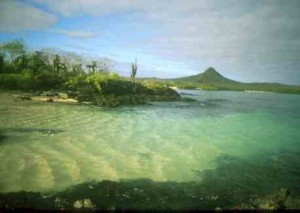 The scrubbed blue sky dazzled as we headed out on the panga through aquamarine waters. Our destination was the Galapagos Islands, a remote region of the world just off the coast of Ecuador. As we neared land, an inquisitive sea lion broke the glassy surface, and watched as our experienced guide, Harry, steered the little boat toward Santa Fe Island to seek out Darwin’s Finches, Land Iguanas, and Flamingos.

Walking quietly up the trail, we spotted our first Land Iguana. A huge male, about three and a half feet long, golden-backed, yellow-headed and lazy, casually strolled by us, only interested in another male emerging from the underbrush.

While the two animals did a slow “dance” that only they understood, we watched in wonder. Eventually the intruder Iguana walked off rebuffed. Though nonviolent, it was a spectacular, peculiar natural show. This otherworldly view exists nowhere else, except in the Galapagos.

The stark, arid Galapagos Islands present a colorful living laboratory, displaying a variety of native and migratory plants and animals. These natural wonders were well chronicled by Charles Darwin. His methodical observations here lead to the publication of “On the Origin of Species” in 1859. The natural unanimity is amazing and welcoming.

I joined a small group of disparate Americans visiting the islands, and we had to watch our feet, careful not to step on sleeping iguanas or resting birds. While walking around a group of dozing sea lions, Jeff Soloway, a writer from New York, smiled and told me, “We’re just another big, harmless beast, like a sea lion.”  Meanwhile, a dark-brown Galapagos Hawk, the islands’ only raptor, watched us intently, standing only a few feet away. The animals seem to understand that humans pose no threat.

In this relatively inhospitable archipelago, the animals have evolved over thousands of years, exhibiting singularly unique adaptations, mainly responding and adapting to environmental pressures instead of predatory threats. Today, most of these animals live without any fear of humans and other creatures. The marine iguanas don’t bother the sea lions, and the giant tortoises, penguins and red-throated frigate birds go about their business even in the direct presence of human visitors. “You can’t see animals and nature like this anywhere else in the world,” said Mark Songer, a visitor from Toledo, Ohio.

On some islands, the tall Opuntia cactus have evolved to produce long sharp spikes as armor against tortoises and land iguanas. However, on other nearby islands without these animals, the cacti have evolved differently; they are shorter and without spikes, because there is no need for protection.

The remarkable plant and animal life, geology, marine environment and crystal clean air offers a study of earth science like no other. Here, nature lives in perfect balance.

Ninety-seven per cent of the Islands are designated as a National Park and a World Heritage Site. The Ecuadorian government, in conjunction with UNESCO, works hard to keep things pristine. All litter, food and other human articles must be kept off uninhabited areas.

The oil spill of December 2000 posed a huge scare; fortunately, the relatively small amount of oil that spilled was washed away from the Galapagos. Oil spill cleanup crews from around the world responded immediately, and rushed in to contain the damage. In fact, some locals believe that the incident may have actually helped the Galapagos by bringing in additional revenue, and by cultivating greater interest.

Nature at its best

People who have never truly appreciated nature would be well served to see the Galapagos Islands. Harry Jimenez, one of the two knowledgeable tour guides on our boat said, “We are trying to increase the consciousness about nature around the world. We want people to take this experience home.”

“We’ll never look at nature the same again,” stated Dr. Connie Agnew, a physician from Los Angeles. Denise Arehart concurred. “People should appreciate the fact that the world is not one big URL.”

Though there are some hotels, especially in the main town of Puerto Ayora, most visitors to the Galapagos tour the Islands aboard ships and boats.  A few large tour vessels ply the waters, but the best way to see and experience the islands is on one of the smaller crafts.

Our boat, the Flamingo I, an 83 ft. motor yacht carries a capacity of only 20 passengers. With an able crew of 11, this vessel provided a pleasant, carefree experience.

“I feel like a pampered pioneer,” says Bloomfield. The passengers enjoyed the sea air, the sun deck, lounge and bar area, swimming off the back and other amenities. However, the intimate cabins, constant gently rocking of the ship, loud whir of the propeller, and abundant, yet only passable food made you realize that this wasn’t a luxury cruise. That isn’t the point. Though the larger vessels may be more comfortable, they have to herd people in and out to meet precise schedules. On the Flamingo I, the schedule was relaxed and somewhat flexible. If a passenger wanted to take additional photos, or swim a bit more, or even sleep in – the crew was accommodating.

Mornings were filled with “wet landings,” where each passenger had to debark off the panga into the gentle surf. Some people did it barefoot, others with sandals or sneakers. Our mornings usually ended with an hour of snorkeling. Giant sea turtles, incredible parrot fish, sea lions, occasional harmless sharks and rare Galapagos penguins zipped by us in the water, unconcerned.

Up closer and personal

Every day brought a different nature walk, and we learned about many of the unusual plants and animals, and even geology of that particular island. Our trek onto Fernandina Island was particularly memorable. We were brought us face to face with thousands of Marine Iguanas basking on the volcanic rocks, and lazily looking us over. Everyone was able to get as close as we dared to these odd creatures, to examine their salt sprayed heads, and communal living.

Afternoons usually meant a dry landing, onto a pier, or rocky outcropping. Our hike up the volcanic cone on Bartoleme was steep, but unforgettable.  A narrow, hot wooden staircase winds its way to the top, where visitors find a magnificent Galapagos vista and enjoy the cool Pacific breezes. From this point we could see the interconnected strips of land and sea, wide swatches of black, green and blue, fused by ancient volcanic tunnels far below the surface.

Our guides began each evening with a brief review of the day’s events. People asked questions, andtalked about what they’d witnessed. After dinner, guests played games, read, watched the stars or spent time alone in quiet reflection. One evening, an impromptu party began on the boat. Beer flowed, Latin music played, and even the captain danced.

“This is one of the true icons of natural habitat,” said Willie Brien as we watched a group of Masked Boobies cavort on the ground one evening. The magic of the Galapagos is genuine; you can touch it, see it, and perhaps even understand it. That’s the main reason these islands are worth protecting, and why the Galapagos should be experienced, first hand, at least a once in every lifetime.

Dear Readers: This post may contain affiliate links, which means we may receive a small commission, at no cost to you, if you make a purchase through a link. All opinions are our own and we only share things we recommend. Thanks for your support.

IF YOU GO TO GALAPAGOS
An all inclusive resource for information and booking can be found by contacting the Florida based, Galapagos Network.

The Galapagos Chamber of Tourism:  https://www.galapagoschamberoftourism.org/

Visitors must first fly to Ecuador. Ecuatoriana, Lan Chile, Continental, American Airlines fly to both Quito and Guayaquil. Though Guayaquil is closer to the coast, the capital city of Quito is a much more interesting city to stop at before or after visiting the Galapagos.

TAME Airlines is the ONLY Airline that serves the Galapagos Islands. It flies from Quito, stops in Guayaquil to pick up additional passengers, then continues on a 1.5 hr flight to the Galapagos. It can be booked through travel agencies and in concert with tour packages.

A valid U.S. passport gets you in to the Galapagos. Citizens of other countries should check with their consulate. There is a $100 per person entrance fee for a foreign tourist, to enter the National Park. Only cash or travelers checks are accepted. However, if you have booked a tour through a group, your tour guides will most likely have pre-paid the fee.

As of the year 2000, the government of Ecuador switched over to the U.S. dollar as its official currency. This makes traveling in the Galapagos, and indeed all of Ecuador much simpler, and the prices of most items are fairly cheap. Tipping, restaurants and bars, and prices for most local items are modest. Tourist items such as souvenirs are higher priced.

The Galapagos islands straddle the equator and makes for year round visiting. However there are slight variations in climate. The rainy season is also the sunniest, and runs from December to May. It is also the hottest time of the year in the islands. The garua (misty) season is from June to November and is less crowded. Many of the elaborate animal mating rituals can be witnessed during this period.

Plenty of sunscreen, sunglasses, a hat, sandals or sneakers, a backpack to carry all of your items on to and off the beaches, cameras and plenty of film.  You may or not be able to buy the film you require so bring enough in advance to capture the wonderful wildlife. It is often stated that photographs, and memories are the only things you are allowed to take off the islands. Nature books are also recommended for help with identifying wildlife.

Fresh seafood is plentiful on all the boats, and towns in the Galapagos. Fruits and vegetables abound such as plantains, beans, rice and hot peppers. The water in the Galapagos is not recommended for consumption by foreigners. Bottled water is plentiful.

Best Eiffel Tower Hotel Room View? Has to be the Shangri-La Paris
Next Post: Rooms with a View at Colorado’s Garden of the Gods Resort