The iguanas marinos (marine iguanas) lay on the ledge, basking in the warming rays of the afternoon sun. Though oblivious to my human presence, they keep one eye on the outcroppings of lava rock speckling the distant shore. Watching…waiting…ready to scatter at a moment’s notice if Tyson, the 4-foot alpha iguana who frequents the hotel, comes plodding out of the surf.

I’m lounging in one of the nearby hammocks, under a covered piazza, enjoying the ocean breeze. I snicker for a second, amused by this comedy of errors playing out in front of me. Just another day in the laid-back island vibe of Isabela, the largest land mass in the Galápagos archipelago.

With a plethora of cruise ships anchored off the seaboard of Puerto Villamil, close to the pier, it’s difficult to really sense the isolation of these famed islands. Though sequestered in the middle of the Pacific Ocean, 600 miles off the coast of its parent country, Ecuador, Isabela reminds me of the Caribbean, with its palpable rhythm, yet unhurried pace.

Wildlife in the Galapagos

That is, until you see the unique resident wildlife: a red-throated male fragata (frigate bird) soaring overhead…a pair of dive-bombing blue-footed boobies snatching their fish dinner from the waves…the long, orange beak of an American oystercatcher bird wading in a tidal pool on spindly legs, hunting for tiny mussels in the wet sand.

In amazement, I watch another marine iguana, a youngster, emerge from the rocks at the water’s edge. He sneezes…then again…spraying the excess saltwater from his nostrils. He moves his head from left to right, slinging droplets of moisture from his spines, eyeing the sky for predators. A Galápagos hawk, perhaps, or the ever-present brown pelican.

Sensing no danger, he skitters across the sand and takes up roost on the nearby ledge. Just like the local reptilian population, I, too, have taken up lodging, for a week here at the Caleta Iguana, a hotel and surf camp situated right on the shore. 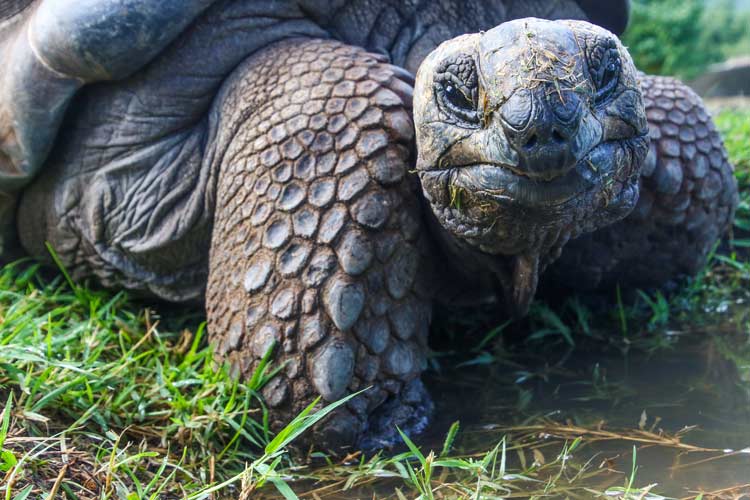 Galapagos tortoiseWith its convenient location at the end of the beach, just steps away from a footpath leading to the tortoise breeding center (la crianza), the bright-fuchsia lodge, frequently called La Casa Rosada (the pink house) is a great home base for your travels.

En route to see the giant turtles, follow the boardwalk past la Poza de las Diablas (Devil’s Pond), for a spectacular viewing of flamingos and Galápagos pintail ducks. Best thing about it? Doesn’t cost a penny.

Or you can rent bicycles from the Caleta for a few bucks per hour. Just up the road, a mere block from your accommodations, lies the trailhead to el Muro de las Lágrimas, the Wall of Tears.

Named for the free-standing partition created from enormous blocks of lava rock, the infamous ‘Wall’ gives testament to the 13 years, between 1946-1959, when Isabela was a penal colony and subjugated its prisoners to days of horrific punishment beneath a scorching sun.

Along the sandy, sometimes gravel, path, you can check out the island’s indigenous scenery: impressive black manglares (mangrove trees), a panorama of candelabra cacti at Poza Verde, a shell-and-sea-urchin beach great for a swim at Playa del Amor.

The round-trip ride to the wall, with all the detours, is about 15 miles, so you just might want to stop to stretch your legs and refresh your spirit at Love Beach.

Back at the hotel, you can unwind from the vigors of the day with an afternoon siesta under a mangrove. After your nap, get ready for a game of beach volleyball, right there at the end of the Caleta bar. You’ll have an audience, like it or not–the last remaining iguanas marinos–before they slowly, one by one, begin the evening’s retreat back toward Devil’s Pond.

For me, languishing in a hammock, watching the waning light play across the horizon, is the perfect ending to an adventure-packed day.

It’s now twilight and ‘happy hour’ (5:00-8:00 daily, except Sundays), here at the Caleta Iguana, and I’m sipping contentedly on my ‘two-for-$5’ frozen daiquiri.

Nightfall’s closing in as Junior, our native Galápagos host and manager of the hotel, throws another piece of wood into the flames…a bonfire on the beach.

Imperceptibly, the island of Isabela drifts off to sleep, lulled into dreamland by the soothing sound of rustling palms and distant waves. The remaining days of my vacation are slowly ebbing, just like the tide.

More articles on travel in the Galapagos Islands:

Up Close and Personal in the Galapagos Islands

3 Reasons to Spend Christmas in Thailand
Next Post: Irish Island of Arranmore Invites Others to Move and Work There