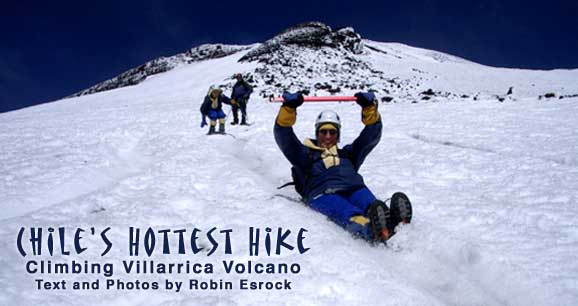 The TV crews were looking for suitable sound bites from travelers booking their one-day hikes up Villarrica, an active volcano in Chile that had decided to erupt that day. All I could say in Spanish was “bueno,” which somehow made it onto the national news that night.I had no idea what the reporter was asking, but it must have been along the lines of, “Don’t you think you’re being a little stupid to climb an erupting volcano?” To which my answer translated as, “Yes.”

Hiking up Villarrica, located 20 miles (32 km) from the Chilean lakeside resort town of Pucón, has been a popular activity for 22 years, since William Hatcher first offered guided tours up the volcano’s steep, snowy slopes. Today there are more than 18 operators in the small town, some of dubious quality when it comes to equipment or safety.

Pucón is cabin country, located in the Lake District, where many Chileans like to go for fishing, rafting and geothermal hot springs. The volcano, on the other hand, draws international travelers like moths to a lava lamp.

“The Chileans come for the lake, the gringos for the volcano, and neither seems to want the other [diversion],” says William in his indistinguishable accent, a cross between U.S. English and Latin American “Spanglish.”

Like me, everyone I meet has come for the volcano, and discovered Pucón’s other attractions almost by accident.

Subsequently, a weekend outing turns into a week filled with river rafting, tree-canopy exploring, horseback riding and lazing about in beautiful, social thermal springs. But at 9,383 feet (2860 m), the volcano looms in the distance like Mount Doom, glowing pink in the afternoon sun like an ice-cream cone.

The morning I decide to hike the volcano, the front page of the local newspaper shows people running from the rim as lava erupts from the crater. William thinks the authorities are being ridiculous. “Every time it grumbles they go crazy,” he says. Villarrica has only seriously grumbled three times in the last 50 years, and not to a level that has ever threatened the town of Pucón.

With this in mind, I saw no reason not to strap up and take a look-see for myself. William’s company, Sol y Nieve, was guiding a group the next day, along with every other operator in town. Rumors persisted that government authorities were restricting hikers from reaching the crater, but like the weather, we’d have to see on the day itself. That night I dreamed of making a premature exit at the hands of an angry mountain, aided in no small part by trucks backfiring on the main road outside my window.

We left early in the morning, supplied with waterproof clothing, razor-sharp crampons, backpacks, ice picks and a protective helmet should we be immersed in lava. I felt in capable hands, as our guide, Oscar, had been hiking Villarrica for ten years, and is a member of the Chilean National Rescue Team. The bus dropped us off at the bottom, where we hitched a ride on a ski lift, taking an hour off the ascent.

It was two hours of hard uphill over ash and granite before we reached the snowline, where we were rewarded with a magnificent view of mountains, lakes and, in the distance, another volcano. As the mid-morning sun burned away the clouds, I strapped on my crampons and started the physically exhausting ascent.

Single file, slow going, I had new-found respect for anyone brave enough to do this on Everest, where the air is as thin as Ben Kingsley’s hair. Finally 984 feet (300 m) from the crater, we reached the boundary set by the authorities for hikers.

Although I had seen wisps of smoke emerge from the crater, it seemed calm enough for the guides to allow us to drop our packs and make a quick, five-minute dash to the rim of the crater.

Putting one foot in front of another required supreme effort, but with my ice pick I felt like a warrior on my way to slay orcs on Mount Doom. That is, until I reached the top, and had to concentrate really hard to not pee in my waterproof pants. The sound of a volcano on the verge of eruption rattles you to your toes.

It is like a lion roaring in your face shortly before it eats you, or the sonic boom of a jet fighter in the pit of your stomach. Loud, deep and primal, but if I listened very carefully, I could just make out the words: “Get off the angry mountain, you moron!”

Contrary to my expectations, there wasn’t a river of cherry-red lava in the crater, but rather, a chocolate-colored rocky filling letting off steam like a geyser. Then it blew, spewing drops of lava and ash 164 feet (50 m) into the air with a tremendous roar.

It seemed to cool off for a few seconds, perhaps deciding whether now was the time to kill everybody, or to just grumble some more. I took some pictures and made a cowardly retreat as fast as my rubbery legs would take me.

I didn’t need to read the newspapers to believe this volcano is as active as a gymnast on steroids. We collected our gear, the guides chatting among themselves, until a low rumble reminded them that we were at the top of a volcano in the midst of a seismic orgasm.

Fortunately, getting down the volcano is the most fun you can have on two cheeks. Narrow channels had been carved out of the snow to bobsled, and I reached serious speed as I flew down the mountainside using my ice pick as a brake.

It only took about 20 minutes for this frozen water slide to deliver me to the bottom of the snow field, a lot quicker than the time it took to walk up. Screaming like a kid, I arrived at the snow-covered rocks, fortunately, without impaling myself on my ice pick.

With the view, the hike, the ski lift, the crater and the great company of my fellow hikers, it all added up to an unforgettable day at what must surely be the hottest edge of adventure tourism.

Guided trips to Villarrica run daily from Pucón, depending on the weather. Be advised that, despite the way it is marketed, you should only attempt the ascent if you are in good physical shape. The trip costs US$ 50-US$ 60, plus an additional US$ 5 for the ski-lift shortcut.

Pucón is located 485 miles (780 km) from the capital Santiago, and is accessible by bus, train and plane.

Vienna Under My Skin
Next Post: Moorish Moorings: Granada, Spain