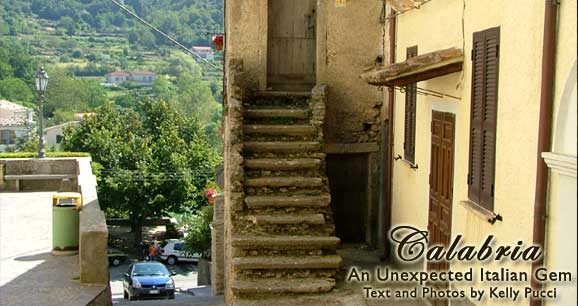 Blame it on a severed ear mailed to a stubborn billionaire more than 30 years ago, but Calabria is better known for kidnappings than hospitality.

In 1973, kidnappers snatched young J. Paul Getty III from his pampered life in Rome and whisked him south to Calabria where he was held for US$ 17 million ransom. His grandfather, J. Paul Getty Sr., who was at the time the richest person on the planet, refused to pay. After five months, the impatient kidnappers mailed the teen’s bloody ear to the Getty family and grandpa paid up. As other kidnappings of wealthy Northern Italians followed, Calabria’s reputation as a dangerous region grew.

Although the crime spree ended long ago, Calabria, the toe of Italy, remains one of the country’s least-visited regions ― a region with sincere people, dramatic natural beauty and ancient religious festivals.

On the second Sunday of September, the 1,400 residents of Falconara Albanese honor their patron saint, Our Lady of Good Counsel, in a religious festival that begins with a solemn mass and a procession through the narrow streets of this mountain town, some only five feet (1.5 m) wide.

As small but sturdy young men slowly carry the serene-looking icon through the narrow, rocky streets of this 17th century town, followed by a marching band playing Sousa music, the faithful shower her with Euros.

While women prepare the Sunday meal of pasta and hot peppers,
the men of Falconara Albanese compete in festival games. Visitors can enter for a chance to take home a prize ― a carton of cigarettes, two pounds of fresh mozzarella cheese or a stick of spicy sopressata, a Calabrian salami ― but cheering for the local boys is more fun than climbing a 30-foot (9 m) greased pole or joining a fierce game of tug-of-war.

In the evening, hundreds of people from neighboring towns squeeze onto the town’s small piazza for a night of fireworks and live music ― everything from hip hop Italian style to traditional songs played on zampognari, crude bagpipes made of inflated sheep skin that produce sounds every bit as melodic as an inflated sheep skin possibly could.

The day after the parade, the townspeople are back to their normal routine. Isolated by its mountaintop location, a 2.5 mile (4 km) drive up a steep road with hairpin (and hair-raising) turns, supplies must be brought to Falconara Albanese. Every Monday morning locals purchase all they need ― fruit, vegetables, meat, fish, cheese, clothing and household items – from a traveling market that’s gone by noon.

Signora Riggio, a retired schoolteacher, often mingles with her neighbors examining goods and exchanging gossip. She seldom buys much; she and her husband grow their own fruits and vegetables in their terraced garden, and pick mushrooms and wild berries along the road, but she searches for brightly colored threads for crochet projects that she gives to her friends and family.

A trip out of town seldom interrupts daily life, but with no year-round restaurant, dining out means a drive down the steep mountain and up another mountain to a neighboring town. For special occasions, there’s La Torretta (87030 Via Torretta) in neighboring Fiumefreddo Bruzio. Every Sunday, Chef Pasquale prepares a nine-course dinner made from local fish and produce. A typical meal consists of thinly sliced salmon, fresh anchovies with pickled onions, calamari and green olives, bite-size crab cakes, steamed mussels with cherry tomatoes, octopus stew with hot red peppers, pan-seared whitefish, chilled poached peaches and green-fig ice.

Between courses patrons enjoy views of the coast 1,970 feet (600 meters) below the steep cliff, and owner Franco Caputo’s commentary on La Torretta’s 600-year history as a prison, castle and monastery.

For casual get-togethers, Fuscaldo Marina, a seaside village, offers several options. The ultramodern café Zucchero (Via M. Vaccari) serves gooey European pastries, smooth gelato and grilled sandwiches. Unlike most businesses in Southern Italy, Zucchero doesn’t close during the traditional three-hour afternoon break, so customers linger over a perfect pot of tea or strong espresso and catch up on their email in the internet room or watch the fish swimming in an indoor pond. Zucchero also has a brisk takeout business selling pastries and candies wrapped in gold paper and red ribbons.

Though it may not be on every traveler’s itinerary, this region of Italy offers an experience all its own. A diamond in the rough, Calabria awaits discovery.