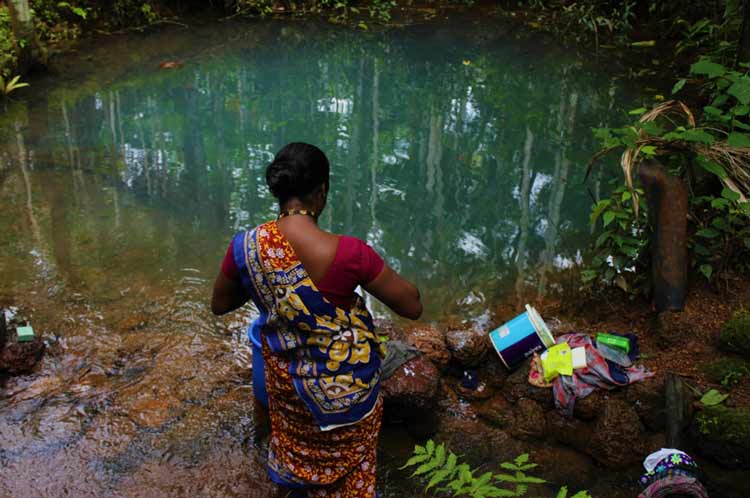 I stood at the epicenter of India’s only Latin Quarter, Fontainhas in Goa, surrounded by a palette of purple, orange, red and blue painted houses topped with ornamental roosters and terracotta tiles.

Boarded windows painted with Christian art were garnished with petals and pots of tulips, a shrine to the quarter’s Catholic roots.

Past the traditional Portuguese taverns and the sweet scent of coconut and cinnamon-infused deserts from the confeitarias, I recognized the tell-tale red streamers and extinguished diyas of Diwali, the Hindu festival of light.

A Visit to Goa

At surface level, Goa appeared to be a lazy sunshine state, a destination of sun, sand and sea, liberalized by the arrival of hippies in the 1960s and a scene for yoga, late-night psytrance parties and complete surrender to the allure of the Arabian sea.

I arrived in Goa, a state on the southwestern coast of India, with the same vision as the Cyclone Kyarr pursuing me, to churn and fragment every preconception I had, and to absorb its essence beyond the coast.

It was in Fontainhas that I first glimpsed Goa’s amalgamation of religions, cultures and histories. Here, the stone-clad arteries of Goa’s heritage village led me to understand the extent to which Portuguese influence manifests in Goan cuisine, architecture and art.

The Portuguese Influence in Fontainhas

At 31 de Janeiro, one of many confeitarias owned by the families of the Indo-Portuguese Catholic community in Fontainhas, I sunk my teeth into traditional Goan sweets and Goan-style pancakes, warm concoctions of sticky layered cashew, coconut milk, egg white and cinnamon.

Named after the colorful contours of the nearby Rua 31 de Janeira Street, and the namesake of the date the Portuguese won independence from Spain in 1640, the confeitaria fused Portuguese cuisine with spices and plants native to Goa.

Yet, when I ventured farther to the local pitstop, Anita Tea House, to sample a traditional Goan breakfast, bhaji pav, I encountered a familiar blend of the pillar spices of Indian cuisine. Cumin, garam masala, turmeric and chili mingled in the Maharashtra-originating thick potato gravy, mopped up with dense bread rolls.

Native and foreign flavors are united in Goan cuisine, whose crown jewels include dishes such as fish curry, pork vindaloo or the vegetarian palak paneer. Like the harmonic blend of cultures in Goa, the food is seasoned with an alloy of spices which is never unsettling and always balanced.

The Portuguese Wanted a Foothold in the World Spice Market

It was Goa’s abundance of spices that first attracted the Portuguese to the region. They wanted to gain a foothold in the world spice market, and spice plantations now pepper the state.

While I was welcomed to Tropical Spice Plantation with the Hindu ritual of marking Tilaka between my brows, inside the Portuguese had infiltrated even the soil.

The local poison, cashew feni spirit, originated from the Portuguese’s introduction of the cashew plant to prevent the erosion of soil by minimizing the effects of flooding in India’s monsoon season.

I was warned of the strength of the Goan concoction. If not for dilution, “it will make you dance without any music,” my guide told me.

The native plants and spices bloom in abundance, too many to name. There was cardamom, pepper, cinnamon, vanilla, chili, coriander, pineapple, allspice and ginger, “the Indian saffron.”

While the aromatic jungle havens of the spice plantations were enough to elevate my senses, in Old Goa the ancient churches and relics of Goa’s past diverted my consciousness elsewhere, to history.

In the space of one afternoon, I beheld the three-story façade of the Basilica of Bom Jesus, a landmark of Christianity, and the architectural wonder of the Mangueshi Temple, dedicated to Lord Shiva.

Cyclone Kyarr was not the only climactic event to coincide with my visit to Goa. On the eve of Diwali, as the sun began to lower over the cerulean sheen of the River Mandovi, a rumble began in the streets of Panjim.

As darkness approached, the streets were lit with diyas and embellished with the colors and swirls of powdered Rangoli.

The radio blare of electronic music and the yells of neighborhood-hopping Goan teenagers were what drew me to the streets, but what rooted me there were the unearthly constructs of demon effigies, propped up by ladders and poles, and fashioned with artistic precision from wood, straw and paper.

Reaching to heights of three stories, the homemade avatars of the demon Lord Narakasur resisted even the downpours of Cyclone Kyarr, as strong an icon of each neighborhood’s workmanship and teamwork as they were a profound symbol of the destruction of darkness and evil.

Sacrificed before the return of daylight, they represented a burning image of light in the darkness.

Effigies Burned on the Eve of Diwali

The tradition of burning effigies on Narak Chaturdash, the eve of Diwali, is unique to the region, a statement of the Goan character and the essence of light, respect and kindness, which prevails in Goa despite cultural and religious differences.

An outlet for local artistic talent, the effigies celebrate the workmanship of the Goan people on a grand scale.

The same artistry can be seen in the brassware of Bacholim, or the handicrafts sold at Anjuna Flea Market: wood carvings of seashells, intricate Goan lace and delicate terracotta.

It was easy to see why the hippies fashioned Goa, a state of religious and cultural harmony, into their treasured home.

Many Goans credit the creation of Goa to Lord Parshuram, an incarnation of Lord Vishnu and the preserver of life. If this is so, he has preserved in Goa a natural harmony of vast inland waterways, cascading waterfalls among towering peaks and fragrant greenery.

The balance of Goa’s natural world, its spices and its unique heritage, is sown into the Goan identity, and the seamless integration of religions and cultures serves as a testament to the Goan spirit of “Sarva Sharma Sarva Bhava.” This attitude, that but for differing religious beliefs and practices, all Goans have the same ultimate destination, I found in the everyday: the cuisine, the art and the festivals.

If only visitors would look beyond the shore, they would find that the essence of Goa is around every corner, in every bite and in every smile.

Helpful websites include the Goa Tourism website and Goa experience. For transport, see the Goa Miles app and the Make My Trip website, which offers useful information on transport, accommodation and flights.

Author Bio: Katie Treharne is a freelance travel journalist and former junior travel editor based in Cardiff, the United Kingdom.

Tips for Attending the Opera in Germany
Next Post: Salento Sojourns: A Journey through the “Heel” of Italy