Like me, you may have visited many of the iconic cities of Europe—Rome, Vienna, Geneva, Venice, etc. But it wasn’t until I took a Viking river cruise that I was able to spend time in the smaller quaint villages dotting the hillsides along the Rhine and Moselle Rivers, and doing it leisurely without huge crowds of the big cities. Certainly, these small towns have just as much history and maybe a little more charm!

At each port, we disembarked for shore excursions with local guides. We walked narrow streets, listening on our headsets while they pointed out distinguishing features, landmarks and fascinating history of these “Hansel & Gretel” towns. After the tours, we had lunch at a sidewalk cafe and then explored more on our own, followed by a late afternoon stop at a patisserie for coffee and pastry. Because. . .it’s the European thing to do!

The old towns are very walkable (if you don’t mind uneven surfaces and hills) and easy to navigate with the help of maps available on the ship. Bustling sidewalk cafes, colorful window flower boxes, half-timber houses, cobblestone streets, and oh, yes, magnificent cathedrals—this is what we found in every town.

Here are some of the river towns we visited.

Strasbourg, France on the Rhine

On the border of France and Germany, this city changed nationalities many times. As a result, it’s been French since 1945 but has influences of German culture, especially in food and wine. The modern city is home to the European Parliament and is the cultural center of France’s Alsace region.

The Ill River bisects the city, surrounding the Old Town that was originally a Celtic village, then a city of the Holy Roman Empire, as most of these towns were. Here we found medieval buildings with the half-timber design where the wood framing is on the outside.

Strasbourg is famous for its Cathedral of Notre Dame, an intricate Gothic construction that took 250 years to build! The magnificent basilica was once the world’s tallest building from 1647 to 1874.

Inside, our guide explained the amazing astronomical clock (requires a ticket that was included in our tour).

Speyer, Germany on the Rhine

The Imperial Cathedral here is the largest preserved Romanesque church in Europe and burial place of eight emperors. They rebuilt it in the 18th century after France’s Louis XlV plundered it and left the town in ruin in 1689. Fortunately, the church was spared during the devastating bombing of WWll.

Today, the town has a delightful cafe-lined square and a huge Technic Museum, if you like aircraft and railroad stuff.

Mainz, Germany on the Rhine

Like most of these historic towns, the Romans established Mainz some 2,000 years ago. We found proof in the Museum of Ancient Navigation where remnants of Roman vessels uncovered while excavating for a new hotel are on display. Other artifacts and displays depict life in the Roman navy back in the day.

Mainz is the birthplace of Johannes Gutenberg, inventor of the movable-type printing press around 1440. The Gutenberg Museum is a must-see attraction, as is the 1,000-year- old Mainz Cathedral.

An endearing set of six little Mainz men invented in 1962 by a cartoonist have become popular cult figures representing the town. Consequently, you will find them in every gift shop and even on the traffic lights!

Koblenz, Germany on the Rhine Moselle

At the confluence of the Rhine and Moselle Rivers lies the city of Koblenz, a quintessential German medieval town. Before we approached it, we passed by more than 20 ancient “fairytale” castles spread throughout the Upper Middle Rhine Valley UNESCO site, many perched high above vineyards that produce the famous Rhine Wine.

Walking the narrow streets, our guide told us a cute story about naughty street urchins known as Schängel during the French occupation. A fountain in the courtyard of the town hall is dedicated to them.

The 2,000-year-old history here is evident in this old Roman wall.

You can’t miss seeing the cable car that spans across the Rhine river to its right bank and the Ehrenbreitstein Fortress, the second largest in Europe. The Prussians built it in 1828 in the footprint of an old one dating to the 11th century. There’s a museum with displays written in German (alas, we couldn’t read them!). And there’s not much to see inside the empty fortress. So, we spent most of our time browsing the charming town.

Cochem, Germany on the Moselle 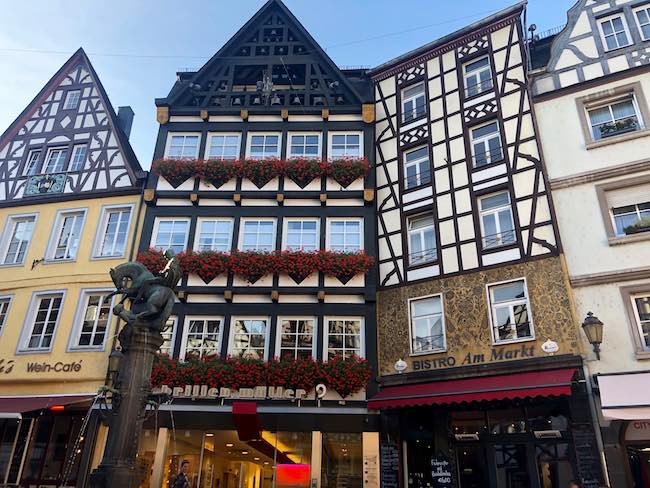 This picturesque little town of 6,000 residents on the Moselle River is closed to cars between 10 a.m. and 6 p.m. during April-October, making it a perfect pedestrian village. The centerpiece of Cochem is the magnificent Reichsburg Castle sitting high on the hill like Cinderella’s fairytale.

Our city tour included a visit to the castle and its grounds. We learned it dates back to 1000. But King Louis XlV destroyed it in 1689 and left it in ruins. It wasn’t until 1868 that a Berlin businessman restored it to live there with his family.

This stone gate is the oldest building in Cochem dating to 1620.

Bernkastel-Kues on the Moselle

This delightful old town is called “The Pearl of the Moselle.” It straddles the Moselle and is famous as a health resort and center of winemaking. Most noteworthy of the well preserved timber houses is the narrow Spitzhauschen built in 1416.

Across the river in Kues we sampled wine in a unique wine cellar built in 1458. Indeed, it was a “help yourself” system. Terraced vineyards on steep slopes produce wines, mostly white, in this region. Grapes are picked by hand. I did not taste a wine I didn’t like!

Trier, Germany on the Moselle

Trier is the oldest city in Germany, founded in 16 BC by Emperor Caesar Augustus as a major outpost of the Roman Empire. The city’s gate, Porta Nigra, stands as a relic of the time.

In addition, there are well-preserved ruins of a 20,000-seat amphitheater, three Roman baths, Moselle Bridge and the Igel Column. Emperor Constantine built many churches here; a few still stand—the Cathedral of Trier and the Liebfrauenkirche, the Church of Our Lady, and Aula Patina Basilica. These are the oldest Roman ruins outside of Rome!

Yet, across the street from the Porta Nigra we found a restaurant that served a delicious German Apfelstrudel!

More rivers are calling me. . .Viking, will you take me to them?

For information on Viking, visit vikingcruises.com.

Claudia Carbone is an award-winning travel writer based in Denver. Read about other places she’s visited in Sleepin’ Around.

Solo Travel: A Brutally Honest Reflection
Next Post: Buckle Up With Bob Iger in the Disney CEO’s Ride of a Lifetime