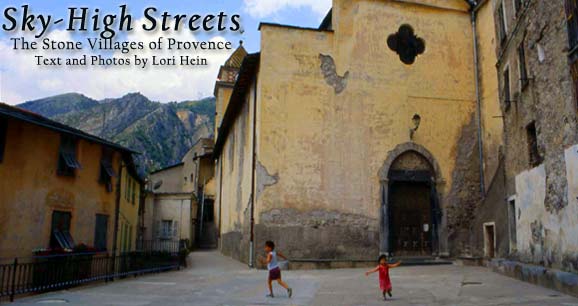 We plucked Provence’s high stone villages like rich olives, savoring each in its turn, appreciating its flavor and character. Each day was a new tasting.

My husband, kids and I were spending two sun-filled July weeks in a rental apartment in Menton, a Riviera beauty spot famed for its fragrant lemon trees. A half-hour drive east from Nice, Menton sits near the Italian border.

Most mornings, we’d wake to sun, sea and the sound of shorebirds and head off in our rental car for a half-day outing to one or two of the old villages that dot the Maritime Alps above Menton.

The distances were small, usually no more than 15 miles, but we kept an unhurried pace on the high, twisting roads and absorbed the views of mountains and Mediterranean that greeted us at every bend.

Each brief, beautiful road trip delivered us to another tiny stone town. We explored them slowly, on foot, allowing each to reveal some of its essence in its own way and time.

In Roquebrune, the woodcarver chiseled, calf-deep in shavings, while passersby climbed the narrow, medieval street and peered into his tiny atelier. Dana, my smallest sprite, conversed with Roquebrune’s cats. They slunk from the warren of passageways, and, as they rubbed themselves against the rock walls of ancient houses, she bent to their level to talk.

In the village square, music from a folklore festival pulsed from speakers hanging in the trees, and the DJ threw candy to a crowd of dancing kids. My Adam didn’t catch any, and he stood in the frenzy and cried. A Roquebrune boy took Adam’s hand and shared what he’d caught. International entente au caramel.

In Ste. Agnes, workmen in cornflower-blue overalls were rebuilding the chateau ruins on the town’s highest precipice. When they tired, they’d leaned on their shovels and looked out over the world that fell away below. They looked south to sparkling Menton, on the sea, then east, following the Mediterranean’s broad arc toward Italy.

A local artist was showing his vibrant work in Ste. Agnes’ cultural center. Kids on a field trip, backpacks bobbing and fingers pointing, crowded the gallery. The village was filled with art lovers who’d come for the exhibition, and the cheese shop enjoyed a brisk, late-morning rush.

We sat on centuries-old cobbles and ate yogurt and bread in Gorbio’s sun-splashed medieval heart. Laundry flapped on clotheslines strung about the town’s high-altitude neighborhoods. Cats played in the arcaded passageways, and Dana chased them up the short flights of ancient steps cut into Gorbio’s alleys, under arches and eaves, past tiny shops and into skinny rock tunnels that wind through the town.

We set out to find medieval Peillon, one of the Alpes-Maritimes’ most spectacularly-sited villages. Near Drap, a tiny sign with a yellow arrow pointed the way up a narrow strip of asphalt. The rich aroma of roasting beans from a small coffee factory filled the air as our car climbed sharp switchbacks.

I inhaled the caffeine scent, and it kept me alert as I we eased the car pushed upward into the mountains.

Peillon, a stone island in the sky, glowed creamy brown in the sunlight. We climbed the staircase streets to the town’s castle ruins and honey-colored church, accompanied by a collie who seemed to know Dana was coming.

He then bounded out of Monsieur Mariani’s sculpture studio and moved to the rhythm of Dana’s small stride. He yipped commentary in canine French. Dana translated: “He says to go this way!”

One bright morning brought us to Saorge, an amphitheater of jumbled beige and ochre buildings framed by olive groves. The town spread itself like a fairytale across the breadth of its perch above the Roya River. When we reached it, Saorge was closing itself up tight for the afternoon hours of dejeuner and rest.

Shopkeepers moved crates of onions and tomatoes inside. They pulled their shades. Hunched women in thick black shoes disappeared behind narrow doors and locked them. We learned townspeople’s names by reading brass plaques affixed to their ancient houses.

Here and there a lace curtain moved, and we’d look into a pair of watchful old eyes. Even Saorge’s birds retreated from the noon sun, and we were utterly alone in the crushing silence of the stone town. Had we not seen Saorge locking itself up, we might have thought it abandoned.

I led my spirited children to the top of the village. At the Place de l’Eglise, we hid from the sun, silence and old eyes in the 16th-century church, its lilac interior smelling deeply of mold.

When I opened the church door and released Dana and Adam to the empty, sun-beaten square, they ran and chased and hooted. I worried and whispered, “Shhhh,” and looked for the parting of lace curtains. The kids’ eyes twinkled as they ran away.

I found them in the square’s far corner, looking up at the only residents of Saorge not indoors for the afternoon. Two brown-eyed boys, standing on the top step of a staircase hewn from rock, were busy throwing colorful water balloons into the empty stone streets below. As each balloon burst, splashing the silent alleys and doorways, four kids belly laughed with pure delight.

A lace curtain parted. I saw old eyes. And a pair of smiling lips.

The seafront city of Menton, 13 miles (21 km) from the airport in Nice, makes a good base from which to explore the villages perched in Provence’s Alpes-Maritimes.

Find information about the many villages at www.provenceweb.

Interhome, at www.interhome.com, has extensive listings of rental apartments in Menton and the surrounding area.