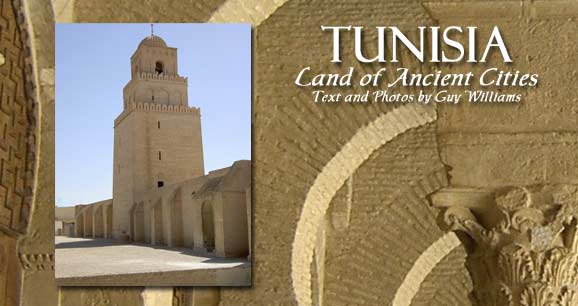 We drove through rolling red hills dotted with stunted trees on an already hot June morning. As we topped a hill on the narrow highway, a towering circle of ancient walls dominated the landscape, reaching skyward from the arid countryside.

The lofty, reddish-brown stone columns and arches were unmistakably Roman. At first glance, the structure seemed wildly out of place, almost artificial, maybe a movie facade left behind when the directors packed up their troupe and headed back to Hollywood.

My wife, Dominique, and I glanced at each other, “wow” smiles written all over our faces.

Walking through the Narrow Street of El Jem

We were just outside the whitewashed village of El Jem, 127 miles (205 km) southeast of the capital city of Tunis, in Tunisia, a small republic on the north-central African coast.

As we walked to the amphitheater through the narrow streets of El Jem, the scope and beauty of the edifice and the sense of ancient times flowed over me.

I walked slowly around the crumbling remnants of the 3rd century Roman structure, searching out details.

Wind and sand have eroded the soft red stone until only a few vague suggestions of carving remain, but size alone conveys the one-time grandeur of this structure, which is almost as large as the famous coliseum in Rome.

I tried to fathom how this sleepy inland town had once-upon-a-time been a metropolitan hub of commerce and luxury, second only to southern Italy in production of olives and grain.

Nothing else could explain the presence of this immense stadium that seated 30,000 people for combat spectacles during Roman heydays.

Tunisia is an exercise in contrasts, with unexpected sights such as the magnificent Roman coliseum accented by modern-day sights, such as the rows of tourist hotels lined up shoulder to shoulder along fine sand beaches bordering the crystal-blue Mediterranean.

My wife and I rented a car and moved at our own pace. It took only a day or so of navigating Tunisian roads to understand that the rules are a little different there.

I quickly understood that lanes marked on the pavement were often viewed by local drivers as highly flexible “suggestions.”

It’s a poor country of people accustomed to walking, and pedestrians use the roads freely.

I learned to keep my eyes open for groups of school children walking home along the roads, slow donkey-drawn carts, bicyclists, small herds of sheep and the occasional escaped camel.

One morning we drove to the famous walled city of Kairouan, among the most holy Arab cities in Tunisia, located about a hundred miles inland, in the center of the country.

Entering the city, we came upon a crowd gathering at the tourist information center.

An official personally welcomed us to the annual Kairouan Carpet Festival, and exclaimed how nice it was to have Europeans come to their celebration.

He produced an envelope from his suit-coat pocket and presented it to my wife with a conspiratorial smile.

Inside the walled courtyard we discovered a party atmosphere. Musicians on flutes, tambourines and an assortment of unfamiliar stringed instruments played traditional Arabian music while brightly dressed veiled women danced in whirling circles.

Camel handlers displayed tall beasts decked out in an array of colorful blankets and jingling bells.

And everywhere there were huge, handwoven rugs displaying the intricate Berber designs for which Kairouan is famous; the city is home to hundreds of shops selling these beauties.

A drawing was underway for lucky winners to take home several of the rugs. We watched as half a dozen German tourists claimed their prizes, some struggling to carry huge rugs back to their bus.

When the final prize was announced, the man with the microphone called out “Number 10!” My wife held the winning ticket, the lucky number 10.

She accepted the gift, an intricately woven wool rug of blue, red and black squares.

The City of 50 Mosques

After a few smiles and words for local TV cameras, we were on our way to explore “the city of 50 mosques,” the spiritual home of all Tunisians.

Throughout the city, delicately carved brownstone columns and arches, and intricate wooden doors can be seen at every turn.

The quiet dignity of the city’s Great Mosque embodies the 13 centuries of culture that cloak this impressive, isolated city.

The need to look back at history always tugs at me, and walking through the Carthage ruins, 11 miles (18 km) east of Tunis, was on my list of “must see” places in Tunisia.

I wanted to stroll the hillsides where Hannibal stood, staring north across the Mediterranean before he fell just short of conquering Rome at the height of his power, 2,200 years ago.

The modern hillside city of Carthage, built on layer after layer of antiquity, overlooks an immaculate blue port.

Scattered throughout the residential streets are partially excavated ancient villas and immense Roman baths where the rich and powerful once gathered to decide the fate of nations, their gigantic marble columns thrusting upward across the street from modest Tunisian homes.

We made our way up to the highest point in the city, where the National Museum of Carthage rests atop Byrsa Hill.

Here, I roamed among hundreds of Carthaginian and Roman artifacts, ranging from massive marble sarcophagi to everyday household items.

Outside, there was a panoramic view of the Mediterranean in one direction and distant inland mountains in the other.

I tried to imagine the Romans arriving in a massive armada of slave-rowed galley ships, storming those beaches in 146 B.C. to burn and destroy the city of their enemies.

A hundred years later the Romans would return to rebuild in their own style, leveling Carthage and constructing a magnificent new metropolis on top of the ashes.

Tunisia is filled with such history. At Dougga, in the hills three hours southwest of Tunis, are grandiose Roman temples and theaters, a forum and refurbished ancient marketplaces.

Three hours south by toll road, the majestic, immense Sahara Desert reaches a finger into the southern parts of Tunisia. Incredible mountains of sand roll across this region, respecting no form of civilization.

A hearty standard consists of a spicy vegetable soup accompanied by grilled meat (lamb, spicy sausage or chicken) served on a bed of semolina pasta.

After a few days we realized there was far too much to see in Tunisia on our short visit, but a week’s tour would give a good feel for this country of camels and couscous with its laid-back style of Mediterranean living.

The country experiences almost no social or political unrest, with a stable government for the past 50 years. Visitors are well treated, because the tourism industry is valued for the thousands of jobs it provides, along with the Euros pumped into a struggling economy.