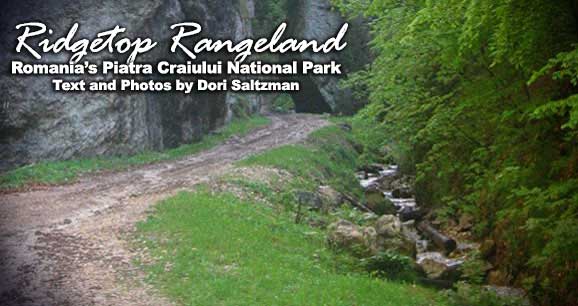 I refuse to die impaled on a cow’s horn after huffing and puffing my way up this mountain, I thought to myself when seven semi-wild domestic cows turned onto the hiking trail and plodded toward us. One particularly large and mean-looking cow stopped and eyed me fiercely while I scurried past.“Has anyone ever been attacked by a cow?” I asked Adi, my guide for my day hike in Piatra Craiului.

“Not that I’ve ever heard of,” he replied nonchalantly. Ah, but he’s only worked for Piatra Craiului National Park for two years. Perhaps a cow attack is recorded every two-and-a-half years and the park is now due for its next cow attack.

I quickened my pace to catch up to Adi, short for Adrian. Adi is not actually a park ranger. He’s officially in charge of procurement and public awareness at Piatra Craiului (pronounced Cry-ooh-loo-e) National Park in Romania, but since the park presently has only one park ranger, he and Bogdan, the digital mapmaker, are frequently called upon to lead guided trips.

For a guy who spends most of his day in the office he’s in great shape, and I struggled just to keep him in sight. The trail we followed was all uphill and very rocky. Adi told me it’s one of the park’s easier trails — though when I looked at the trail map I saw that it is actually marked as “moderate.”

Piatra Craiului (which is the name of the mountain on which the park is situated) encompasses 36,571 acres (14,800 hectares) of forest and alpine terrain. Adi says the park is one of the country’s most beautiful, and the mountain has “the most spectacular ridge in the Carpathian Mountains.” Hollywood apparently agrees, as many scenes from the movie Cold Mountain were filmed here.

Piatra Craiului National Park aims not just to protect the natural environment, but also the local traditional way of life. Two mountain villages are located in the park area, both dating back 1,000 years. Villagers’ cows roam the trails and their sheep graze the meadows.

I asked Adi if he minds the cows on the trails. In my mind they seem to be a nuisance, ripping up the trails with their hooves and leaving behind cow patties, an unexpected hazard to the unwary hiker. Adi was surprised by my question, and noted that the cows are an integral part of the park. They belong on the mountain just as much as the bears, wolves and lynxes that also live in the area.

However, there have been conflicts between the park’s efforts to protect the natural environment and the desire to preserve the traditional shepherding lifestyle. The main problem has been overgrazing. Too many cows and sheep have been grazed on the mountain meadows.

Changing villagers’ attitudes about how many domestic animals should be allowed in the park is a slow and sometimes painful process, but the park expects the new generation of villagers to be more understanding.

We came across a member of the new generation about three-quarters of the way into our hike. After leaving the main forest trail behind and coming out onto a large meadow, we passed the first people of the day, a shepherd and his teenage daughter. Adi greeted them, and received a gruff greeting from the shepherd and a suspicious glare from the girl. I hope the others of her generation show more understanding.

From the meadow to Cabana Curmatura, our destination, the terrain leveled out significantly, and I was finally able to breathe with some ease. The majority of our 4,822-foot (1,470 m) ascent had been completed.

In the distance the Piatra Craiului Ridge was visible, in all its magnificence. The ridge is the mountain’s spine, stretching from one end of the park to the other in a series of steep peaks.

Capped in snow, as they usually are, they are breathtaking to behold. Around five percent to 10 percent of visitors to the park do a two-day ridge trek, in which they hike the ridge from one end to the other, using the Cabana Curmatura Trail, the day hike I was struggling up, as a warm-up.

While not the most dangerous trek in the world, one or two pestickingople die each year on the ridge usually from carelessness and not to the marked path.

We were soon back in the forest continuing our ascent, with the ridge visible occasionally through the spruce and beech trees. As the trail slowly began to even out and I could finally walk more easily, I began to pay attention to the forest around me.

I was hoping to see signs of bears, perhaps claw marks on tree trunks. There are quite a few small brown bears living in Piatra Craiului, but unfortunately, I saw no sign of them. Only the myriad sounds of bird song accompanied us for the rest of our hike.

We finally arrived at Cabana Curmatura, a log cabin-esque structure located about three-quarters of the way up the mountain. It is the stopping point for those on day treks and a resting spot for those doing longer treks. To my surprise, I found cold soda and beer, and some light fare, available at the small canteen inside.

A wooden deck with tables looked out over the park. Colorful tents were gathered nearby and campers sunbathed on the meadow. As we ate our picnic lunch more hikers emerged from the trails, and soon the cabana was alive with the laughter of hikers and campers.

Just as we were finishing our lunch, a deafening crack of thunder announced an approaching storm. Initially undecided as to which was better, try to race the storm down or wait it out at the cabana, we stayed and watched the play of lightning in the distance.

While we waited I took the opportunity to quiz Adi on the park’s natural inhabitants. From research done by the National Forest Service, there are believed to be around 10 bears, 20 wolves and five lynx living in or near the park. Their prey includes chamois (a goatlike antelope), red and roe deer and small mammals.

As we chatted I felt the warm touch of the sun. The sun was breaking through the clouds, and the dark mass that had been headed toward us was breaking up. Knowing that the respite might be brief, we quickly packed up our leftovers and hit the trail.

Going down was so much easier than coming up, until we hit another herd of cattle. One cow and I headed for a smaller path at the same time. Realizing we were both moving in the same direction, we both stopped. She looked at me; I looked at her.

Just as I moved to get out of her way, she also sidestepped. We faced off again. “OK,” I said to her, “you go straight,” I motioned with my hands, “and I’ll go this way,” I pointed to the right.

As if she understood me, she moved forward as I moved to the right, both of us continuing on our way through Piatra Craiului National Park.

Five trails lead to or from the privately owned Cabana Curmatura, so it is a great place to stay for a night. Simple rooms with bunk beds are available inside the cabana. (They cost 125,000 – 525,000 lei; approx. US $4.50 – $19). Visitors can also choose to stay in the campground, and, as there are no set rules about where hikers can pitch a tent, there are several widely used free campsites throughout the park.

Bear-watching options are available to visitors (70 percent to 80 percent of visitors who participate in the bear-watching trips see bears), and the park will soon be offering bird-watching tours. Sightings of wolves happen, although they are not common, and sightings of lynx are almost unheard of.

Escape from the City: A Singapore Bus Ride
Next Post: Beyond the Canal: Panama’s Colonial Capital