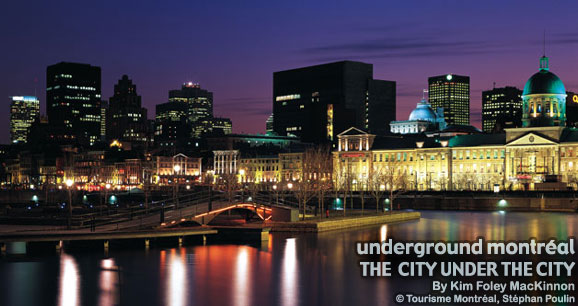 When my Boston friends heard I was heading to Montréal, Québec in January for a visit, they thought I was crazy. Why head to an even colder climate than Boston in the dead of winter? But there are plenty of reasons, and a big one is that it is possible to stay in the city, despite sometimes sub-zero temperatures, without ever wearing a coat or donning mittens, gloves, scarves and all the other endless winter gear required at home. How is it possible? Well, Montréal has one of the most extensive underground networks in the world.

Here are just a few of the places a visitor is able to access in the approximately 19 miles (30 km) of underground pathways:

The list goes on, but you get the idea: there’s plenty to do in the underground, and certainly more than enough for a weekend trip. In fact, there isn’t enough time to do all that you might want to do, so a visitor has to be choosy and plan ahead. And if being underground like a mole doesn’t sound appealing, don’t worry. Many sights are above ground, you just get to them from below, either by walking or taking the métro.

Using the métro can be a bit daunting, but each line is color-coded and Montrealers are usually happy to point you in the right direction. Most everyone in the city is bilingual in French and English. A three-day unlimited use tourist pass is just CAD $16.

On my weekend jaunt, I stayed at the Marriott Château Champlain (1 Place du Canada; 514-878-9000), located downtown and right over the Bonaventure métro station. The hotel is often called the “cheese grater” because of its distinctive windows, shaped like half-moons, which go up its 36 floors. An indoor pool, well-appointed fitness room and a whirlpool are nice amenities, and allow you to exercise without going outside.

Surprises can be found around every corner in the underground, such as a piece of the Berlin Wall (Mur de Berlin), given by Berlin to Montréal for its 350 th anniversary, located in the Centre de Commerce Mondail de Montréal; or the bright pink “Lipstick Forest” (Nature Legere) installation by Claude Cormier at the Palais des Congres de Montréal (52 concrete-cast tree trunks); or, suddenly discovering one of the three ice-skating rinks located indoors.

The Contemporary Art Museum is the only museum in the city that focuses only on contemporary works, with a large portion of its collection done by Québec artists. There are eight galleries with works dating from 1939 (four are permanent). If possible, take a guided tour (offered Wednesday evenings, when admission is free from 6-9 p.m., and on weekends) or opt for the audio guide. The commentary is fascinating.

For those with kids, pick up a free activity kit that makes exploring the museum an adventure. Another fun option for children is “Artistic Sundays,” when they can do hands-on art activities in a studio. La Rotonde, the museum restaurant is ideally located for a view of the Place des Arts. (Admission is CAD $6 for adults; $12 for families; and children under 12 are free.)

The Biodôme is a must if you have children (but fun if you don’t, too!). Four ecosystems under one roof — the Tropical Rainforest, the St. Lawrence Marine Ecosystem, the Laurentian Forest and the Polar World — are complete with the flora and fauna that live there. The Discovery Center is a delight for kids, with all sorts of hands-on activities, demonstrations, books and items to explore. (CAD $6-11.75). The Biodôme, once the cycling track for the 1976 Summer Games, is accessible to the Olympic Stadium, where tours are available.

Shopping is unbeatable in Montréal and the exchange rate is still favorable to those with US dollars (US $1 = CAD 1.23). Many visitors come only to shop here. During my January trip, I found that virtually every store was having a sale, and one of my favorite Canadian stores, Simons department store, was having a huge sale. The weekend crowds didn’t deter me from bargain-hunting. Needless to say, on my return trip home, I had way more stuff than I arrived with.

Towering above the city, and far above the underground, is the restaurant and club Altitude 737 (514-397-0041), which is located in Montréal’s tallest building and offers stunning views of the city and an unusual place to dance. It’s also a good place to shake off any claustrophobia you may have from being underground too long.

While my trip to Montréal seemed all too short (what trip isn’t?), there is one thing I won’t forget, and it is actually something that often takes me to Canada — the unbelievable hospitality — and well, for a lack of a better word, niceness, of the people there.

My last night in town was spent with friends and we ended up at Foufounes Electriques (87 rue Ste-Catherine; 514-844-5539), a famous alternative nightclub in the city, that on a Saturday night, was jam-packed. I had bought a very cute, but apparently flimsy, purse on an earlier shopping foray, and at some point in the night, the strap broke and it fell to the floor unbeknownst to me.

Later, discovering its loss, I figured that it was gone forever, along with my driver’s license, credits cards, cash and cell phone. Still, I called my cell phone and the voice at the other end told me my purse and all its contents were safe. I could retrieve them the next day, which is what I did.

I’m sure not everyone in Montréal would have returned my belongings, but I have to say I wasn’t too surprised when I thought about it. Above ground or below, in a four-star hotel or a punk rock dance club, Montréalers are in a class all their own.