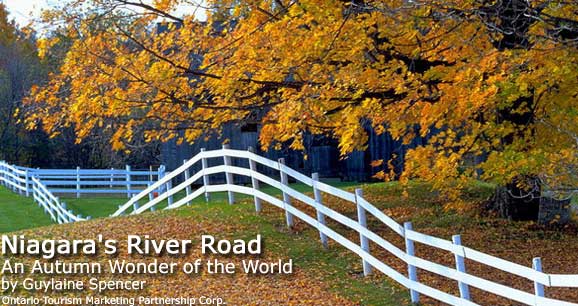 Picture yourself rollerblading through a gallery of Impressionist paintings. Now you’ve got some idea of what it’s like to cruise the river-hugging Niagara Parkway during the brief but brilliant fall-color season.

The route that Winston Churchill called “the prettiest Sunday afternoon drive in the world” puts on its best dress once a year, usually during the last week of September and the first couple of weeks in October. As a native of the region, I can only say one thing to visitors who come to marvel at the famous Niagara Falls: “Don’t miss out on the other natural wonder of our world!”

The historic Niagara Parkway in Niagara, Ontario, which locals call simply “the river road,” follows the winding curves of the Niagara River that divides Canada and the United States as it journeys from Lake Erie to Lake Ontario. Landscaped during the Depression of the 1930s by the provincial Niagara Parks Commission, this well-loved route is used today as much for recreation as for transportation. You can drive the entire 35 miles (56 km) or get off at any point along the way and walk, bike or rollerblade the paved recreational trail that runs parallel to the water.

If you’ve visited the Canadian side of the Niagara Falls, you’ve driven part of this road already ― but only a part. There’s a lot more to see. In autumn, the loveliest stretch is the section that runs between the small towns of Queenston and Niagara-on-the-Lake. Here, the maple trees lining the river create a shifting panorama of red, orange and gold from early to late October. The grass is still green at this time, and the river, glimpsed between the dark tree trunks, is a pale, silvery blue ― the shade you see on antique Norwegian wardrobes or blue cameo brooches.

The blur of color is so dazzling that you’ll probably want to stop and stay still for a while to appreciate the full beauty of the area. There are several scenic lookout spots along the way with small parking areas. From Queenston’s Heights Park, you’ll discover a commanding view of both the river and Lake Ontario. Find a bench where you can sit and contemplate your surroundings, or share a picnic lunch with a companion. The park pavilion offers two restaurants, one casual and one fine dining, both with great panoramic views of the river.

While you’re in Queenston, and still in the mood for appreciating beauty, you might want to stop and visit the Riverbrink Art Gallery, which boasts a fine collection of historic Canadian art, including work by the “Group of Seven” (a group of Canadian landscape painters in the 1920s); Impressionist painter and sculptor Marc Aurèle de Foy Suzor-Côté (1869–1937); Dutch-Canadian landscape painter Cornelius Krieghoff (1812-1872); and Irish-born Paul Kane (1810-1871), who documented the Canadian West in his renowned pictures.

At the north end of the Parkway, where the river runs into Lake Ontario, you come to Niagara-on-the-Lake, a bustling resort town famous for its theater festival — the Shaw Festival — which celebrates the works of Irish playwright George Bernard Shaw, its winery tours, heritage homes, historic fort and flower-filled main street. While the chichi clothing, gift and home décor boutiques along Queen Street are alluring — if damaging to the pocketbook — take time to explore the side streets here, as well. You won’t be disappointed. Lined with early 19th century houses, this is the kind of leafy, picture-perfect neighborhood you usually see only in the movies. Carved pumpkins, wicker rocking chairs and baskets full of red geraniums decorate white clapboard homes with wrap-around porches.

Down at the lakeshore park, you’ll find a Victorian-style gazebo facing the water. This gingerbread confection blends perfectly with the rest of the town, but — surprise! — it’s much younger than everything else. It was built for the movie The Dead Zone, an adaptation of the Stephen King novel starring Christopher Walken, when it was shot here in 1983.

When you have had enough exercise, stop for refreshments at one of the many restaurants in town. The century-old Oban Inn and the trendy Epicurean, with its leafy backyard patio, are popular favorites. You’ll find restaurants and cafés offering seafood, steaks, Italian and Chinese cuisine, and more along Queen Street. If you’re planning to attend the 8 p.m. show at the Shaw Festival, make your reservations for 5:30 p.m. to give yourself plenty of time to enjoy your dinner.

On an autumn day, you can celebrate another natural, local treasure, the grape harvest, by indulging in a glass of Niagara wine. What better way is there to celebrate a brief but bountiful season?