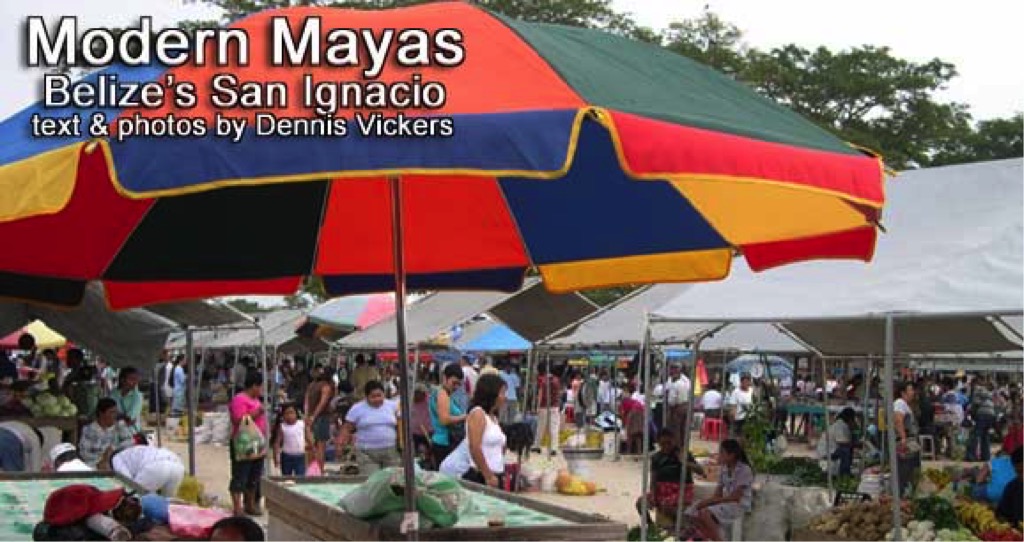 I sit on the curb at the bus station in San Ignacio Town, Belize. The sidewalk is raised a foot (30 cm) above the street, so I’m half sitting, half squatting, watching people, waiting for my wife, Mahrie, who is shopping nearby. Behind me several young guys huddle around a food stand, one working, the others hanging out. Laughing, they shout to young men standing around the competing food stand across the street, “Shaddup!” “Shaddup youselfs!” the competitors shout back.

With 13,000 residents, San Ignacio and its sister town, Santa Elena, make up the third largest community in Belize; Belize City is the largest city, with a population of 58,000. San Ignacio, the capital of the Cayo District, is located approximately 72 miles (115 km) east of Belize City.

The food stands at the bus station serve walk-up customers, but mainly they stock the trays of boys who sell to bus passengers. The buses come in two varieties; express buses are large-windowed, air-conditioned, and carry passengers from one bus station to another; regular buses are repurposed school buses that stop for anyone who hails them. Either way, the ride includes music, whatever the driver likes.

The boys load their trays and hold them up to passengers reaching through the windows. Customers pay with change dropped down. This lemonade stand–style of commerce flourishes despite a handwritten sign taped to the windshield of buses stating, “No Eating! No Drinking!” In Belize, it seems to me that rules of this sort are guidelines posted more for principle than result.

Sitting on the edge of the sidewalk gives me a close-up view of people passing by. Here comes an old abuela, shopping bag in one hand, the other holding her granddaughter’s hand. Both abuela and granddaughter are dressed up, perhaps because it’s Saturday, market day.

The grandmother is short, thick, and sturdy as a water barrel, her brown skin darkened and etched with wrinkles by a life in the sun. The lines radiating back from her eyes are made deeper by the broad smile she beams down at the girl.

The granddaughter is about 6 years old and, like her grandmother, wears a bright, multi-colored skirt and a white blouse with beaded decorations around the neck. There are beads in her hair, splashing color against its dark richness. She strides quickly on skinny legs, taking two steps for every one her grandmother takes.

They’re obviously delighted to be dressed up and out on the town together. I’m struck by the idea that some 60 years ago the abuela was the girl and 60 years hence the little girl will be the old abuela. Some of the intervening steps are evident around me — an attractive young woman in heeled sandals and tight-fitting jeans flirting with the food-stand boys as she walks by; a young mother with three children, one in her arms. It seems impossible she’ll accomplish anything in town; the children require all her attention.

San Ignacio spreads out over seven hills clustered around the Macál River, steep, tall hills that present beautiful vistas of the river valley and into Guatemala, a short distance west.

When Mahrie emerges from the shop with bottles of water to quench our thirst while walking under the tropical sun, we set out on foot to climb one of these hills to visit ruins of a city built by Mayas during the Pre-Classic (2000 B.C. to A.D. 250) and Classic (A.D. 250 to A.D. 1000) periods. The Maya constructed the oldest buildings here before Socrates walked the streets of Athens.

This ancient site is called Cahal Pech, which is both unfortunate (meaning “place of ticks”) and anachronistic, as the name was given in 1950 when the site was a pasture during the first archeological studies.

Some of the buildings are partially restored and show the scale of the original construction. Find a cool courtyard among the ruins and rest on the steps and you’ll form an impression of the human spirits who built these structures, and their love of symmetry and grandeur.

“A card posted in the visitor’s center says there are more ruins of Maya buildings in Belize than modern buildings,” Mahrie says, as we walk down the steep slope back to the center of town.

“Who counted?” I wonder.

My feet are creeping inexorably into the toes of my shoes as we trudge down the steep grade. “Where are the descendants of those people?”

Signboards up and down the narrow streets of San Ignacio advertise places to stay and adventures — canoe trips on the Macál, horseback riding, excursions to the Mountain Pine Ridge (a forest reserve to the south), caving, tubing and visits to Maya sites. Cahal Pech, Xunantunich and Caracol are nearby.

Xunantunich is a few minutes up the Western Highway, a cab ride that includes crossing the Mopan River on a hand-cranked ferry. Caracol is more distant, with most of the trip on an unpaved limestone road, optimistically called an “all-weather road” by many tourism websites. Even so, with reasonable weather and a good vehicle, Caracol is an easy day trip from San Ignacio. The temple there (called Canaa) is the tallest structure in the country, ancient or modern.

Hungry from our day of walking, we find a restaurant near the bus station. It’s called Serendib, the Arabic word for Sri Lanka. They feature Sri Lankan specialties, but also local dishes and sandwiches. The food is good; the service is excellent. Richard, a short, sturdy, round-faced young man tells us he started out selling lumber, but became a waiter because the job fit his personality.

He is warm and outgoing. He and his wife are new parents, and he’s eager to hurry home to hold the baby on this Saturday evening. He folds his arms across his chest and rocks gently to show what he means. Richard grew up in San Antonio, a Maya village nearby, where people predominantly communicate in Yucatec, one of the Mayan languages also spoken in northern Belize, the Yucatan Peninsula and parts of Guatemala.

The 2000 census for Belize counts about 18,200 people whose mother tongue is either Kekchi Maya, Mopan or Yucatec, almost 9 percent of the country’s overall population. Looking around San Ignacio, you see descendants of the ancient Maya builders everywhere, intermixed with other elements of this diverse country.

Because Belize became a British colony in the late 19th century until it gained independence in 1981, English is the official language. Kriol and Spanish are common, but most Belizeans speak and understand English. If you’re English speaking, the logistics of visiting Belize are easy. More importantly, casual conversations are possible, making these warm, interesting people accessible.

At the edge of the downtown area, the open-air market features fresh bananas, mangos and papaya. Ask the vendor where the fruit was grown and how it was brought to market. If you want to make a good impression, ask about his family. In return, be ready to answer his curiosity.

Walking among the stands, it’s easy to imagine the ancient counterpart to this bustle. No doubt the Maya city on top of the hill served the same function as the modernday San Ignacio. People nearby brought their products into town and took home the products of others.

Perhaps there were Maya boys holding snack trays over their heads; perhaps there were grandmothers and granddaughters walking together holding hands. In the ancient market the Maya fashioned relationships that bound the community together; in the modern market their descendants do the same. 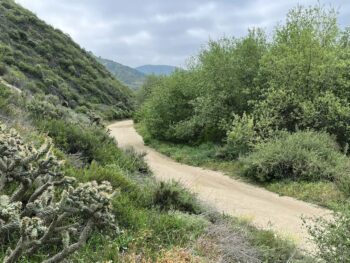