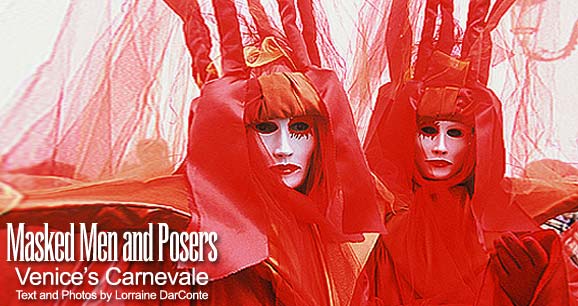 A gust of icy, wet snow rips through the Piazza San Marco, snatches umbrellas from the hands of startled tourists, and recklessly tosses the twisted, mangled remains through the air. A café chair bounces fitfully along the ground as a bright yellow awning flaps and snaps.

It is cold, gray and just plain miserable outside. But despite the wretched weather that keeps gondolas tightly moored to the piers and gondoliers temporarily out of work, the party goes on. It has been said, “All the world’s a stage,” but nowhere is that adage more true than in Venice, Italy, during Carnevale.

The city’s population has swelled to the point of discomfort, made worse by the hundreds of umbrellas that threaten to poke my eyes out. But it’s worth it, I think, as I pass a mysterious man dressed in a dark cape, powdered wig and tri-cornered hat.

It’s like waking up in someone else’s dream — or nightmare, depending on one’s frame of reference.

And everyone who is anyone is here: There’s Marie Antoinette, looking a bit pale, but alive and well and still in possession of her head. A drag queen in a blue-sequined gown dances with a slightly embarrassed young man while three tall men dressed as China dolls scamper about on 6-inch-tall (15 cm) sandals.

The majority of those in costumes are not dressed as anyone in particular; in fact, many barely even resemble people. But it’s colorful and wild and fun, and as English writer John Evelyn wrote in 1646, “All the world was in Venice to see the folly and madness.”

And mad it is. Carnevale (from carne vale, meaning “farewell to meat”) is the traditional period before Lent — and apparently the starting signal to let down both one’s hair and inhibitions. The 18th century Carnevale began on December 26 and lasted almost two months until Shrove Tuesday. Today’s Carnevale is a 12-day affair that is fairly calm in comparison to the debauchery and mayhem of its earlier incarnation.

In fact, things got so out of hand way back then that Napoleon put an end to it … but apparently not once and for all. The event was revived in 1979 to help the flagging tourist industry during the winter months. Needless to say, it’s been a huge success.

Carnevale costumes are best described as creations of imaginations gone a little overboard, if not completely off the deep end. Whether rented, skillfully pieced together from assorted outfits or entirely handmade, they are true works of art.

But more interesting than the elaborate outfits is the posturing that takes place throughout the piazza. Like some bizarre ritualistic mating dance, it begins slowly.

Early in the week, a lone costumed reveler appears seemingly out of nowhere, sidles up to a column under the Doge’s Palace … and strikes a pose. Like bees swarming a hive, tourists and professional photographers alike quickly surround the subject and start shooting. “Madame, Madame,” one photographer pleads, in an attempt to get the subject to turn toward his lens.

It’s the ultimate paparazzi feeding frenzy, with no complaints from those being photographed. In fact, they not only welcome the attention, they actively seek it out, which makes me suspect there’s more going on here than meets the eye. As I tussle with the crowds, jockeying for position to get the best possible shot, I wonder what makes these people tick.

According to psychotherapist Tina B. Tessina, author of It Ends With You: Grow Up and Out of Dysfunction, “In a mask, you can do all sorts of wild things you wouldn’t do in person. The mask gives [people] license to behave outside the bounds. Remember, kings and queens of old held masked balls so they could get away with bad behavior. The point is to behave in ways you wouldn’t ordinarily,” says Tessina, “and be excited by your own behavior, knowing you are watched — [but] not identified.”

And me, I made the mistake of coming as myself. Not that anyone in Venice knows who I am. My friend Erin hands me a black cat’s-eye mask that she purchased before leaving the United States. I slip it on in the spirit of the moment, but it makes me feel more conspicuous than anonymous. Now I think people are staring at me, and I don’t like it. The mask also hinders my vision, making it difficult to look through my camera’s viewfinder, which, I realize, is a “mask” I often hide behind.

My camera allows me to approach people and situations incognito, and bolsters my courage to behave in ways I would not without it. As a photographer, I’m aggressive and bold — anything to get the shot. I suppose I am no different from those in more traditional masks, only we are on opposite sides of the lens.

Impromptu photo sessions crop up everywhere: A mermaid holds court on a fog-infested pier while a pair of jesters in matching green satin pajamas pretends to dance. That is, they strike dance poses, allowing photographers a few seconds to capture the moment. Five seconds later, they change their stance, and turn to face a new group of eager shutterbugs.

These little dances between the photographers and revelers proliferate throughout the piazza — a pose and a gesture followed by the synchronized whir of cameras.

As the week progresses and closes in on Fat Tuesday — the Carnevale’s grand finale — the number of jesters, dukes, duchesses, and strange creatures multiplies. Carnevale is one giant swirl of color and sound; and like a whirlpool, it grabs you by the collar, pulls you under and swallows you whole. There’s no escaping, only letting go. Hence, it’s best just to surrender, for this century’s-old party is likely to continue for yet another hundred years or so, or at least as long as Venice remains afloat.

Tourist Board of Venice
www.turismovenezia.it

From Seattle to Los Angeles by Train
Next Post: Shopping for Jewels, Cambodian-Style