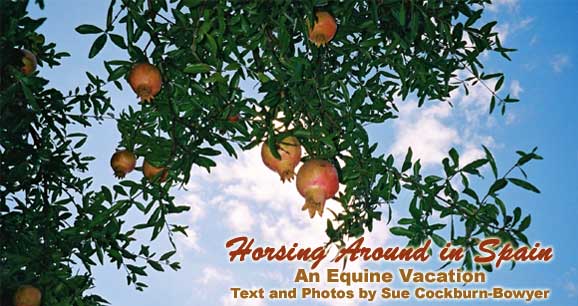 A Morning in Sierra Norte

On a glorious, pastel-colored morning on a farm outside Almaden de la Plata, in southern Spain’s Sierra Norte, I was introduced to my vacation horse.

Originally, I had been allocated Shorty, but he had been ill and was not yet well.“So,” said Natalie, my hostess, “I’ll put you on Biko.

He’s my five year old ― gelded six months’ ago…”Eh?! My stomach somersaulted as I wrestled with the anxiety lodged in my throat.

Riding young horses, particularly ones that were stallions only six months ago, is not something I like.

I am an intermediate rider, but had spent most of last year out of the saddle whilst I recovered from major cancer surgery. I really wasn’t at my most confident.

I had traveled to this remote part of the Andalusia region (about an hour’s drive north of the regional capital Seville) for a five-day horseback riding vacation with Spirit of Andalusia, run by British couple Natalie Blake and Richard Askew.

I had always wanted to visit the medieval city of Seville and to combine that trip with another of my passions ― horseback riding. Spirit of Andalusia offered just that: A week riding and a weekend in magnificent Seville.

Natalie and Richard had started their operation in the beautiful and protected part of rural Seville province only 18 months prior to my visit.

They offer riding vacations from their farm for most of the year except the summer months, when it is far too hot for man or beast.

Iberians are the indigenous horses of the Iberian Peninsula, bred for strength, courage, intelligence, power and fine temperament.

They are often used to fight bulls and to work with cattle. Historically they were the battle horse of choice.

I had not booked any riding lessons, but Natalie is open to arranging personalized itineraries for clients, if discussed in advance.

Richard, amongst many other talents, makes the fantastic picnic lunches we gorged ourselves on each day.

Their farmhouse accommodation hadn’t yet been built, so we stayed in a traditional casa rural, a small family-owned hotel in the heart of the village of Almaden.

Our accommodation was lovely. Very simple, homey and very Spanish, with a courtyard, olive trees, terracotta tiles and whitewashed walls.

Each morning, Richard picked my friend Ann and me up in a four-wheel-drive vehicle. He took us for breakfast in one of the village bars, and then drove us down the dusty tracks to the farm.

And so, I had to face Biko. But my anxiety was short-lived. Biko is an Andalusian.

There is some dispute about the definition of an Andalusian horse, but the term is usually used to refer to an Iberian horse that was bred in Andalusia.

Their qualities are comparable to the Iberians ― strong, gentle, intelligent, fast and powerful.

Biko had slender limbs and a strong muscled body as one would expect from his breed. He was delightful and kind; so I fell in love with him immediately.

The daily treks were varied and interesting, some challenging, some leisurely.

Our routes took us through the shady cork-oak forests of the Sierra Norte, part of Spain’s longest mountain range (Sierra Morena), which separates Andalusia from the rest of Spain.

Here we saw the prized black Iberian pigs that feast solely on acorns, to olive groves where sun-beaten farmers were tending their crop the traditional way ― with a spade and scythe.

The views from the top of each hill we climbed were breathtaking.

One perfect evening we cantered through the cork-oak forest, over little gullies and ditches, dodging the low branches of ripening acorns, the air warm and the sunlight mellowing to a gentle golden glow.

The Andalusian countryside was beautiful ― parched to gold and unbelievably peaceful. This is the stuff that feeds the soul!

Birdsong, our horses’ hooves, and the occasional barking of hunting dogs echoing across the valley were often the only sounds we heard.

Sometimes there would be a goat bleat, a deep bovine moo, or the excited whinnying of another horse on hearing us approach.

Almost everyone appeared to own a horse. Horsemanship is a huge part of the culture in this area of Spain, as is bullfighting (some horses are used for training the bulls) and flamenco dancing.

Andalusia is a poor area of Europe, and horses are actually still used as a means of transportation for some people. We even found one horse “parked” outside our pension one morning!

The horses were a pleasure to ride and virtually bombproof. We galloped over farmland with farm dogs snapping at our heels, shuffled down steep descents and strode up long ascents.

We trotted passed hunting kennels, sending whole packs of dogs into frenzied barking, alerting shy wild deer to our presence in the Parque Forestal, one of Spain’s many National Parks.

We wandered over pastures where goats and toffee-colored cows either scattered on seeing us, or looked up at us with lazy curiosity.

After a hard morning’s riding in the Spanish sun, what lunch could be better than perfectly chilled gazpacho, crusty bread, warm tortilla, and Tinto Verano (an Andalusian summer-drink of Rioja wine and lemonade), followed by a shaded siesta under a giant oak tree?

Natalie personally trains all her horses and they all have superb manners. They are fit, responsive and very, very happy, with acres on which to run about, including a pond to splash in at the end of the day.

I have never seen horses so relaxed and joyful, rolling in the summer dust each evening after a cooling dip in their pond. Even sick Shorty had a roll ― an encouraging sign.

At the end of each day we eagerly helped out with un-tacking, (you can do as much or little as you wish!). We washed down our horses and helped feed them.

Our informal evenings were spent at cozy restaurants and bars in the village, eating alongside the locals under the stars.

The menus were local and seasonal, and always featured the Andalusian speciality of jamon ― the ham made from the acorn-feeding pigs we encountered on our daily horse treks.

We ended our trip with the promised two days in Seville ― the capital city of Andalusia. With over 3,000 years of history.

It is a beautiful, magnificent, romantic, Baroque and Moorish City, with fantastic shops and plenty of culture, arts, museums, cathedrals and ancient buildings for those who like sightseeing.

Down cobbled streets are amazing hidden churches. There is a huge bull ring, numerous bars and restaurants, as well as green spaces. Transport around the city is in horse-drawn carriages or air-conditioned tourist buses.

We took that option in the 111 F (44 C) heat. The best end to the day was to watch the sun go down over Seville’s Guadalquivir River, casting its romantic pink haze over the city.

The Sierra Norte is part of Spain’s longest mountain range, the Sierra Morena, which separates Andalusia from the rest of the country.

Other cities well worth a visit in Andalusia besides Seville are Jerez (where sherry comes from), Cadiz, Cordoba and Granada.

The pension where we stayed was part of the tour package. Future guests will stay at the farm when the farmhouse is built.