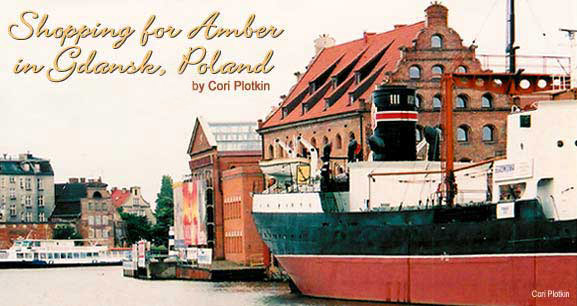 Achilly, light rain falls as we join the throngs of people huddled under colorful umbrellas on the crowded cobblestone streets of Gdansk. We meander past store after store, which all look the same. Each shop claims to have the “Best Amber in Poland,” or the “Most Unique Pieces.” With countless options, I walk into the first store on the block and encounter wearable pieces of art like I have never seen before.

A bus had transported my family and I from our cruise ship in the port city of Gdynia, Poland, to the small city of Gdansk, which is one hour’s drive inland. As we drove past Polish towns with run-down, gray buildings, reservations had slowly filled my head.

It wasn’t until we reached our destination in Gdansk that a different vision of Eastern Europe began to emerge. The Gothic-style buildings, vibrant with color, and the castle-like towers and archways gave the city a fairy-tale essence.

Located at the mouth of the Vistula River, on the Baltic Sea, the city of Gdansk is the capital of Poland’s Pomorze province. Dating back to the first century, the city’s ancient architecture is reminiscent of times past. Home to nearly 500,000 residents, Gdansk is a far cry from the gloomy stereotype of Eastern Europe.

Now, as my mother and I peruse the shops, my excitement rises as I ogle the mass assortment of amber jewelry displayed on wooden carts and in shop windows in every direction. I feel like a child in a candy store, not knowing where to begin. Rows of earrings overwhelm the senses, while bracelets line the shelves beside a glass case full of necklaces and unique brooches.

The smoothness of one gem contrasts with the rough, uncut stone just beside it. While one pendant shows off its deep yellow color, another one displays a bright green hue.

Aside from countless styles of jewelry, these “amber galleries” have everything from artsy picture frames to flatware, all donning the always-different stone. The prices of these pieces range from a few U.S. dollars to a couple thousand, the price tag most often reflecting the uniqueness.

While amber’s best-known color is a deep gold-brown, it varies from misty yellow to bright orange to speckled green. Amber is the fossilized plant resin of ancient trees, which commonly range from 30 to 90 million years old. The Baltic nations (including Poland) are well-known for amber, which is found along the coastline in quartz sand or in shallow water, as well as in inland clay deposits.

Amber from the Baltic Sea region has been admired and used by humans since Prehistoric times. After the two world wars, amber exports declined sharply in Poland. It wasn’t until the 1980s that the mining of the gem once again became lucrative.

After wandering in and out of dozens of stores and looking through the wares of myriad vendors lining the streets in front of the stores, I walk into a small shop on the Gdansk waterfront.

As I browse through the massive selection, one piece catches my eye: A bright turquoise mother-of-pearl is engulfed by an array of amber pieces forming the shape of a flower. I rub my fingers over the smooth gem, and as I fasten the clasp around my neck the warmth of the amber travels through my body.

The young woman behind the counter smiles as I turn from side to side in front of the small mirror in the minute shop, catching myself from every angle possible. My heart flutters as I realize that I’ve come across something unusual, perhaps something no one else has. After a small amount of haggling over the price of the necklace, the clerk offers me a 10 percent discount since I am paying in cash — a common occurrence in the stores, as well as on the street. For less than US $200 I have found what I didn’t even know I was looking for. And as an added bonus, my necklace comes with an authenticity certificate, something that many of the stores provide.

Many of the vendors on the street sell less-expensive and less-original pieces. But beware, some of these “cheap” pieces (starting at as little as US$ 2) can be imitation amber. A number of stores demonstrate a simple, practical method of determining the authenticity of the stone. The amber is placed in salt water with various other metals and plastics. If it floats, it is real; if it sinks, its authenticity should be questioned. And obviously, if the piece has a “Made in Taiwan” sticker on the back, it’s not authentic Baltic amber.

Despite the occasional fake amber, there is really little difference between the stores and galleries, and the street stalls. It is not uncommon to come across a US$ 300 piece of jewelry from a street vendor that is equal in quality to one found in a store.

Amber is a huge draw for tourism in Gdansk. Aside from the street stalls and art galleries on the densely tourist-populated waterfront and Long Street, or ulica Dluga, Gdansk has various other sites dedicated to amber. The Amber Museum, a part of the Gdansk History Museum, in the Town Hall, of the Main City, focuses on early and contemporary amber art as well as amber in its natural, uncut state.

St. Bridget’s Church (ulica Profesorska 17) is another must-see when touring Gdansk. Inside its walls, an intricately carved amber altar is currently under construction. When finished, it will purportedly be the largest altar of its kind in the world.

Months after I have returned home to the United States, I wear my amber necklace proudly and smile at the memory of the Eastern European adventure that yielded Baltic Gold.

When shopping in Gdansk, it is a good idea to carry cash with you as many of the vendors will offer a 10 percent discount when items are purchased with cash. However, most stores do accept all forms of major credit cards.

Websites offering instructions on how to test the authenticity of amber: