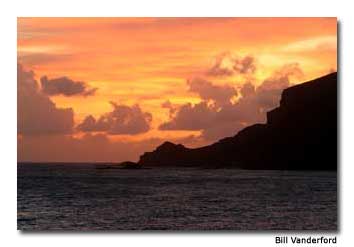 Brilliant streaks of gold burst through the fluffy clouds and illuminated a line of coconut palms, which assured early risers on the Aranui III that we were nearing Fakarava, the second-largest Tuamotu atoll and the first stop of our journey through the exotic isles of French Polynesia. This was just the beginning of a 14-day, island-hopping trek through the fabled Tuamotu and Marquesas archipelagoes of the South Pacific, aboard the passenger freighter Aranui III.The 386-foot (118 m), 207-passenger vessel was custom built to serve the tiny ports it visits, bringing goods to French Polynesia islanders. While the true business of the Aranui III is to haul much-needed freight to and from the picturesque isles, thanks to a unique design, the ship provides visitors with a chance to be a part of a working vessel, in a graceful style. Most passenger cabins have windows.The vessel has an outdoor swimming pool, as well as a lounge, gym and library. Passengers can take part in fishing and snorkeling, and guest lecturers and onboard experts offer detailed information about the culture and history of the Marquesas ports, and Polynesia in general.

Dawn was breaking over the Fakarava atoll as we steamed into the inner lagoon through a wide cut in the reef at our first, brief stop of a journey that would eventually crisscross an area roughly the size of Western Europe.

We anchored in a crystal-clear, turquoise-colored lagoon several hundred yards from a white, coral sand beach before going ashore in wooden whaling boats.

Fakarava is the commercial center of the Tuamotu group of about 80 coral isles. Friendly native merchants had “set up shop” under the shade of coconut palms near the beach, and displayed their creations made of wood, shells, bone and black pearls.

Many of the passengers browsed the merchandise, while others snorkeled or swam around coral formations in the warm, clear waters of the huge lagoon. A picnic lunch of local fish was served under a thatched canopy, accompanied by island music provided by a ukulele band. After exploring, swimming, or resting in the shade, it was into the whaling boats and back to the ship.

The anchor was lifted, and we began the longest stretch of the journey at sea. We would see nothing but wide-open seas and miles of blue water for the rest of the day, the night, the next day and another night. Then, at daybreak, we witnessed the sun coming up over Ua Pou, the first of the 12 volcanic Marquesas islands we would encounter.

The majestic island has a dramatic skyline of obelisk-shaped columns, jagged cliffs and cathedral-like spires. The contrasts of the blue ocean, the brilliant greens of the island and the towering peaks that encircle Hakahau Bay were spellbinding.

From Ua Pou, we went to Nuku Hiva, the administrative capital and the largest island in the chain. There, near the deep bay of Taipivai, Herman Melville was inspired to write his famous Typee, in 1842. For the passengers on the Aranui III, it was a chance to do some banking, use a very slow Internet system, or sit back and watch the precision of the ship’s crew loading and unloading much-needed freight for the island people.

The next stop of our expedition brought us to Hiva Oa, the final resting place of artist Paul Gauguin and Belgian singer Jacques Brel. Though buried 75 years apart, both of these men spent the last few years of their lives on Hiva Oa, and they are buried very close together in an old cemetery at Atuona, high above the pounding waves of the ocean.

We then made a short southeastern passage to the small, mostly undeveloped island of Fatu Hiva. This is one of the last places in the Marquesas where women still make tapa cloth, a paper-like product that was once used for clothing, but is now more popular for artwork. After skinning the bark from trees, the women pound it for hours with flat sticks of ironwood to produce tapa, a strong fabric.

The women of Fatu Hiva are also well known for wearing umuhei in their hair. These sachets, made from aromatic plants, are said to have extremely strong powers for attracting men.

After leaving the beauty and tranquility of Fatu Hiva, we returned to Hiva Oa, this time on the opposite side of the island, where we docked at the port of Puamau. On an archaeological site in the hills above the open ocean, we walked among the largest tikis (Polynesian godlike statues) in the Pacific. The biggest tiki ever found in the Marquesas Islands was discovered in Hiva Oa ’s Puamau Valley; it stands 7.7 feet (2.35 m) tall.

While we visited the island of Tahuata, a Marquesan festival was being held at an ancient sacred site in the hills above Vaitahu. It was wonderful to see islanders from all over the Marquesas Islands competing among themselves in a natural setting, wearing native costumes and following customs that have been handed down through the generations.

When we returned from our trek to the festival grounds, the village of Vaitahu was alive with offerings of native cuisine, merchants from every island selling their handicrafts, and island music drifting through the warm, tropical air.

After an all-night voyage we reached the island of Ua Huka and the mouth of Vaipaee Bay, a narrow fiord known as the “Invisible Bay.” Those who came on deck to watch were rewarded with an unbelievable show of maneuvering expertise. With less than 10 feet (3 m) on either end of an almost 400-foot-long (122 m) ship, the captain and crew turned the vessel 180 degrees until it faced outward toward the open sea, and then tied it with huge cables between the two shores.

When the Aranui III was secure, we were driven across the island. It was immediately obvious that this island was far more arid than the other islands in the Marquesas chain. The road followed the tops of the ridges with breathtaking vistas of the sea below, and wild horses and goats grazed on the steep hillsides.

After we visited a couple of local handicraft markets, an elaborate Marquesan lunch was prepared by the villagers of Hokatu. We then swam and body surfed at a gorgeous, rocky beach until the whaling boats picked us up for our next leg of the trip.

Before departing the Marquesas Islands for the last time, we made a quick return trip to the capital at Nuka Hiva to load more freight, and then on to Ua Pou again to leave our local guides, Pascal and Didier, on their home island.

Another full day and night of sailing brought us to our last stop, Rangiroa, the largest atoll in the Tuamotus and one of the largest in the world.The jade-green and turquoise colors of the lagoon are spectacular, and its tranquil waters are famous for producing perfect black pearls.

With the Aranui III anchored just off a shallow, coral beach, we went ashore to visit a pearl factory, do some shelling, and snorkel in the crystal-clear waters of the lagoon. Our last native lunch was served under sheltering coconut palms before we took our final whaling boat ride back to the ship.

Dolphins cavorted alongside the Aranui III as we slipped quietly out of the lagoon through a tiny opening between the two villages of Rangiroa and headed out to sea and to the island of Tahiti, the departure point for most of us.

10 Things You Didn’t Know About … San Francisco
Next Post: Tea Time: Sippin’ at The Ritz in London