In his book “Tristessa,” a novella about life and love in Mexico City, Jack Kerouac, while describing the protagonist, writes, ”she spoke with great melancholic voice like Luise Rainer,  sad-faced Viennese actresses that made all of Ukraine cry in 1910”.

At the time, I happened to be in Ukraine. I put the quote to my girlfriend to see if she knew what event Kerouac was alluding to. Tumultuous amounts of research followed to no avail. But one comment she made struck me and ignited a dormant obsession within me.

”Well, Western Ukraine was part of Austria-Hungary at that time.”

Of this detail I was unaware. What I was aware of from an early age, was that a multi-ethnic empire once lay in Central and Eastern Europe.

Known as Austria-Hungary or the Austro-Hungarian Empire, this region stretched across the continent. German and Hungarian were the predominant languages, but by no means the only ones.

Czech, Polish, Slovakian, Italian, Serbo-Croatian, Romanian, and Yiddish could also be heard in the far-flung regions of the Empire. In 1918, after the war they were so keen to instigate, Austria-Hungary was no more.

In its place, new states were birthed, like Czechoslovakia, Poland, Romania and the now smaller Austria and Hungary. In the grand scheme of things, 100 years is not such a long time. 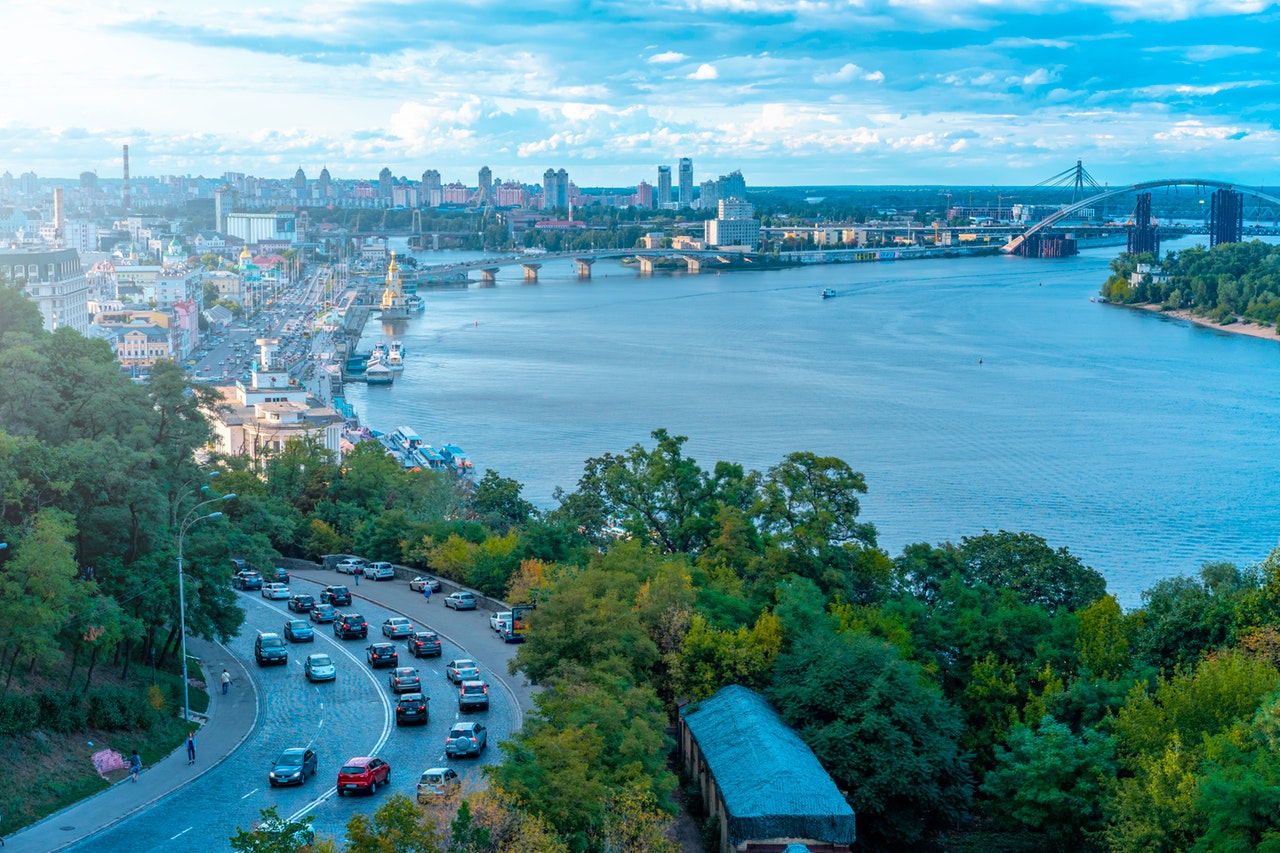 Traveling Across the Former Austro-Hungarian Empire

If I traversed the lands of the former Austria-Hungary, also referred to as the Dual Monarchy, would I see any physical or mental reminders of that time?

I was also curious to see if I could find any similarities in these different countries. So, I decided to hit the road from west to east and set out for Lviv in Western Ukraine from the Adriatic port of Trieste.

My bus began its descent down a network of spiraling, cliff-side roads high above the Adriatic. In the distance, large cranes lifted freight from ships in what was the Empire’s largest port.

The bell towers of churches rose above the skyline and looked down onto the Cypress-lined roads, a view that harked back to a different Empire, that of Rome. Despite being mid-spring the weather wasn’t very kind, and despite being Italy, Trieste didn’t feel very Italian.

Due to its location, its history has been heavily influenced by Germanic, Latin and Slavic cultures. For me, it felt somewhat Austrian. Grand, but not imposing. Imperial, but also coastal.

Perhaps it was its Italian nature that gave it its refined edge. Large squares were called Piazzas, yet they all had the essential Viennese look.

Trieste was a symbol of the multicultural Empire it found itself in. I walked along the harbor wall and stared across the sea. My eyes were looking west but my mind was moving east.

The Istrian Peninsula, most of which now lies in Croatia, shared a similar trait to Trieste in that it didn’t particularly look or feel Croatian. Here, too, clues of Rome could be found, but it was clues of Vienna that I sought. Much to my joy, small reminders began appearing in different, unexpected forms.

There was the picture of Empress Maria Theresa that hung on the wall of an atelier in Rovinj. The outskirts of Rijeka were dressed in the unmistakably yellow shades of imperial Hungary.

A former military barracks built by the Austrians in Pula now housed a cultural center and theater. Slowly but surely, fragments of Hapsburg life began appearing and I became entranced by the archetypal Austro-Hungarian aesthetic.

A couple of uneventful nights were spent in wet and windy Zagreb before I met up with my girlfriend for a weekend in Budapest, Hungary. The small reminders I found in Rijeka were now to be found on every street corner.

Looking across the Danube from Pest, I found what was surely an inspiration for Wes Anderson’s colorful and symmetrical masterpiece, “The Grand Budapest Hotel.”

Hotel Gellert stands proud and resilient over the banks of the Danube on the ancient Buda side and radiates in its grandiose, sophisticated glow. I would stretch my legs along the river in the evenings, allowing the spirits of history to guide me around this architectural paradise.

The Austro-Hungarian Compromise of 1867

The Austro-Hungarian Compromise of 1867 saw the Kingdom of Hungary regain its control over previously Hungarian ruled lands while becoming a dual monarchy in all but name.

Franz Josef remained Emperor, but also became the King of Hungary. The compromise was seen as a way of quelling the rise in nationalism that had engulfed Europe since 1848.

Large swaths of Transylvania, today part of Romania, came under rule from Budapest, as did parts of Slovakia and Ukraine, lands with small Hungarian populations. Another region that fell under Hungarian rule was Northern Serbia.

Deliblato, before the annexation of Bosnia and Herzegovina, was one of, if not the most southern point(s), of the Empire. For centuries the Serbian lands were invaded from all sides, most notably from the south by the Ottoman Empire.

With them, they brought their religion, culture and customs, notably to Bosnia, Albania and Macedonia, but in Serbia their lasting legacy was coffee. Our mornings were spent in the courtyard with many cups of freshly brewed Turkish coffee.

For the time we spent there it became a daily ritual. During these early morning ceremonies, Boris, our host, would teach us about the Ottoman times and, more recently, Yugoslavia.

I was aware that we laid within the boundary of the Austro-Hungarian Empire too, and asked Boris if any clues of that time remain. It just so happened that a stone’s throw away from the farmhouse stood a plush, verdant forest that wouldn’t look out of place in Tyrol. On this spot once lay Europe’s largest sand dunes.

The Austrians saw the potential of the land and wanted to put a stop to the traveling sands, so seeds from Tyrol were brought to Serbia and now, more than 100 years later, it is the largest forest in Northern Serbia.

Hitchhiking through the Slovakian Heartland and Tatra Mountains

Time and money were beginning to run out. I needed some cheap accommodation for a couple of weeks before the final moves toward Ukraine were made. I found a hostel to volunteer at in Budapest, essentially killing two birds with one stone. I took advantage of this break and took some much needed rest.

The next leg of the journey entailed catching a bus out of Budapest to the Slovakian town of Zvolen. From here I would hitchhike through the Slovakian heartland and Tatra mountains toward Krakow, from where a few days later I would take a train to Lviv and conclude my Austro-Hungarian journey.

The hitch began well, as I was picked up quickly after a long walk. The day was clear and sunlight was heavy; so, too, was my backpack. I stood by a river outside Banska Bystrica for around two hours, a longer wait than usual.

I contemplated the possibility of being stranded until a hairy-chested, sweaty elderly man pulled over in front of me. I thanked the powers that be, jumped in and shook his hand, both of us smiling. He set forth for Ruzomberok at a blistering pace.

Stepan wasn’t much of talker. We conversed in a mild impression of German and I told him about my route of return to Ukraine. He nodded enthusiastically.

“Sehr gut!,” he said often. He ended a period of silence by asking if I’d like to see a beautiful village on a mountain. I agreed to it and we wound our way up a wooded hill into a clearing. We parked and continued uphill on foot.

He bought me a shot of honey liquor at a stall, then brought me to a museum exhibiting traditional Slovakian dwellings, before leading us, intentionally I hoped, to a bar. He gifted me with another shot, this time homemade plum schnapps and as we walked back to the car, the German chatter began to flow.

He offered to let me stay in his house as a moody cloud of rain approached. I declined kindly, as at this point I was in a race against time to reach Krakow. He understood, and I sat stricken in the front seat by this stranger’s kindness.

Thanks to a couple of Polish truckers, I arrived in Krakow the next morning and headed straight for my favorite bookstore in Europe, Massolit. The previous month’s long hauls began to take their toll on me.

My body was tired. But my mind was replenished and invigorated. Movies and photos had exposed me to a world full of architectural pleasure, revolutionary art, high culture, imperial cities and landscapes of huge variety, a world that ultimately no longer existed.

The landscapes live on in altered states but the history remains the same. I could traverse these lands for the rest of my days, and while small reminders can be found here and there, this was a world whose zenith had come and gone.

I enjoyed the final few glimpses into the past of the Austro-Hungarian Empire in Lviv, my sort of end point. Home was in Kyiv so there was one more train to catch. The fading light cast it’s last nostalgic rays of light onto the city, allowing a final look into the past through the murky waters of what the future was to bring: the specter of Communism.

Author Bio: A seasoned traveler, Stafford has lived in 10 countries across three continents. After finishing his journalism studies he moved to Costa Rica to volunteer in a national park. From there he moved to Germany, Ukraine, Hungary and now resides in the Czech Republic. A collection of his writing can be found on his blog (mundialmusingsblog.wordpress.com).

Top 10 Things to Do in Trieste, Italy
Next Post: Historic & Haunted? 5 Questions for The Stanley Hotel