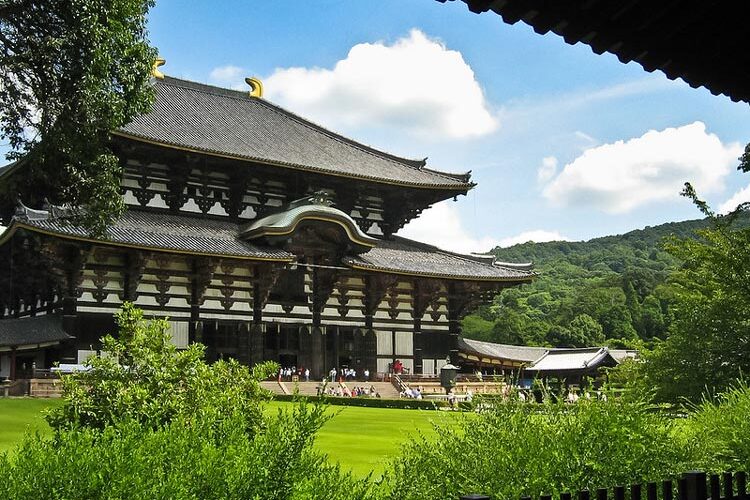 A huge historical statue can attract many travelers. The Great Sphinx of Giza in Egypt, the Statue of Liberty in New York and Lord Murugan Statue of Batu Caves in Malaysia are good examples.

In Japan, the Great Buddha of Todaiji Temple in Nara Prefecture first comes to mind. Even for the Japanese, it is one of the top destinations in the Kansai region, which lies in the central-southern region around Osaka. It should definitely be a must-see venue for your Japan trip.

Great Buddhas: Relics from the Past

Speaking of size alone, other huge statues of Buddha in Japan are taller and bigger than the Todaiji Buddha, which has a seating height of just 14.98 meters (about 49 feet).

Such huge Great Buddhas, however, only have a short history. The Great Buddha of Ushiku Memorial Park, for example, was built in 1993. To put it bluntly, the statue has no historic incomparable value.

The Great Buddha of Todaiji Temple, on the other hand, is the very relic from the past. Its Colossal Hall called Daibutsuden was built in 751 and the body of the Buddha statue was molded in 749. And, finally, eyes were put on the great statue in 752 to welcome the Buddha’s soul.

Unfortunately, the Great Buddha and its Colossal Hall burned twice in their history. The second fire caused by the domestic war in 1567 almost destroyed the huge statue. The makeshift Buddhist sanctum shortly after the disappearance emerged but it also went into ruin due to a huge storm in 1610.

Complete reconstruction needed an immense amount of money, and a high-ranked monk created a number of campaigns at Edo (now Tokyo) and Osaka, in which he delivered Buddhism lectures and exhibitions of treasures from Todaiji Temple to believers. After succeeding in earning enough money through the campaigns, the monk started rebuilding the Great Buddha in 1684.

Seven years had been required for restoring; and the huge statue sprang back to life in 1692 when the eyes were put on the face to welcome the Buddha’s soul. Colossal Hall also revived in 1709.

The statue and building were designated a National Treasure in 1952 and a World Heritage Site in 1998.

Nara Park Surrounding the Statue is a Perfect Destination

Todaiji Temple itself is a must-see destination, but the temple belongs to Nara Park, a large park with 528 hectares (1,304 acres). Historical holy sites, such as Kofukuji Temple and Kasuga Shrine, beautiful mountains and the National Museum in Nara are also part of it. Most of them as a whole are also designated World Heritage Sites and can be the ideal destinations for your Kansai trip.

Some travelers familiar with Japan may know that the other icon of Nara is deer. Nara Park is their home and you can easily toss them snacks. They become attached to travelers, but they are wild animals. Surprisingly they are natural treasures of Japan and travelers need to pay attention to the way you treat them.

Doing harm to feral deer will be punished according to the Cultural Assets Preservation Act. It is, however, a wonderful occasion to have close contact with wild animals in the center of such a big city.

Great Buddha of Todaiji Temple and feral deer both in Nara Park are a perfect combination to touch various dimensions of Japan. Unlike Kyoto, a neighboring prefecture, Nara is not always jammed. You can stroll around at a leisurely pace.

Nara is part of the Kansai region, which surrounds Osaka. Kansai also has many beautiful cities such as Kyoto and Kobe; all of the places are very close.

Transportation is well developed, and you can easily move to each city by public and private trains or buses.

If you want to travel to Nara to see the Great Buddha of Todaiji Temple or wild deer, you have various choices to move from Kansai International Airport (KIX).

Direct limousines will take you to Nara Station of JR / Kintetsu Line, which is very close to the Todaiji Temple. Both terminals of the airport have bus stops of the limousines, which take about 1 ½ hours to Nara. It costs 2,100 yen / US$20 (one way) but is very simple and convenient.

Trains are a little more economical. Nankai Line from the airport takes you to Nara via Osaka. In this move, you need to switch Nankai Line to Kintetsu Line at Nanba Station in Osaka, which is the final station of Nankai Line; and it costs 1,500 yen / US$15 (one way) if you don’t choose a limited express of Nankai Line.

You can also move to Nara by JR trains from the airport with similar fare. But transfer may be a little complicated because you need to stop off at Tennouji Station, unlike the Nankai Line.

The direct limousines are a little expensive but very convenient. If Nara is the first destination in your Kansai trip, choose them without hesitation.