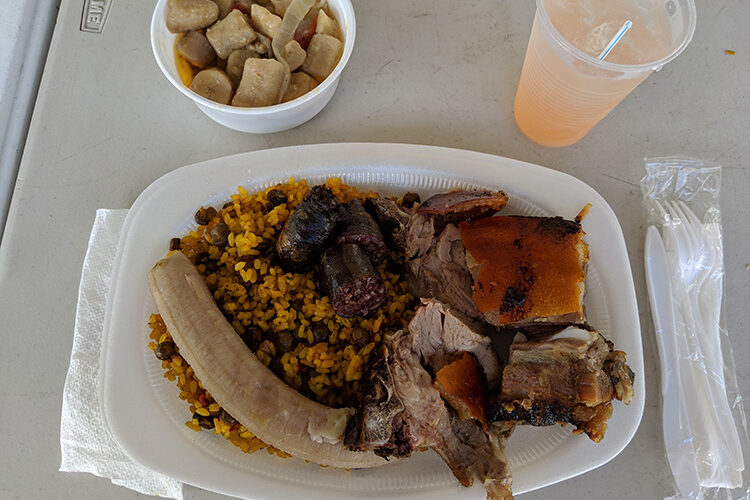 My empty stomach flopped and grumbled as I drove up the winding mountain roads in Guaynabo, Puerto Rico. Round and round and round until, finally, I came upon my lunch-time destination.

I parked in a dirt lot, got out of my car, and entered a wooden restaurant with a rickshaw corrugated metal roof. As soon as I entered, the host greeted me with a cheerful grin and said: “Do you want to see the pig?”

I was at El Rancho de Apa, a modest and casual lechonera that has received praise from the likes of Anthony Bourdain and chef José Andrés. Here, slow-roasted pig, or “lechon,” is the star of the show and Luis “Apa” Ramos is its director. El Rancho de Apa is homegrown and family-run. Apa’s father started the restaurant in 1945.

Apa learned the traditional lechon skills from his father, and he took over the restaurant in 1984. In recent years, Apa has been training his nephew to continue El Rancho de Apa’s legacy in the future.

El Rancho de Apa’s pigs are locally sourced, purchased from and raised by local farmers. This is admirable on an island that imports more than 80 percent of its food. “We give a lot of work to a lot of farmers around the island of Puerto Rico,” Rafael, the restaurant’s host, told me.

After Apa and his family pick up unprepared pigs from the local slaughterhouse, they bring them to El Rancho de Apa. Apa cooks and prepares almost all parts of the pigs in the restaurant. “We also get the pig guts, so we can use them as casing for the morcille [blood sausage],” Rafael said.

Apa is committed to roasting the pigs in the traditional Puerto Rican-style: slowly turned on spits for hours over a charcoal fire pit. The handmade roasting pit inside the restaurant is a large rectangular hole dug into the soil and surrounded by a border of concrete bricks. The pit contains natural wood charcoal and ash. “They [the company that makes the charcoal] create a teepee of wood, cover it up with land [soil], and then fire it up for three weeks,” Rafael explained. “After three weeks, it’s ready. They put the fire out and we have the charcoal.”

The roasting pit and charcoal are the reason for El Rancho de Apa’s open-air concept and rural location in the countryside. “We cannot be in a residential area because of the smoke,” Rafael said.

It takes about one hour for Apa to light the charcoal in the pit and get it hot enough for the roast. Once it is hot enough, Apa places spit-skewered pigs over the pit. Then, for five hours, he periodically and slowly turns the spit.

By 10 a.m., the restaurant is open for business and lechon is on the menu. The lechon, cut straight from the pig, is crispy and juicy. “The five-hour roast is the reason it is so crispy,” Rafael said.

Besides lechon, my plate came with rice and pigeon peas, blood sausage filled with rice, and a banana. Guineitos en Escabeche (a Puerto Rican dish with chopped unripe bananas in vinegar) was served on the side.

El Rancho de Apa also has its own homemade hot sauce, which was served to me in a large Cristal bottle. I drank a refreshing grapefruit juice and rum concoction suggested by Rafael.

I ate in a relaxed outdoor dining area that has plastic tables and a tent canopy. Jaunty music was playing out of a smiley-face speaker. I noticed that both tourists and locals were there enjoying the mid-morning lechon feast: a group of vacationing friends from the States, and a local truck driver and his son who stopped in for an early lunch during their delivery route.

My plate was eventually empty, and my stomach was full. After a contented sigh, it was time for me to drive back down the winding mountain roads. As I began to walk out of the restaurant, Apa and his nephew removed a pig from the spit. They began chopping it into pieces with a machete.

“This whole pig will be gone today,” Apa said between chops, “but we will do it again next weekend.”

El Rancho de Apa is on Highway 173 in Guaynabo, Puerto Rico, about a 30-minute drive south of the capital of San Juan. The restaurant can be hard to spot; it is marked with a small sign and is next door to a wall mural of a Puerto Rican flag. Apa’s famed lechon is available only on Saturdays and Sundays from 10 a.m. to 3 p.m. It is recommended that you arrive by noon.

Bio: Steph Liguori lives near Washington, D.C., and is passionate about traveling and eating. Read about her experiences on diaryofatravelingeatie.com.

Meeting Lord and Lady Balniel at Balcarres Estate House
Next Post: A New Wave of Tourism in Mexico: Modern and Innovative Tourism