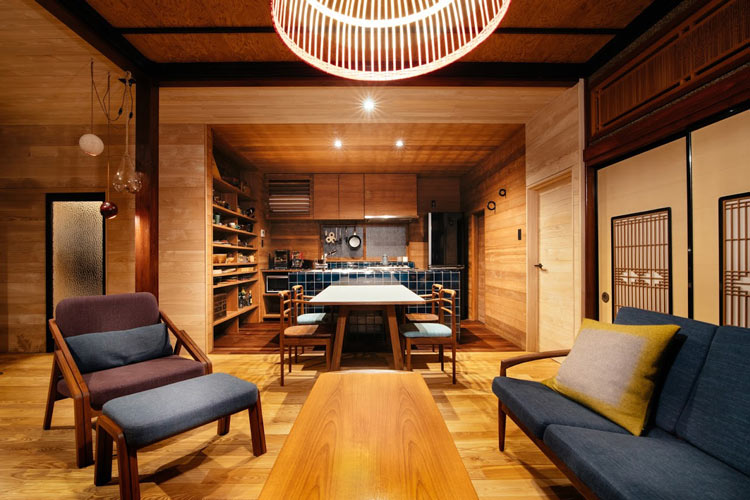 Travelers looking for the less-touristy side of Japan, which attracts more than 30 million international visitors a year, should seek out Inami, a rustic arts town in the prefecture of Toyama, the “hidden” or back side of the country’s main island, Honshu.

The town is becoming a hot destination for some sensitive tourists, especially solo travelers and small groups from Western countries, thanks to a Japanese architect couple living in Inami, who have designed and produced a series of inns, workshop studios, a restaurant, a bar and concierge lounge through renovating 100-year-old houses.

Their efforts earned a Good Design Award in 2017, one of the most recognized design awards in Japan. And one of their inns achieved Booking.com’s Guest Review Award in 2018.

The young couple, Tomotsugu Yamakawa and Satsuki Yamakawa, moved to Inami after working as architects in Shanghai. They purchased an old residence that once was the house of a Japanese door carpenter. It was too large for them and their cat, so they decided to let out empty rooms to visitors.

They renovated the house and divided residential and travelers’ space completely; they brought the BnC (bed and craft) concept to the renovated accommodation and named the BnC Tategu-ya, meaning joiner.

In the concept of BnC, any guests could become apprentices of a local craftsman. The lodgers can also purchase woodcarving work created by the in-house craftsman which is displayed in the inn. In addition, they can visit the craftsman studio near the inn to join a woodcarving workshop.

The architects also developed an app for international travelers who want to explore the town without an English-speaking guide. The app links to selected local restaurants, sightseeing spots and souvenir shops in Inami and can be used as a tool for tourists who do not speak Japanese.

The challenge achieved immense success. Travelers from Western countries started flocking to the inn to enjoy provincial life of Japan.

The Yamakawas then purchased another old house, renovated it and opened a self-catering accommodation as BnC Tae, which shares the same concept: any guest could be an apprentice of a local craftsman.

This second inn is the one that achieved Booking.com’s Guest Review Award 2018.

In May, the Yamakawas renovated another old house and set up the BnC LOUNGE. It has a check-in facility for all the BnC inns and a concierge desk. In an adjacent site, a café and bar Nomi started their business at the same time. They first opened from 8 to 11 a.m. and 7 to 11 p.m. to avoid competing against other eating establishments.

During the opening hours of Nomi, travelers can enjoy sandwiches, meat and cheese smoked with woodchips of carvings, and craft beer. The English-speaking chef from New Zealand shows off his skills and travelers enjoy chatting with him over the open kitchen counter.

April and August are the high seasons, and the occupancy of the BnC inns runs to almost 100 percent; May and June are the quiet seasons.

BnC Tomoe is the Latest Renovation

Visitors now have another choice of where to stay, with the recent opening of a new collaborative inn, BnC Tomoe. The Yamakawas renovated a historic two-story building, which previously was a high-class Japanese-style restaurant. The ex-restaurant, which has a Japanese-style garden, is large and the Yamakawas divided it into three different rooms for three different guests within one building.

Enjoy staying at a BnC inn, having meals at the café and bar, and viewing Inami, the snowy art town in “hidden” Japan.

If You Visit Inami, Japan

To reach Inami, a 2 ½-hour ride of bullet trains from Tokyo Station will bring you to Shin-takaoka Station, which is the nearest bullet train station. From Shin-takaoka Station, you can take a local bus directly to Inami or switch to a local train called JR Jouhana Line. If you prefer the train, you need to get off at JR Fukuno Station and take a taxi or a bus to Inami.

From Osaka, limited express Thunder Bird will take you to JR Kanazawa Station, which is located across the mountains from Inami. Kanazawa Station has a stop for a local bus to Inami; however, it doesn’t run frequently. The tramontane bus is more convenient.

If Nagoya is your departing spot, highway buses to JR Tonami Station are convenient and economical. After arriving at Tonami in Toyama Prefecture, you can ride a local train JR Johana Line and move to JR Fukuno Station. From the station, you can take a taxi or a local bus to Inami, as mentioned above.

Author Bio: Masayoshi Sakamoto（坂本正敬）is a Japanese writer and translator based in Toyama, Japan. He writes news and columns for a number of publications and web magazines. He’s also in preparation for contributing to a new local magazine, HokuRoku as the editor-in-chief.

Flight Delays Are No Worries with the Right Travel Insurance
Next Post: A Monumental Experience – Summiting the Washington Monument