Two statues transformed a skeptic into a believer, encouraged a lukewarm Lutheran into a wanna-be Catholic and turned a ho-hum transatlantic crossing into a pilgrimage.

Seeing one of these monuments at the beginning of the journey and a replica at the end of the passage filled me with faith when I had almost given up on the world. It gave the voyage bookends of redemption.

Travel experiences like watching the sunrise over Machu Picchu, hearing the roar of cascades at Iguassu Falls, and experiencing the white blindness from trekking across glaciers in the Chilean Fiords, have left me searching for words of wonderment. But spectacles that have caught me off guard, ones that sneak up like a rolling fog, have shaken me with a deeper jolt.

That’s what happening on a recent 17-day Portuguese adventure on an ocean voyage originating in Rio de Janeiro and culminating in Lisbon.

The only hope of excitement on the 10-hour overnight flight from Houston to Rio was the plane descending into this South American city at dawn. We hoped to see the rising sun over Christ the Redeemer statue atop Corcovado Mountain, nicknamed The Hunchback.

Catching a glimpse of this Rio de Janeiro icon was the only reason I agreed to take the prisoner’s seat, the window. I researched facts of the monument during the restless night flight. When the captain announced our approach to Rio de Janeiro- Galeão International Airport, located a short distance from Corcovado, I searched the skies between intermittent clouds.

Then, I spotted Christ the Redeemer. Arms of Christ outstretched to a 92-foot span, with hands that seemed to welcome, peeked through the white veil. Clouds lifted on our descent, and the entire 98-foot figure atop a huge base appeared.

Christ’s face revealed an expression of peace and his flowing robes gave a sense of flexible tolerance. I’m not a devout person, but I felt compelled to pray for my family, for every friend who is sick or in trouble, for the world to stop its craziness.

I had seen this statue often on TV during the XXXI Olympiad, in magazines and on travel logs, but with my own eyes…no words, just thoughts of salvation.

For our entire time in Rio, I felt the protection of this symbol of redemption, proclaimed in 2007 as one of the ‘new’ Seven Wonders of the World. Looking down on every living thing, this Guardian imparted a sense of forgiveness.  In 1920, the city’s Catholic community felt the need for an image to counteract the increasing godlessness being witnessed. I pondered that almost 100 years later the feeling that nothing is sacred anymore prevails with even greater intensity. 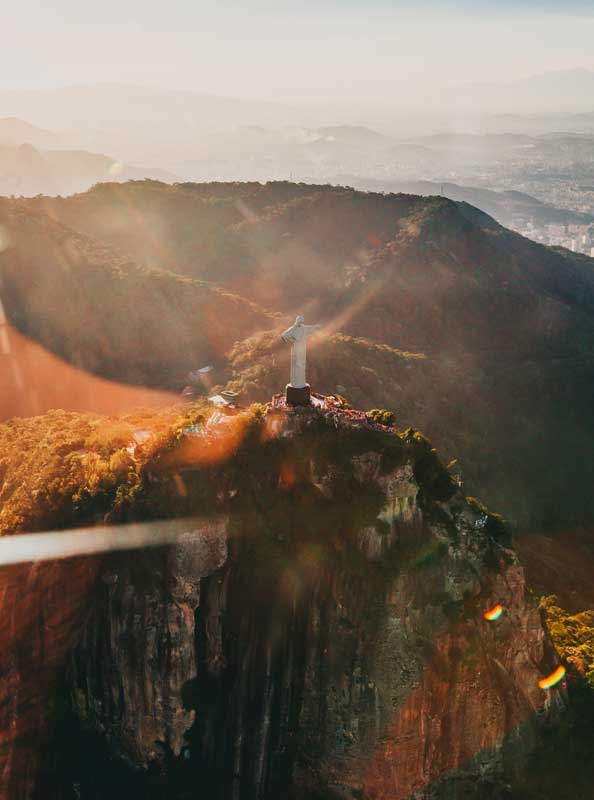 How Cristo Redentor  Was Made

An appointed council selected Portuguese engineer Hector da Silva Costa as the designer of Cristo Redentor. The creator abandoned his original plan of Christ carrying a cross in one hand and a globe in the other in favor of the art deco depiction of Christ with outstretched arms.

Da Silva Costa traveled to France and chose world class French-Polish sculptor, Paul Landowska, who formed the entire statue in clay pieces and shipped them to Rio. The process to remake each section of reinforced concrete took nine years.

Wanting to soften the outer appearance of the statue, Da Silva ordered 6 million hand-crafted soapstone tiles to completely cover Christ the Redeemer. Workers reportedly wrote messages on the backs of the tiles, giving the monument personal connections to the Cariocas, the residents of Rio.

We took the train up Corcovado Mountain and learned that a system of escalators and elevators installed in 2003 had replaced the previous arduous climb of 200 steps to the base.

Ninety years of weather beatings and lightning strikes have taken their toll on these protective coverings, with a most violent direct strike in 2014 that singed the back of the statue’s head and zapped off the tip of one finger. A complete renovation is scheduled for 2020 to acknowledge one century since the initial concept of the monument.

Although looming above me to its 125 foot height with a base that now houses a chapel, this close proximity to the statue left me empty of the feelings of deliverance and sanctity that I had experienced seeing it from afar.

After we boarded the Azamara Pursuit and sailed from Rio, I watched Christ the Redeemer diminish in size, but the unexpected impact of its hidden strength of faith and my unexplained impulse to pray will never fade from my memory.

After making ports of call in Brazil, in Salvador de Bahia, Recife and Olinda, the journey of four reflective days at sea crossing the Atlantic left me transfixed.

Stopping at the historic slave trader’s island, Cape Verde off the coast of Senegal and then onto Agadir and Casablanca, Morocco on Africa’s mainland, I realized that in the span of 17 days, we had set foot on three continents.

Two more days at sea and we would land on the fourth, Europe, in one expedition. We left the turbulent waters of the Atlantic and turned into the smooth, shimmering estuary, the Tagus River toward our destination of Lisbon, Portugal. 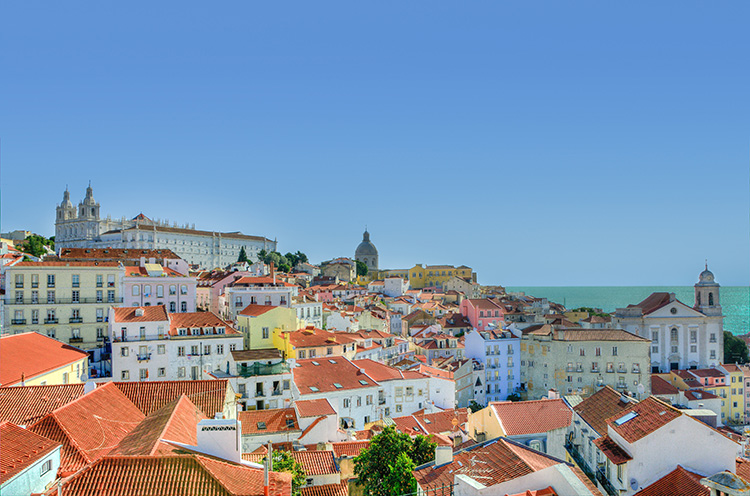 I had traveled up this waterway several times before, but it was not until we reached the April 25th Bridge and I caught sight of the other ‘bookend’ of this voyage, that its impact of the connection resonated. There on the high bluffs above the slow flowing waters of the Tagus, overlooking the capital of Portugal stood its most iconic monument, Christ the King. 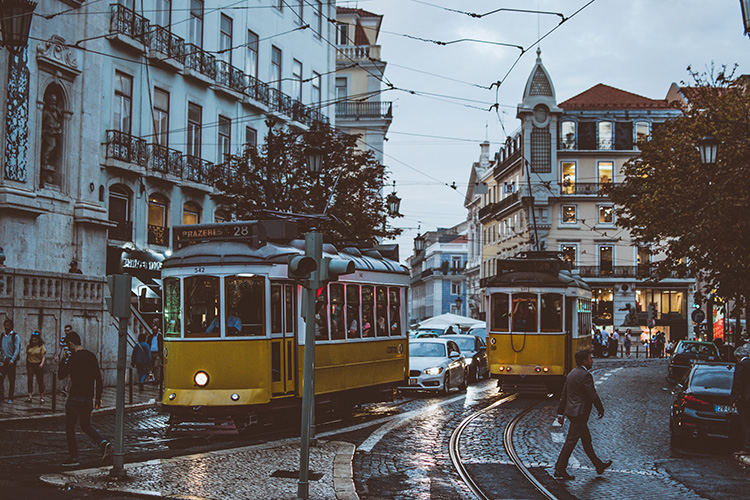 In 1941, the citizens of Lisbon decided to build the statue as a sign of gratefulness to God that Portugal had not been drawn into WWII.  Cardinal Patriarch of Lisbon traveled to Brazil to assess the Redeemer statue. Created by the same sculptor as Rio’s Christ, Paul Landowska patterned the 92 foot high replica, Cristo Rei with similar outstretched arms. After the land in Alamada, across the Tagus was procured, construction of the statue took from 1949 to 1959 to complete.

I felt a similar inspirational tug as I stared at this copy from the Pursuit’s upper deck and then again once we docked in Lisbon. The impact of traveling from “Christ to Christ,” from South America to Europe, from godlessness to gratefulness, from Redeemer to King left me with a profound awareness of the span of this journey.

The effects of monuments throughout the world on those privileged to experience them leave indelible marks. For immigrant or US citizen, the thrill of the first sighting of the Statue of Liberty invokes a sense of nationalism, hopeful anticipation, and pride.

For me, seeing Christ the Redeemer and Christ the King back to back aroused a spiritual experience within my soul that exploring many Catholic cathedrals in the world hasn’t stirred. Two similar icons, continents apart connect two Portuguese countries, reflect the faith of their people and signify a link joining them across the vast Atlantic.

These ‘Bookends of Redemption’ will remain with me forever as the unforeseen spectacle of this transatlantic crossing.

Author’s Bio: After a life-long profession of treating the mentally ill at a PA psychiatric hospital for 33 years and also serving as its Director of Admissions, Carol L. Bowman retired to Lake Chapala, Mexico in 2006 with her husband, to pursue more positive passions. Her family thought that she, too, had ‘gone mad.’ She’s been teaching English to Mexican adults for ten years, in a program operated by volunteer expatriates and writing for local on-line and print publications. Using her adventures experienced during visits to over 80 countries to capture a niche in travel writing, Carol also dabbles in ‘memoir.’  A frequent contributor to Lake Chapala English magazine, “El Ojo del Lago,” she’s won several literary awards from that publication, including Best Feature in 2010 and Best Fiction in 2014. She also netted a story regarding her psychiatric field work in the published anthology, “Tales from the Couch.”