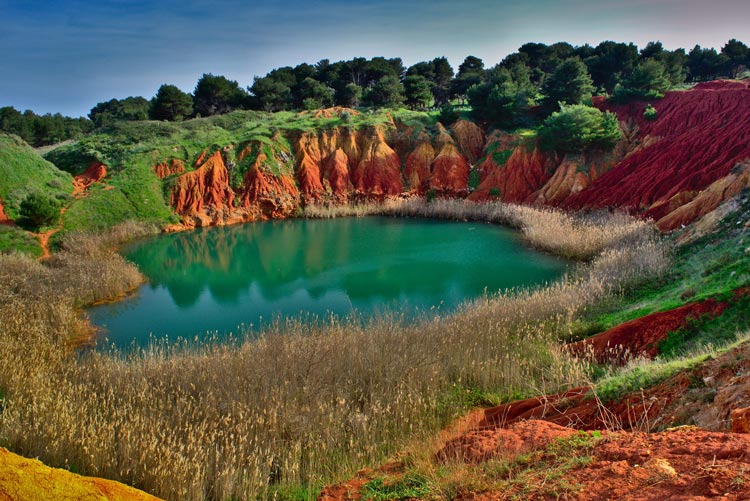 It’s strange to be a tourist in your homeland, but it recently happened to me and turned out to be one of the most beautiful experiences around the world.

After some 10 years spent very far from home (I have studied and currently work 800 km or 497 miles away), I have decided to visit Salento, Italy to see my family, and to re-encounter my homeland and discover something new.

A Visit to Salento, Italy

Salento is a wide region in the south of Italy, embracing the province of Lecce and, recently, also Brindisi and Taranto, for a total of a third of the region called Puglia.

This peninsula is also known as the heel of Italy and is surrounded by the Adriatic and Ionian seas that shape a wide set of different breathtaking landscapes.

Tourists visiting Salento are usually attracted by the sea as well as the beautiful baroque administrative center, Lecce. The closest location to reach the sea is San Cataldo.

This old town, so prosperous in the 1960s, is now just snubbed by most of the locals, despite the beautiful beaches and the clear water where, when I was a child, my father used to bring me to go fishing.

From San Cataldo, we will start our path on the coastal road SP366, going south. Just outside San Cataldo is the natural reserve of Cesine, a reclaimed swampland with typical flora and fauna species. SP366 runs along Cesine and it’s so fascinating to be surrounded by pines and the olive trees that represent this territory.

The first town after Cesine is Torre Specchia, a favorite for surfers because of the strong exposure to the wind.

Here you can enjoy the sun on a small but welcoming beach, where bars and kiosks are always ready to support you and offer one of Salento’s typical summer dishes – frisa, kind of a toasted bread covered by fresh tomatoes, which is very refreshing on hot August days and so different from the cooking traditions in the north of Italy.

Continuing our journey south, we easily get to San Foca. Clear waters and silvery sands are the main characteristics of the minuscule coves scattered on the north side of San Foca.

A large irregular square hosting bars, restaurants, hotels and, occasionally, a market acts as a bridge between the big harbor and the center of this little town where some historical shops proudly endure.

In San Foca, it is also possible to rent a boat to easily reach some of the beautiful coves not accessible by foot (located mostly in Roca and Torre dell’Orso).

Cave of the Poetry

Roca is just 2 minutes away from San Foca and boasts one of the most appreciated natural beauties of Salento: grotta della poesia, which can be translated as cave of the poetry.

This wide crack in the rocks embraces an emerald stretch of water, where numerous boys and girls bravely dive. Even being prudent, you can swim into this wonderful cave, thanks to the stairs carved into the rocks.

Roca is (probably) the place where Aeneas landed in Virgil’s Aeneid, and in the beginning of the 15th century was also a pirate harbor. Today you can still walk in the remains of the ancient Roman city.

Just a few feet divide Roca and Torre dell’Orso. When you reach Torre dell’Orso you are immediately caught by a breathtaking sight: a very large beach embraced by a pine grove and rocks. But the best is yet to come.

Park your car or bike close to Dentoni, Torre dell’Orso’s historic patisserie, and have a classic caffè in ghiaccio con latte di mandorla (iced coffee with almond syrup) and a warm pasticciotto (the typical dessert made by a shortcrust shell stuffed with custard). Take a breath and get ready to explore this beautiful coast.

Right in front of the bakery you can easily access the beach with its golden sand and an amazingly clear water (awarded again and again with the European Blue Flag, signifying high quality standards).

Leaving behind the tower, walk on the shore to get to the opposite side of the bay. You will soon notice two stacks known as due sorelle (the two sisters), the symbol of Torre dell’Orso. The two sisters are a perfect destination for a short canoe trip (in summer you can rent one for cheap) or a swim.

But the best sight of these iconic stacks is from the top. Find the trail that climbs up on the cliffs, and be prepared to be amazed. The two sisters are also one of the best places to admire the sunrise over the Adriatic sea.

If you plan to spend the evening in Torre dell’Orso, you should visit the park Giardini del sole, where rides, bars, restaurants and a warm and merry atmosphere will color your stay.

If a wonderful sea is not enough, get prepared for a huge dive into history at Otranto. I’ve always loved this town for the inspiring atmosphere dense with history and mystery that you can breathe in its tight and steep roads.

Enter the old town from Porta Alfonsina (the Alfonsina gate), then enjoy the little artisan shops and the beautiful sights that many of the streets offer.

The Castle of Otranto

Don’t miss the bastions that dominate Otranto’s bay. The ancient Aragonese castle hosting the old town has also been the scene of the first gothic novel, “The Castle of Otranto” by Horace Walpole. Also not to be missed is Otranto’s cathedral, adorned by an enormous mosaic representing the tree of life.

The evocative crypt is a testimony of the ancient Byzantine era. But this church is also the place where the 800 victims of the well-known bloody Turkish invasion (15th century) rest in peace. These are just a few pills of one of the most stunning Italian coastal towns.

Just outside Otranto are two of the most suggestive places in Salento: the Bauxite quarry and Punta Palascia.

The first is (of course) a quarry that was used to extract bauxite (a rock used to produce aluminium) that was abandoned in the 1970s. In the last decades it has been filled by rain, so today the green water and the red rocks create a surreal atmosphere with bright colors.

Punta Palascia, Italy’s easternmost territory, at first sight looks desolate, but don’t be cheated by what you see from the road.

Park your car close to the military zone and walk the trail down the cliffs until you see the iconic lighthouse. Your senses will be fully caught by the smell of the many natural plants growing on those rocks: sage, oregano and myrtle are just a few.

So, this is the end of our trip – 60 km (37 miles) in the astonishing Salento, immersed in nature, history and good food. It’s something that I discovered or re-discovered years after my moving to the north of Italy.

Now I take advantage of every long weekend to breathe this warm atmosphere. And, at the end of the trip, every friend I bring here is sad to leave.

Author Bio: Fabio Viola, who holds a doctorate in computer science and engineering from the University of Bologna, is a freelance photographer and computer graphics artist. He loves traveling, especially with motorbikes and boats, through unconventional places, always willing to discover something new. In his free time he enjoys experimenting with traditional recipes discovered from around the world.

The Essence of India’s Latin Quarter, Fontainhas in Goa
Next Post: Swimming with Jellyfish in Palau, Micronesia