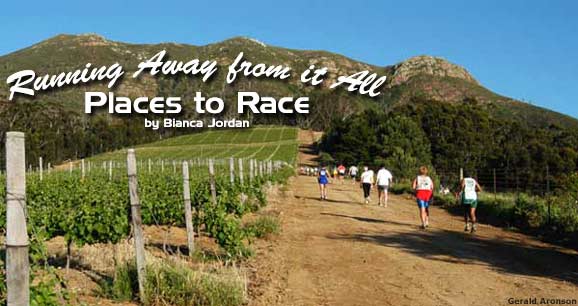 The day after flying into Rome, I woke up at 7 a.m., took a cab to the stadium at the Baths of Caracalla, and ran in the Roma Urbs Mundi 10K race. I was probably the only foreigner running, but no one could tell; Romans and tourists cheered when I passed the coliseum.

A few minutes later, I glanced up from the irregular cobblestone sidewalk and realized I was passing “the typewriter,” the monument erected in memory of Victor Emmanuel II, the first king of unified Italy. Toward the end, another woman and I exchanged looks as we approached one of Rome’s seven hills, basically saying, “this is going to be hard.”

Finally, after crossing the finish line, I returned to the stadium steps to rest. A runner’s young son saw I had no water, and timidly offered me his cold bottle of frizzante. The gesture was completely unexpected, and I felt a sense of accomplishment.

The event took only one morning out of my weeklong vacation, but it let me tour Rome in a way that out-of-towners usually don’t. Running in a locally organized race allowed me to feel like a resident, even though I don’t speak Italian. I simply needed to wake up early and don my sneakers.

Other travelers and running enthusiasts throughout the world are doing the same. Last year, more than 87,000 people worldwide applied to the New York City Marathon alone. Visit Websites such as www.active.com, www.RunnersWorld.com and www.RunThePlanet.com, and you’ll find links to races held in almost every nook and cranny of the world, even Antarctica.

More and more, runners travel in order to run, and tourists run in order to travel. Below is a roundup of five races held on five continents, rated by difficulty. Run one of these, and you’ll get a glimpse into the local life of your travel destination.

Last year, Hong Kong threw its first Harbour Day festival to celebrate Victoria Harbor, one of the world’s busiest and most admired ports. This November, 300 to 400 runners are expected to run in the races, which are held on the Oriental Golf City golf course and driving range. Oriental Golf City is situated on the Kowloon Peninsula where the old Kai Tak airport runway was once located.

The course looks out onto rugged mountains, the harbor waters and Hong Kong Island’s towering skyline. Not only is the course flat and relatively easy, but November is when temperatures, humidity, pollution levels and hotel rates drop, and plant life, such as the Hong Kong orchid tree (which appears on Hong Kong’s flag and coins), comes into bloom.

This year, there will be music to psych runners up at the start and end of the races, and registrants will receive free T-shirts, food and other giveaways. The festival also includes sailing, rowing, windsurfing, golfing and rugby events. For more information, visit www.harbourday.hk. Photos: www.revolution-asia.com.

Even if you walk in this race, which is popular with families, you’ll fit in perfectly with this city of pedestrians. Held in April, when temperatures reach a very pleasant 60 or 70° F (15-21° C), the race takes participants through Manhattan’s Central Park.

It starts at Bethesda Terrace, where the famous Angel of the Waters fountain overlooks Central Park’s lake, and continues past John Lennon’s beloved Strawberry Fields, the Metropolitan Museum of Art’s Egyptian wing, down Cat Hill (try spotting the predator cat sculpture on your way down) and, finally, back to the Bethesda Terrace.

Runners receive loads of post-race goodies, thanks to the New York Road Runner’s Club, which organizes the event in partnership with Niketown and the City Parks Foundation. Look forward to music and free T-shirts, water, bagels, bananas and apples.

Don’t fill up on the bagels, though, because the race ends only a few city blocks away from the Tavern on the Green and many other renowned restaurants in and around Columbus Circle. For more information, visit www.nyrr.org and click on “Run for the Parks.” Photos: www.nyrrc.org/race/2005/photos.

This year’s race will be held October 15, a great time to visit Italy. The weather is mild and kind on visitors, with highs typically reaching the 60s (15° C) and autumn colors covering central Italy’s mountains, farmland and seaside towns. Best of all, the tourist high season nears its end in October, meaning that travelers don’t have to compete for hotel space or wait in long lines at tourist attractions, as they would in the summer.

The event begins at the Baths of Caracalla stadium, where 3rd century Romans used to socialize and relax, and then winds around the edge of the Imperial Forum, Michelangelo’s Campidoglio, the Coliseum and the San Saba Church, where Antipope Constantine II was imprisoned in the 700s.

While the first half of the race is on fairly flat terrain, beware: The second half is mostly hills. After the race, registrants receive water and food such as croissants and yogurt. Alternatively, you can do as the Romans do and drink straight from the city’s public spigots. For more information, visit www.romaurbsmundi.it. Photos: www.romaurbsmundi.it.

Even runners party hard in festive Brazil. Head to São Paulo on New Year’s and race against 15,000 fun-loving, pumped-up runners. While professional, elite athletes from as far away as Kenya, Korea, and Serbia and Montenegro compete in this highly prestigious race, many everyday Brazilians and runners from other countries line up for the celebration as well.

Regarded as one of Latin America’s major athletic events, the race occurs every year on Saint Silvestre’s Day, named in honor of a saint who was pope between the years 314 and 335. The first race took place in 1924 after Brazilian media mogul Cásper Líbero organized the event to promote his new sports newspaper.

The tradition continues today with many running in sequined costumes, colorful wigs, superhero capes, bells or anything else they can think of. Meanwhile, crowds cheer on athletes with applause, hoots, hollers and, occasionally, fireworks. While the mood may be easy-going, the course is difficult.

Normally, only vineyard owners meander along the roads making up Cape Town’s Grape Run. Each year at the end of October, however, the Varsity Old Boys Running Club and the Constantia Valley’s wineries welcome runners onto estates famed for their atmospheric beauty, centuries-old Dutch heritage, complicated slave histories and, of course, their world-famous wines.

The sites — which include Groot Constantia, Klein Constantia, Buitenverwachting and Constantia Uitsig’s properties — are stunning, but there’s a price: The race is hard. For instance, in order to watch the sun rise over the sienna-colored dirt roads and the jagged green hills that wind through and around the valley’s farmland, runners have to cross the start line at 6:30 a.m.

The course is hilly, long, and can get warm after 13 miles of running, although typically no warmer than 70° F (21° C). Last year, approximately 1,000 athletes of all ages participated, and registrants received free wine glasses. For more information, visit www.vob.co.za. Photos: www.runnersworld.co.za.

Dutch Treat: Rembrandt at 400
Next Post: Nicaragua Revisited: A Decade of Change