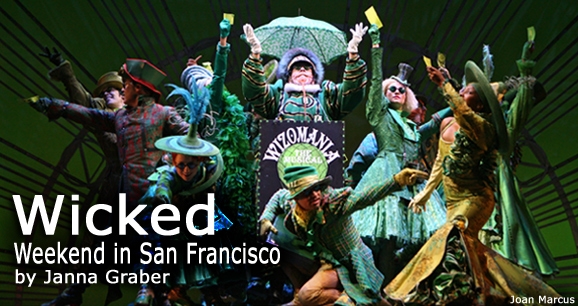 Combine a world-class city with some of America’s top stage productions, and you get an irresistible destination for theater lovers.

No, I’m not talking New York City here, but California’s City by the Bay. The arts have always been an important part of life in San Francisco. Theater companies big and small have been delighting audiences here since the Gold Rush days.

But you don’t have to be a local to enjoy the arts. San Francisco is the perfect spot for a long weekend getaway. And this year, there’s an additional reason to make a weekend escape to this northern California city – to see the international smash hit “Wicked.”

The homecoming is sweet for locals who saw the production’s premier at the Curran Theatre back in 2003. Since then, “Wicked” has gone on to become a worldwide theatrical phenomenon, and has been seen by some 16 million people.

Based on the novel by Gregory Maguire, “Wicked” is the story of the witches of Oz before they ever got involved with Dorothy and her dog, Toto. Young Glinda is an ambitious and popular student when she meets the introspective and misunderstood Elphaba at school.

At first repulsed by Elphaba’s strange looks, Glinda grows to appreciate her unlikely friend. The pair’s remarkable odyssey provides insight into how each girl meets her destiny to become the well-known witches of Oz.

Filled with imaginative costumes, powerful music and a compelling storyline, the musical keeps viewers on their seats. The story touches on human emotions that all can relate to – from falling in love and the pain of rejection to the bravery it takes to stand up to wrongdoing.

The production is playing at the Orpheum Theatre, a historical landmark, which was built in 1926. Looking much more like a 12th-century Spanish palace than a popular theater venue, the Orpheum has featured everything from vaudeville and silent films to motion pictures and popular musicals.

There are plenty of places to stay during your weekend getaway. One recommendation is the ‘green-from-the-inside-out’ Orchard Garden Hotel, San Francisco’s only LEED (Leadership in Energy and Environmental Design) certified hotel.

This boutique property is centrally located just a few minutes’ walk from Chinatown. The hotel’s “Wicked Green” overnight package includes a deluxe guest room, “Wicked” CD soundtrack, a  complimentary breakfast and a turndown sweet from the Sugar Bowl Bakery for $179 based on double occupancy. The price does not include theater tickets.

Another property with a superb location is the newly renovated Hyatt Fisherman’s Wharf. The 313-room hotel is just across the street from the Mason/Powell Cable Car line, and within walking distance of Fisherman’s Wharf and many nearby attractions.

San Francisco’s most popular attraction is the Pier 39. This bayside marketplace along the wharf is admittedly a bit touristy, but for good reason. It’s home to more than 100 stores, a dozen seaside restaurants and the city’s beloved sea lion colony. (You can see the seals via webcam at www.pier39.com.)

For many, Fisherman’s Wharf is synonymous with great seafood. You’ll find a wide range of restaurants, from street vendors selling steaming clam chowder served in sourdough bowls to fine restaurants offering romantic views of the harbor.

Wherever you go, be sure to try the Dungeness crab, a popular local dish. This sweet-tasting crustacean is harvested in the cold Pacific waters near San Francisco, so it’s guaranteed to be fresh.

After that, stop by Boudin Bakery to sample another local favorite – the Original San Francisco Sour Dough Bread. You can watch the bakers as they craft their masterpieces or browse the museum, which covers 150 years of company history.

Chocolate lovers will want to follow their noses up the hill to Ghirardelli Square. It was here in San Francisco that the world-famous chocolate got its start in 1852. Today, you can sample it for yourself at the Original Ghirardelli Ice Cream and Chocolate Manufactory.

Another American icon was invented in San Francisco — the cable car. In the early days, San Francisco’s steep hills were difficult for horse and buggies to manage. After British immigrant Andrew Hallidie witnessed a horrific horse and buggy accident in 1873, he decided to try something new. The result of his efforts is the cable car system that still transports riders throughout the city today.

You can learn more about this unique transportation system at the free San Francisco Cable Car Museum. And after you’ve walked up some of San Francisco’s steep hills, you’ll have a new love for these slow, but effective cars. A day pass to ride the cable cars is only $11 – and well worth it!

Your San Francisco experience wouldn’t be complete without a visit to Alcatraz Island. Located in the middle of San Francisco Bay, this tiny piece of land was home to the first lighthouse and U.S. fort on the western coast before it became an infamous federal penitentiary.

Today, ferries transport guests to visit the historic site, which is operated by the National Park Service. Audio tours offer insight into life in those long-gone days, as well as the history of some of the prison’s most-hardened prisoners.

A weekend just isn’t enough to sample all that San Francisco has to offer. But it will give you a pretty good taste of this beloved American city, and it will make you want to come back for more.