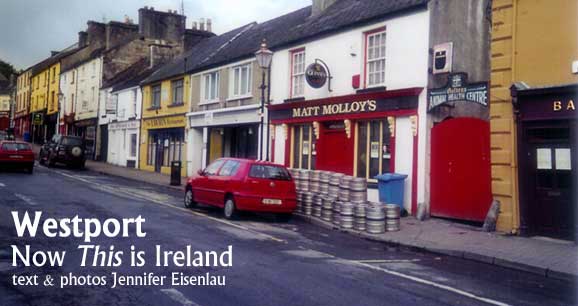 I stretched out under my yellow duvet. A scented breeze off the sea blew the curtains in and out, in and out. Bacon sizzled downstairs. An Irish voice somewhere below in the yard spoke, “Ah, no. Lord, love yeh. Not a’ tall, not a’ tall,

”Was I dreaming? No, I was in Westport, Ireland.

I have been traveling to Ireland for more than 10 years, as a tour guide and teacher. Westport, a designated heritage town situated between the cities of Galway and Sligo on the west coast, is my favorite town in all of Ireland.

Upon landing in Shannon, I drove northwest 100 miles (160 km) to Westport. I was restless from sitting in the car, and decided to take a nice long walk to an old pub. I could have driven to the pub, sure, but I would have missed the fresh sea air, the tang of the newly cut hay and the exercise. As my Uncle Jim, a resident of Limerick, likes to say, I stretched the ol’ legs a bit.

I started at Westport’s heart, a shady boulevard along the Carrowbeg River called “The Mall.” Turning onto James Street, I headed toward the Octagon Monument, in the center of the round-about at the base of Tober Hill. The monument is a statue of Mayo County’s most sacred visitor, St. Patrick.

Rounding the monument, I made my way up the steep, three-block incline of Tober Hill. At the crest, I paused for a few deep gulps of sea air and the view took my breath away: sea, green fields and stone walls ahead of me, the town behind me.

From the hilltop, the path winds down to the ocean through fields, past horse pastures, and behind houses. I paused to rub a horse’s nose, smelled a few late-blooming lilacs and sighed over the graffiti left by school kids on sheds. The path was dense with green leaves and bees, the air rich with the moist scent of growing things. A tractor putted along just behind the hedge, a hedge so dense I could not see the machine itself.

Twenty minutes later I popped out at the waterfront, and walked Quay Road to The Towers. The pub is a “James Joyce Pub Award” prizewinner, lauded for its sense of Joycean tradition. The Towers serves up a delicious fish-bake pie.

Now, if you know your Ulysses, I should have ordered the gorgonzola sandwich and red wine, the choice of the protagonist in the great novel. Each year the novel is celebrated in Dublin as thousands eat this meal — but really, who wants a cheese sandwich when there’s hot, savory pie?

After dinner, I journeyed out for a few pints at Matt Molloy’s Bar, on Bridge Street. The pub is named for and operated by Matt Molloy, flutist with the Chieftains. Playing together since the 1960s, this band has shaped today’s Celtic music. I have been told that if I am lucky, Molloy, himself, might even play.

It’s been known to happen. I have not been so fortunate. However, I will persevere, and I make plans to return to the pub each time I visit Westport. A pub crawl in this town is a fine thing — like Galway used to be, before it was “discovered” by the partying hordes.

Another lovely benefit to a Westport visit is the proximity of Clare Island (population 143). The next day, a 30-minute drive west of town brought me to the Roonagh Quay. The passenger ferry, the Pirate Queen, is named for Grace O’Malley (in Irish, Granuaile), Clare Island’s most famous former inhabitant.

There are miles of inviting roads to walk on the island, all with views of rugged hills and sheep-filled fields. The main “town” of Clare is near Grace O’Malley’s castle ruins, near the harbor. There are a few B&Bs, a shop and a pub. While there’s not much to buy or eat, there is so much to see. I hiked the flat gravel roads with clear views of sea and sky.

Birds of all descriptions flew overhead. An occasional car drove by, and when it did, I waved. People waved back. Tiny wildflowers grew in the cracks of the stone walls that were laid out in the times of my chieftain hero. Clare Island is beautiful, but it is a hard place. Even on a lovely late spring day, I felt the sting of the winter in the winds that blew steadily off the ocean.

I had lunch at the Bay View Hotel, owned and operated by the same family who runs the ferry. Then I sat back and enjoyed a pint — poured by the boat’s captain — before I caught the ferry back to the mainland.

Later that evening, driving back toward Westport, I kept my eyes open for the lone speed bump on the main road. The hump is the center of Murrisk, a village at the foot of Croagh Patrick mountain.

Here I sought out The Tavern Bar and Restaurant. Recommended by the Irish Fisheries Board (and the ferry captain), the Tavern offered seafood pulled from the water in the morning and served to the restaurant’s patrons in the evening.

For my dinner, I started with a brothy seafood chowder, followed by an appetizer of local Clew Bay mussels, and then poached prawns. All was delicious, but not all was eaten. In Ireland, portions are enormous. My Auntie Jane, Jim’s wife, claims that all Irish mothers overfeed their children because our ancestors went hungry. I felt a bit ashamed wasting food as I did, knowing that I was in County Mayo, one of the hardest-hit counties of the 19th century famine.

The following morning was Sunday. Most of Ireland still is Catholic, so when in Rome … do as the Roman Catholics do. I did; I attended mass at St. Mary’s Church, located on the Mall.

In the afternoon, I drove five miles (8 km) along the coast road back to Croagh Patrick. There, I pulled into a car park at the base of a popular path leading to a statue of St. Patrick, overlooking Clew Bay. Legend has it that in the 5th century this holy man chased the snakes from Eire, but science tells us that serpents never crawled in Ireland.

While the trail leading to the statue is short, I planned to go beyond the statue and climb the peak. I suited up with the proper gear (boots, poncho, fleece, food, water, hat, mittens) and climbed to the top of the 2,510-foot cone (765 m), where there’s a small chapel. Many pilgrims do this climb, stopping and praying along the way at shrines dedicated to St. Patrick.

When he was a younger man, my Uncle Jim climbed every summer with thousands of others. They would hike the shale-strewn path in bare feet as an act of penance. My uncle believes that his last hike, a good three-hour trek, is the reason his son cleaned up his act. Uncle Jim is not alone in his faith; in all seasons the faithful — mainly older, but still a number of young Catholics — pray as they hike up the slippery slope.

I’ve climbed this path a number of times before. Once, when I was climbing in December, a sudden fog came down onto the trail, and from out of the mist, a figure appeared. I thought I was witnessing a miracle, until I saw the green rubber boots. A local farmer in his wellies was looking for his sheep. His only words to me were, “You’d best leave the mountain. We’ve weather coming in.”

Back at the car park, I crossed the road to The Coffin Ship, the country’s largest bronze sculpture — about one-quarter the scale of a real ship — crafted by artist John Behan as a famine memorial. It recalls the horror of the Great Hunger that decimated Ireland in the 1840s.

Metal skeletons intertwine to form a ship that sits upon a hill, overlooking the bay from which thousands of destitute souls sailed for America, Australia and Canada. Gazing at the sculpture, I was moved deeply. I could not help but think of the desperation felt by those who left this lovely place in ships so unseaworthy they were called “coffin” ships. Did any of my ancestors sail on these ships?

Somberly, I drove back to my holiday apartment, rented for 10 days. That night I snuggled under my yellow duvet, exhausted, but thankful for a place like Westport.

Aer Lingus is Ireland’s national airline. It will put you in the right mind set: Guinness is served, and you will be greeted upon arrival into Shannon with a Gaelic “Céad mile fáilte (a 100,000 welcomes).”

Jordan: Exploring Amman in a Day
Next Post: The New Dublin: Party Central