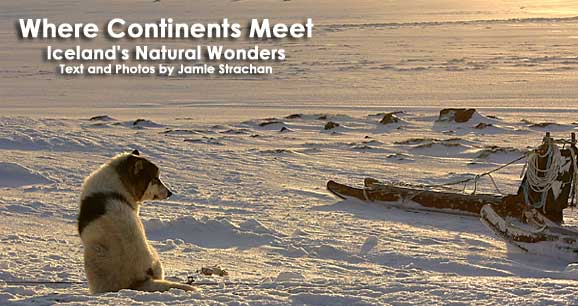 I’m told that when inclement weather looms in Iceland, all you need to do is wait five minutes and it will probably get worse. The weather here has always had a ubiquitous reputation for five seasons in one day.

It’s 9 a.m. and I’m clambering, caffeine deprived, aboard the large four-wheel-drive swamping the footpath outside my guesthouse and bracing for an arctic-style assault on my extremities. Thermals? Check. GPS distress beacon? Check.

Rakki, my guide, extends a wiry hand, pulling his cap low until it almost covers his eyebrows. “You’re the only one today,” he says, promising to return me by dusk with the full complement of fingers and toes I’m starting with. It’s a good start.

As we make our way northeast from Reykjavik, Iceland’s burgeoning capital and the hippest new scene for the UK party crowd — being a mere three-hour hop from London — the city limits fade from view. We are driving to Thingvellir National Park, in Iceland’s Golden Circle region.

Over the rumbling hum of our sizeable wheels, I ask Rakki why, for such a small city, there are so many cars. “It’s simple,” he says, “Icelanders love their independence. If you have a car, it’s a sign that you’re someone and going places.”

Thingvellir, a natural amphitheater approximately 14 miles (23 k) from Reykjavik, was home to the country’s parliament, which met annually, beginning in A.D. 930.

While most of Europe at the time was struggling through feudalism, chieftains — including descendants of Iceland’s first settler, Norwegian Viking chieftain Ingólfur Arnarson, who arrived in 870 — debated the issues that confronted the country for hundreds of years at Thingvellir, until 1798.

In the year 2000, some 30,000 Icelanders turned out at Thingvellir to celebrate 1,000 years of Christianity. They probably all drove. In 2004, UNESCO added the park to its World Heritage list, citing Thingvellir as a place of great historical importance to its people.

I set off on foot following a trail down to the plain below, where the great rift between the North American and the Eurasian tectonic plates appears to carve the landscape in two with dramatic effect. A stinging wind whips at my face until my eyes fill with tears. The only sounds are the crunching of snow beneath my boots — and the faint sound of the plates moving ever so slowly apart.

The giant plates move approximately 1 millimeter a year, and in doing so have left a series of dramatic fissures in the earth, the biggest of them the great divide at Almannagjá, a canyon that snakes its way down into Thingvallavatn, Iceland’s largest lake.

Much of the area remains untouched by man, and signs or tourist information are scarce. Hiking trails cut a curious path through the lava fields of the park, with ice and snow long since having covered any trace of the perennial summer crowds.

As the temperature dips to 28° F (-2° C), the sun sits low on the horizon, casting a permanent late-afternoon glow over the scarred and lava-filled landscape. Small, cotton-candy clouds dot an otherwise perfect blue sky.

The gloomiest part of an Icelandic winter peaks on December 22 when the sun rises at the unfashionably late hour of 11 a.m. and fades again by 3 in the afternoon. Mid February, however, brings with it longer days, providing the perfect opportunity to glimpse the stark contrast of an Icelandic winter and, if you’re lucky, have it all to yourself.

We stop for lunch — a hearty bowl of lamb soup and brennivin, a pungent, caraway-flavored schnapps made from potatoes and seemingly infused with paint-stripper — at the site of the mighty Gullfoss (golden waterfall), where the Hvita River plunges 105 feet into a narrow canyon. We then motor west toward one of the country’s many geothermal fields at Geysir.

With more than 200 low-temperature fields and 32 high-temperature sites, geothermal energy has been a boon for Iceland, keeping power prices low and providing an abundance of hot water for its residents. Southwest of Thingvallavatn, the geothermal field Nesjavellir pumps water up from 6,500 feet (2,000 m) below, driving powerful steam turbines.

Water temperatures at this depth can reach a staggering 716° F (380° C). The condensed vapor from this process is then pumped all the way to the capital, where it provides Reykjavik locals with piping-hot showers — even if the sulfuric smell is a little harsh on the nose — and underground heating for the city’s pavement.

With the highest levels of geothermal activity anywhere in the world, it is little wonder Iceland is fast gaining a reputation as one of the cleanest countries in the world.

Even more regularly than Yellowstone’s Old Faithful, Strokkur (The Churn) erupts up to 35 meters into the air with an almighty blast, threatening to douse me — and my camera — with its watery fallout. It’s easy to tell when Strokkur is about to blow, as the large bubble at the surface of the fissure provides the telltale sign to get the camera ready to shoot.

Blowing off its head of steam every 10 minutes or so, Strokkur is the successor to the original Geysir, from whence all the worlds’ geysers get their names. Geysir, located in the southwest of Iceland, began erupting in the early 14th century, and stopped abruptly in the 20th century. Its blast of super-heated water often jetted 150 to 200 feet (46-61 m) skyward.

We stop briefly at the 3,000-year-old giant explosion crater, Kerið, where steep hillsides slope 180 feet (55 m) down to a blue-green lake. In 2004 the setting played host to an opera.

Performers perched on a floating platform in the middle of the crater’s lake as several thousand locals crowded the lip of the crater, marveling at the acoustics of the natural amphitheater. Last year, a concert was held in the crater’s bowl.

The weather in Iceland is often referred to in the third person, and locals can be heard to say, “Now he’s from the south” or “he’s gusting from the west.” Icelanders have an unusual — but understandable — affinity with the elements, not to mention their many mountains.

As Icelandic writer Guðmundur Andri Thorsson notes, “ … the Icelanders talk about mountains the way the Italians talk about football teams. They all support their own mountain. ” A curious simile, but one that, in a country of this beauty and grandeur, does give pause for thought.

On the last leg back to Reykjavik, a group of snowmobile riders gives a cursory wave, flying by in the opposite direction. Holiday houses scattered in the distance appear to be in hibernation, awaiting their owners’ return for the summer.

As we drive, I ask Rakki whether he’s ever considered living elsewhere. He smiles and remarks, “Why? There’s everything you could want for, right here.”

I nod and begin to ponder just which mountain I’m going to support.