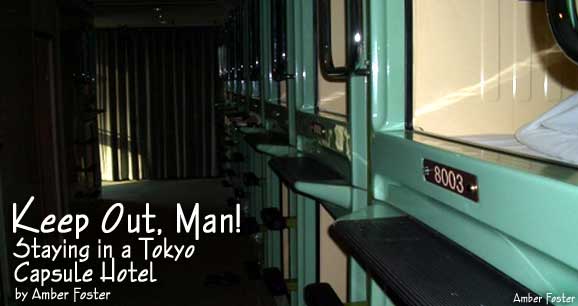 The small woman at the front desk greets me by pointing at my feet and shaking her head in consternation. Right. Shoes. Despite having lived in Japan for more than a year, I still forget. I take off my dusty sneakers and look up at her questioningly. She gestures to the wall of tiny lockers behind me, which I have managed to overlook on my way in. I choose a locker and exchange my shoes for a pair of oversized green indoor slippers that are clearly designed for male feet.

“Irasshaimase,” the woman says when I am done, giving me the formal greeting now that the more trivial matters have been attended to. She then points to the small machine by the front desk. It has a variety of buttons with different prices on it. My night’s stay is 3,000 yen, or a little over US$ 25 — A great bargain for a night’s stay in Tokyo. The machine quickly eats my bills and spits out a receipt.

After I have filled out a registration form, the woman hands me two small keys and begins speaking in a steady stream of Japanese. I understand maybe one word out of every five, but I get the gist of it.

My capsule is on the eighth floor. One key opens a locker where I can put my things, another key opens the door to the capsule room.

There is a small number written on the key that corresponds to the number of my capsule, number 8022. There is a bath on the ninth floor somewhere, although I’m not sure where, exactly. I’ll figure it out.

The inside of the elevator smells like stale cigarette smoke, as do all the floors in the hotel. I step out onto the eighth floor to find more lockers, and a bathroom with the distinct “Men’s” kanji (character) next to the door. That’s funny, I think to myself, I thought this was the women’s floor.

At that moment, a woman emerges from the bathroom. She appears to be in her fifties. I greet her in Japanese, but she does not look at me; instead, she mumbles something and brushes past me to go into her capsule room.

It is strange behavior for Japan. Curious, I peek into the bathroom to see two stalls, with two urinals on the opposite wall. Apparently, this floor only recently became the domain of women, and the bathrooms have not yet been converted.

When I’d told my co-workers I wanted to stay in a capsule hotel, they’d gaped at me. “But you’re a woman,” they told me. “Capsule hotels are for men.”

“Yes, but I heard about one in Tokyo that lets women stay.”

They shook their heads the way they always did when a foreign woman proposed doing something a “normal” Japanese woman would never do. For them, a capsule hotel was the cheapest accommodation to be had, the equivalent of a roadside motel in the States.

They didn’t understand that, to me, it was a uniquely Japanese experience. The fact that it was an experience that could usually only be enjoyed by men only made more appealing.

I walk to the door of the capsule room, and see a large sign posted above the door handle. It reads:

Women Only Capsule (Keep Out, Man!)

This makes me chuckle, but I fall silent as I open the door and enter the hushed atmosphere of the capsule room. All along either side of the central space are the square apertures of blue plastic capsules. Over each entrance is a brown screen that can be pulled down for privacy. There are only two rows of capsules along either wall, like bunk beds enclosed in plastic. My capsule is on the bottom, and I quickly toss in my backpack and crawl inside.

It’s spacious. I can sit up without any trouble, and at the foot of the bed is a tiny TV with a coin slot. A sign on the wall indicates it is a hundred yen for one hour of TV, and 500 for six hours. Near the head of the bed is a small control panel with an alarm clock and several dials whose function are a mystery. I decide I will play with them later, after having a bath.

Inside the locker in the outside hallway, I discover a small disposable toothbrush and lime-green hotel pajamas reminiscent of hospital scrubs. There is also a small washcloth for use in the bath. I take it and head up to the ninth floor.

The ninth floor doesn’t have any capsules. It has a small balcony looking over the Sumida River, and a table where people can sit and smoke. It’s empty. To the right, I see the familiar “yu” sign, indicating a bath. I stride past the curtain only to stop in my tracks.

A very large, very hairy leg is stretched out over the edge of the bath. For a brief moment I actually consider that it might be a woman’s leg, if she isn’t the kind of woman too concerned with personal grooming. I run for the exit. Luckily, the man doesn’t see me. On the other side of the room I discover a small corridor leading to the women’s bath.

As with many baths in Japanese hotels, it is public. It is a small affair with a row of squat showers and a tile-covered tub filled with steaming hot water. A young girl of about my age is showering, with her back to me, in one of the stalls.

She sees me, and bows politely. I quickly deposit my clothes in a small cupboard and enter the room. After showering, I get into the steaming hot tub. The girl sits next to me, but does not speak. People rarely speak in Japanese baths, for obvious reasons.

The window over the bath is open; I see bright lights and skyscrapers, and below, the red and white reflection of electric light on the river. The hot water is soothing to my muscles, which are fatigued from more than 10 hours of sightseeing on foot in Tokyo. Soon my skin is bright pink and it is time to go. The girl and I dress silently together, then wish each other goodnight before returning to our respective capsules.

That night, there are few women on the women’s floor. I get the feeling that capsules for women have not quite caught on in mainstream Japan. Of the four women who stay there that night, two are foreigners, and one is a strange Japanese lady who spends most of her time wandering about talking to herself unintelligibly.

The lack of inhabitants also makes the floor eerily quiet. In some ways, it is like sleeping in a coffin, but I don’t mind. It is quiet and dark. I sleep deeply and well, and wake up early, ready for another day of Tokyo explorations. As I am getting ready, I see the other foreign girl in the hallway and we share a conspiratorial glance. We are trespassers in this place, in more ways than one. It is a quintessentially male Japanese experience; and yet, here we are.

Read More: Only in Tokyo: Unusual Things to Do in Japan