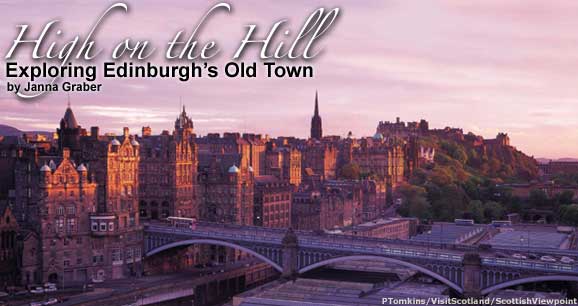 Cold and impenetrable. That’s how Edinburgh Castle must have looked to some of the first Americans who laid eyes on the Scottish fortress.

In actuality, the men weren’t really Americans — yet. The Yankee rebels had been captured by British forces during the American Revolutionary War.

They sent to prison in the dark stone vaults beneath the castle that now stands at the heart of the Scottish capital.

The prisoners’ wall graffiti and small artistic carvings can be still be viewed today in the “Prisoners of War” exhibition at Edinburgh Castle, a place the rebels never dreamed would become such a popular attraction for their future countrymen.

But popular it is — and for good reason. Rising from volcanic cliffs towering above the city, Edinburgh Castle has become one of this nation’s most iconic symbols.

It stands at the heart of Edinburgh’s Old Town, the most historic section of the city.

Many visitors start their exploration of Edinburgh here at the castle.

Part of Edinburgh’s World Heritage site, the castle has been the cornerstone of Scottish history for centuries. Some of its buildings date back to the 12th century.

The castle is home to the Scottish Crown Jewels, a brilliant crown, sword and scepter, as well as the Stone of Destiny, the coronation seat of ancient kings.

In another area of the castle, a moving war memorial honors generations of brave Scottish soldiers.

Exhibition signage at the castle is good, but not excellent. Rent an audio-tour headset for the best information. Free guided tours are also available.

How to Go there

Keep in mind that the castle is built on a steep hill and the cobblestone roads can be uneven, so exploring the castle can be physically taxing at times.

There is no parking at the castle, but a courtesy vehicle is available to assist those who need help reaching the castle.

Edinburgh is a walking town, and the best way to reach the castle and get around the city is to purchase a ticket on a hop-on, hop-off bus.

For around US$ 18, you can use the bus system for 24 hours. The buses stop at major attractions, and offer an easy way to cover a lot of ground.

The Royal Mile, which begins at the castle, is the oldest street in the city. A favorite with tourists, the street is lined with souvenir and kilt shops.

To be honest, the effect is a bit kitschy, but there are real finds along the street as well.

Chocolate lovers might prefer a stop at Plaisir du Chocolat café and pastry shop, just down the street on the Royal Mile.

More than 100 kinds of teas are available, along with rich, dark hot chocolate.

Just a five-minute walk from the Royal Mile are two of the best deals in town: the Royal Museum and the Museum of Scotland.

Entrance to the museums is free (it doesn’t get much better than that), and you could easily spend all day at either one.

The Museum of Scotland takes visitors on a chronological journey of the nation’s history, from prehistoric times to modern day.

Exhibits are well done, and offer insight into Scottish history, culture and the struggle to preserve Scottish language and culture.

One popular museum exhibit details the days when Vikings roamed these lands, leaving behind ship-shaped burial chambers and remnants of DNA which can still be found in many northern Scots.

Another fascinating floor of the museum explores the Medieval church and how it has changed through history.

The Royal Museum next door is popular with kids, offering interactive exhibits on science, industry and the natural world.

The Science and Industry gallery examines innovations made since the 1850s, some of them off-the-wall inventions that never took off, and others which became some of the most significant finds of our time.

At the end of the Royal Mile is the Palace of Holyroodhouse, an official residence of Her Majesty the Queen.

This baroque structure is still used for state ceremonies and entertaining. Guests can tour the state apartments and beautiful palace gardens. A free audio tour is included in the ticket price.

When you get hungry, head over to Grassmarket Street, a small cobblestone avenue not far from Castle Hill. Scottish cuisine is not for the faint of heart.

One of the traditional national dishes is haggis, a concoction made from sheep’s heart and liver mixed with oatmeal and suet, sewn into a sheep’s stomach that is boiled.

Admittedly, it doesn’t sound appetizing. Yet despite the fact that it is actually a tasty dish, most visitors are pleased to find an array of international cuisine at all price ranges in Edinburgh.

With a rich history centuries long, Edinburgh is a fascinating place to visit. Spend a few days in the Old Town, and you’ll come away with a better understanding of what being Scottish is all about.

Head to the Countryside

You can’t visit Scotland without seeing the alluring Scottish countryside.

And while you may not have three or more hours to drive deep into the Highlands, you can still get a taste of them in the Trossachs, a hilly region that is home to Trossachs National Park.

From Edinburgh, it’s a two-hour drive northwest to the Trossachs along easy highways and paved country roads.

The Trossachs are the Highlands in miniature. With craggy mountains, lush forests and mist-covered lochs, the region is the fodder for stirring tales of romance and mysticism.

Early 19th-century novelist Sir Walter Scott was so inspired by the region that he wrote The Lady of the Lake, a poem about Loch Katrine and its surroundings.

Today, a century-old steamship bearing the poet’s name still plies the lake. The relaxing 45-minute cruise is an excellent way to view some of Scotland’s natural wonders.

Babies on the Go: Travel-Wise Gear
Next Post: From High Heels to Hiking Boots in Kakadu National Park