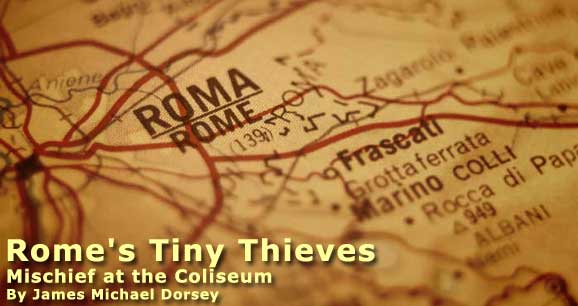 Gypsies have been an integral part of European culture for over 600 years. The first written accounts of them appear around the year 1500 when they were called the “Roma.”

They are believed to have originally migrated from northern India or Yugoslavia.

They are a nomadic people who still wander as a way of life even as they have been assimilated into modern European society. Mostly they live in small bands led by a respected elder.

And while it is never proper to generalize about an entire ethnic group, for all people have both good and bad in their numbers, some Gypsies have come to be known for their prowess as pickpockets.

The Life of Gypsies

In 1978, a fictional movie called King of the Gypsies showed the first inside look at how they live. One scene in the movie showed a mannequin covered with small bells.

A child training to pick pockets had to approach the mannequin and empty the contents of its pockets in complete silence. If a bell rang, the child was punished.

In 1997, the U.S. television show 60 Minutes had correspondent Diane Sawyer getting a lesson on just such a mannequin from a Gypsy who remained off camera while coaching her in the fine art of pick pocketing.

This by no means implies that all gypsies are thieves, for they are as colorful and diverse a group of people as one could meet. It does, however, set the stage for a personal story about them.

I was in Rome, staying near the Coliseum. The hotel doorman, concierge and man from room service had all warned me about the hordes of pickpockets around the Coliseum.

My First Day at Tour

Their stories made it sound like walking near this venerable landmark was like a sheep on the way to slaughter. Naturally, this intrigued me and I had to see for myself.

During my first day out, I watched several groups of small children approaching the local tourists.

The general plan seemed to be bumping right into a person from all sides at once. Then several children would thrust their hands out and cry for money.

I wandered around for a couple hours avoiding the children and simply watching. Then, in one alley, I found the mother lode.

It was here that several vans were parked. Dozens of children were milling around in small groups near each van. There was clearly one adult in charge of each group, giving them instructions.

The adults were nicely dressed, while the children were all in veritable rags. I watched as a few actually changed from nice clothes into these “work outfits.”

From the alley, they set out in groups to do their work. After ganging up on a person, they would immediately return to their designated van to unload the loot with their handler.

Having witnessed this act first-hand over and over, there was absolutely no reason for it to happen to me, but that is exactly what happened.

I saw the kids coming straight at me. There were six of them and two of the older ones held up a cardboard sign, pushing it right into my face as they approached.

The younger ones began pulling at my clothing and I could feel tiny hands all over me. I was so fascinated to be in the middle of what I had observed all morning; I could not help myself and let it proceed.

It was all quite surreal for I knew exactly what was going on, and even though I had tucked my wallet into a zippered pocket inside my parka, I knew without a doubt that it was gone.

I can only attribute my inaction at this time to that flawed human trait that allows us to watch as a flying object comes straight at us without being able to duck, or watching as an auto is about to slam into you and you stand perfectly still, watching it happen. A terrible human quirk.

The children were so adept at distracting one from the actual thief that I never felt the one tiny hand that made the grab.

In that split second after gaining their prize, they turned as a group and started to walk away. That is when I returned to reality.

I grabbed the tiniest boy who could not have been more than 5 years old. I pinned him to the ground with my hand to his throat and demanded my money back.

The rest of the group was so startled by my actions that they all froze in their tracks. They were not used to being confronted.

The boy on the ground went into a great act, kicking and screaming, pretending he could not breathe, even though I was nowhere near choking him, but simply holding him hostage.

A crowd began to gather and the other children began to cry, hoping to generate sympathy and make their escape. Look at this huge bully attacking a child!

At that moment, providence intervened. A cruising Carabinieri stopped to see what was going on.

Before I knew it, the Italian policeman in full uniform was lifting me to my feet, but rather than taking me into custody for assaulting a child, he knew exactly what was going on and grabbed the child by the scruff of the neck.

The policeman shook the child roughly and spoke rapidly in Italian. I could not understand a word but knew exactly what he was saying.

A moment later, the tiniest gypsy girl, who could not have been more than four years old stepped forward, lifted her skirt and produced my wallet from her panties.

The smallest one in the group was the actual thief. She was so small; I do not know how she could get her hand inside my coat to have reached the wallet.

The policeman handed me the wallet and said something with a shrug of his shoulders. I took this to mean, “What can you do?”

With that, the children took off running and the policeman returned to his car. There was no report or arrest, for this is just the way things are done here in Rome.

I watched as the children rounded the corner to their alley, where they would have to tell their father or uncle that they had been caught and would probably be punished for this.

As an afterthought, I looked inside my wallet. That morning, I had exactly US$ 100 dollars in US$ 20 dollar bills. Now there was only US$ 60 left.

In the few seconds I had hold of her brother, this tiny waif had the presence of mind to realize they had been caught and still managed to slip some of my money out of the wallet.

I could not help but be in awe of her talent. Looking up, I saw her standing under a tree almost a block away, looking directly at me.

She put her thumb under her chin and flicked it at me, then turned to run away.

Hiking Off the Beaten Path in Peru
Next Post: Medina Menagerie: Old City of Fez, Morocco