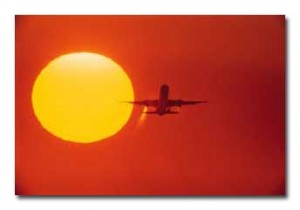 At the age of 20, we’re prepared to conquer the world. By 30, we’ve discovered the world won’t be conquered quite so easily, but we can live with that. At 40, the path of life has taken more turns than an old country road, but we’ve kept between the ditches somehow.

Each of these decade birthdays has caused me to re-examine my life. Looking back, I realized I’ve made major, life-changing decisions at age 20 and again at age 30. My 40th birthday was no exception. I needed a new quest; some way of testing myself. Must all the challenges be reserved for the under-30s?

Admittedly, I was feeling out of the mainstream. I had no desire to pierce my lip or wear a midriff top again. My friends and I joked about reaching the “invisible stage,” a time roughly between the ages of 35 and 45, when the constant focus on youth makes us feel practically invisible.

My quest took the form of a journey, the further away the better. I wanted to go alone, as proof that I could.

This inner struggle lasted for months. I hashed and re-hashed every possible reason why I should travel by myself. Yet, underlying it all was the big Kahuna: Did I really have the intestinal fortitude to go it alone?

Adding to the challenge, I planned the entire trip without the help of a travel agent. After about 30 phone calls, I found an inexpensive airfare to Barcelona, Spain – a destination that was not too exotic and one I thought I could handle.

The city had youth hostels (no longer just for youth), where I could stay with other women close at hand for less than $20 a night. Their public transportation system, including the subway, was upgraded for the 1992 Olympics and considered to be very safe.

The more I discovered about this vibrant Spanish city – buzzing “Las Ramblas” boulevard, 19th century architect Antoni Gaudí’s wild architecture and the picturesque Jewish Mountain “Montjüic” — the better the whole idea sounded. The pieces were falling into place, yet I was still scared. My adventuresome self cheered me on while my conservative self said the plan was far too risky. Doubts assailed me: You can’t speak a word of Spanish….what if you get the flu, break your leg or get mugged? The “what-ifs” went on and on, pecking away at my self-confidence, like vultures.

The adventuresome side fought a hard battle and won. I knew the solo trip was something I had to accomplish. When the airfare was booked, I breathed a sigh of relief, knowing the burden of indecision was lifted from my shoulders. Still, the real test was yet to come.

My departure date arrived. My one bag and I arrived safely in sunny Barcelona the following morning. I tend to think of travel as a series of peaks and valleys and I was about to enter my first valley.

Having reached the correct subway stop, I proceeded to get thoroughly lost. The guidebook said the hostel was a 15-minute walk from the subway, but it neglected to give specific details or mention that it was a steep, uphill walk. Although it converted to a backpack, my bag seemed to grow heavier with every step. I was exhausted from only four hours of sleep and my shoulders ached like mad.

Topping it off, the first two people I asked for directions spoke very little English. I chided myself for not obtaining more precise directions before leaving home. Or I should have tried to get a taxi instead? How stupid! I raged at myself.

For the first and only time during that week, I burst into tears. Several deep, choking breaths later, I pulled myself together and realized the irony. I’d come all this way and was probably within sight of the hostel, but couldn’t find it! Tears of frustration gave way to determination. At this point, however, my guardian angels provided three college-age backpackers lumbering up the hill. Salvation! I followed them the rest of the way. Lesson learned.

The hostel itself was a soaring peak, not a valley. Once a private mansion, the surrounding grounds held lovely exotic plants and palm trees. From the upper balconies, the rooftops of Barcelona shone in the Mediterranean sun and an elegant, white marble staircase graced the foyer. I loved it.

But the true high point of the first day was meeting Lucy, from Nairobi, Kenya. Lucky for me, the hostel put us in the same 4-bunk room. We hit it off immediately! Lucy and I were close in age but with one major difference, Lucy was confined to a wheelchair.

Not the least daunted by her situation, in fact challenged by it, Lucy got around Barcelona by taxi. Although she had a husband and two children back home, Lucy flew alone to Spain three times a year to sell African craftwork.

I won’t forget Lucy and the wonderful inspiration she gave me. Among other things, she’d won medals in the disabled Olympics and helped to build her own house. I felt privileged to meet such an extraordinary, self-confident woman. Lucy, it seemed, never let a little thing like a wheelchair stand in her way.

Her courage and firm resolve to travel alone made my earlier apprehension seem trivial by comparison. All my obstacles were imaginary. If Lucy had the wherewithal to cross-continents, so could I. Lesson learned.

Hostels are congenial places. By the second night, I had made two more friends, Gary, a 49-year-old from Scotland and his 20-year-old nephew, James, from England. Without trying, I became their impromptu tour guide. They were unsure about venturing into the subway, so I offered to show them the ropes.

Unfortunately, during our first excursion into the underworld of the subway, Gary ‘s wallet was stolen. One minute he was maneuvering through the turnstile and the next he was screaming at the top of his lungs, “Me wallet’s been lifted! Me wallet’s been lifted!” in his thick British accent. A stab of guilt lodged in my chest since I had brought them to the subway in the first place.

Both Gary and James instantly looked to me for guidance. Me, the indecisive, nervous nelly! I took control as best I could and sought directions to the closest police station. But as we turned to go, I saw a group of Spanish schoolgirls hovering near the turnstiles. With tremendous relief, I saw one of them waving around a man’s wallet, which she apparently found on the floor.

Again, it seemed my guardian angels were watching over us. Gary got his wallet back intact.

The return trip home had a few hitches, like a cancelled flight in New York and a tedious 23-hour day. But would I do it again? Absolutely.

More importantly, I learned that a little adventure is a good thing because in taking the chance we gain strength. If we no longer challenge ourselves, how can we expect to grow as individuals?

We all need to step beyond our self-imposed limits. The challenge doesn’t have to be travel; it could be anything from finishing a law degree to taking up rock climbing.