She dresses in pink and heads the A-list. Clark Gable, Kevin Costner, the Shah of Iran, all four Beatles, Adam Sandler (no accounting for taste) and seemingly half of the U.S marines have slept with her. She stops you in your tracks as you wander along the white sands of Waikiki. You may not remember her official title, The Royal Hawaiian Hotel, but everyone remembers their first sighting of the so-called “ Pink Palace of the Pacific.”

The Royal Hawaiian opened her doors in 1927 on Oahu, the third largest of the Hawaiian islands, as a six-story, 400-room luxury resort hotel for wealthy travelers. She was built on 15 acres (6 hectares) of coconut palm–fringed beach that was once the playground of the Hawaiian royal family — hence her exalted name.

The architecture, by the highly regarded New York architectural firm Warren & Wetmore, remains striking. It was built of pink stucco in the fanciful Spanish-Moorish style popularized by silent-screen star Rudolph Valentino (The Sheik, 1922), and then topped with cupolas (mission-style bell towers), reflecting a California influence.

Her owner, Captain William Matson, was the founder of Matson Navigation Company. His incoming luxury liners would pay tribute to the pink lady with three blasts of the whistle as they passed by. There would then be a great scurry as two tug boats would be sent out to the meet the ship with hula dancers, photographers, hotel staff and bundles of leis.

During the 1920s and 30s, only the rich, leisured class could afford the time and expense of traveling to Hawaii. That list included the Rockefellers, Fords and Duponts. They stayed at the Pink Palace for months at a time, bringing with them numerous steamer trunks, personal servants and even their own Rolls-Royces.

They were welcomed into the lobby, the same lobby that you can see today with its black terrazzo–marble floor, heavy chandeliers, handwoven carpets and giant floral arrangements . There they were met by some of the 300 staff, including 10 elevator operators, and bellhops dressed in Chinese costumes.

Then it was off to the best suites, which faced the garden, rather than the ocean. It was felt that after a five-day ocean voyage eyes needed lush green rather than more staring at the horizon.

Life at the pink palace was an endless whirl of tea dances, beach picnics, grand banquets and champagne parties. Men socialized in their private smoking room, while the women had a separate lounge, entered by parting long strands of pearls.

The wealth and frivolity came to a dramatic halt on the 7th of December, 1941, when the Japanese bombed Pearl Harbor; the United States entered the war the following day. Thousands of defense-related personnel moved through Hawaii during World War II, and of them many stayed at The Royal Hawaiian, which was leased exclusively by the U.S. Navy as a place for rest and relaxation.

Officers paid one dollar a day, and enlisted men could stay for 25 cents. But it was very a different Royal Hawaiian. Barbed wire stretched the length of Waikiki Beach; the bar became a soda fountain; the beauty salon became a dispensary; and the tennis court became a basketball court.

Some of the men did not treat the Pink Lady as well as her high-class customers. They carved initials in her doorframes, scarred expensive furnishings with cigarette burns and even hung their underwear out to dry on the elegant lanais. The hotel management looked on, perhaps at times nervously glancing at the floor. Beneath the floor, they had carefully sealed away the entrance to the Royal’s world-class wine cellar so it looked like part of the foundation. Thankfully, their guests never did find it.

When the war ended in 1945, the U.S. Navy returned the hotel to its owners, and the Pink Lady received a $2 million-dollar makeover. Ironically, it was the military that now formed the basis of Hawaii’s post-war tourist boom. Many had fallen in love with Hawaii’s climate and relaxed lifestyle, and wanted to bring their wives and families back for a visit.

By the 1960s the jet age was in full swing and tourists flooded Hawaii. A concrete tourist ghetto grew around the beach at Waikiki. The Royal Hawaiian’s luxuriant front garden was whittled away and a fortress-like shopping center obscured the Royal’s stately façade from passers-by.

But nothing could take away her pride of place, beach frontage on the sands of Waikiki.

Fortunately for nostalgia buffs, the façade, interior spaces and ambiance of this classic old hotel remain essentially unchanged. Alas, she is no longer considered five stars, but holds a Mobil Travel Guidethree-star rating. Accommodation in the original building (Sheraton added on a tower in 1969) is the least expensive. With Internet trawling you can save up to a third off rack rate.

I found my room in the historic wing spacious, with lofty ceilings. It had a four-poster canopy bed, flowered wallpaper and Queen Anne period furnishings. There was also complimentary, freshly baked banana bread.

The large area that once provided trunk storage had been turned into a fridge and wet bar area. And absolutely everything was pink — sheets, carpets, towels, napkins and even soap. 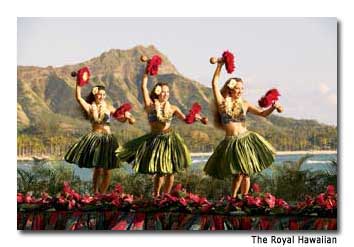 The quintessential tourist experience is to sit in the hotel’s Mai Tai Bar, sipping one of the signature pink rum cocktails while the sun dips into the horizon. Your backdrop is the rolling surf and Oahu’s land mark Diamond Head mountain towering in the distance. The trade winds rustle the pink beach umbrellas and the ardent surfers ply the waves.

On my last evening I see a woman sitting at the bar heavily made up to look as if she might be 20 years younger. She wears a pink floral dress, pink jewels and a huge pink hat that shades the gentle scarring of face lifts. Batting her eyelashes demurely at the stranger next to her as if she were still a young girl, she has the demeanor of a woman who knows that she is still desirable, despite the years.

Most of the hotel’s seafront rooms are in the new tower. A free historical walking tour of the Royal Hawaiian is offered every Monday, Wednesday and Friday at 2 p.m., guided by volunteers from the Waikiki Community Center.