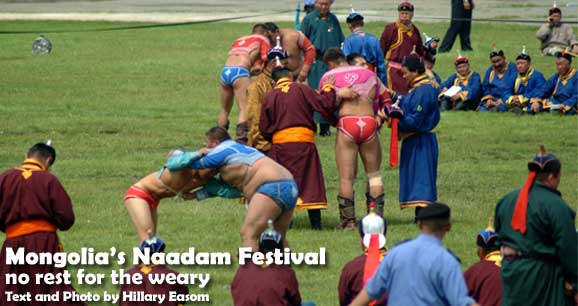 The man crouches low to the ground, one eye squinting, carefully taking aim before flicking his index finger off his thumb. The struck piece of sheep bone whizzes through the air and slams into the pyramid of anklebones assembled just for this very collision. The crowd applauds, and the competitor — modest in a typically humble Mongolian way — nods his head slightly in response. He stands and moves aside for the next shooter to take position.

Anklebone shooting is the newest event at the annual Naadam Festival just outside of Ulaanbaatar, Mongolia, a country of north-central Asia between Russia and China. Established in 1921 to mark the anniversary of the nation’s independence from China, “Eriyn Gurvan Naadam,” as the festival is officially named, refers to the original “Three Manly Sports” involved: wrestling, archery and horse racing. Today, little boys in Mongolia grow up dreaming of becoming a wrestler, an archer, or perhaps a sheep-bone shooter.

Naadam draws an audience from all over this rugged country, as well as a fair number of foreign tourists. Every year, the festival occurs on and around July 11 to honor the anniversary of the Mongolian Revolution. Most events take place over three days, supplemented by cultural programs sponsored by the Arts Council of Mongolia.

At the entrance to the stadium where the opening ceremonies are held, it is difficult not to notice the strange juxtaposition of traditional culture and modern style. Young Mongolians from Ulaanbaatar, the capital and the largest city (population 735,000), are decked out mostly in Western-style clothing — shorts, jeans, T-shirts, sneakers.

The older generations, however, and people who come in from the countryside, dress in traditional garb. Men on horseback weave stoically through the crowds, heads held high in velvet-trimmed caps, bodies draped in elegant and colorfully embroidered coats, feet protected by pointy leather boots that curl up at the toe. Women, their silky black hair braided to the middle of their backs, wear similar costumes in a rainbow of colors. They stand tall and proud, a characteristic evident in most Mongolian faces. These are the descendants of the mighty Chinggis Khan, who is still ceremoniously honored every year at the opening festivities.

Last July, over 500 wrestlers competed at the 83rd Naadam Festival. The competitors sat waiting on the side of the wrestling rings as Mongolian President Bagabandi presented the opening speech. Afterward, the first of eight grueling rounds of wrestling began.

One little wrestler drew significant attention from the crowd, even though he wasn’t there to compete. Only about one-quarter the size of the smallest competitor, this toddler was dressed in identical garb to the competitors — hat, loincloth, boots, and all. His grandfather chased him around the field as he scampered about, the crowd egging him on. Perhaps someday he, too, will be a champion.

Each successful competitor at Naadam performs a traditional victory dance: a slow-motion sequence reminiscent of an eagle’s flight. The wrestler raises his arms out to the sides and high above his shoulders, wings soaring, and lifts each knee chest-high before slowly stepping forward. He circles around the country’s flag in this graceful ceremonial gesture before returning ringside to await his next opponent.

After watching a few matches, many fans venture out to the archery area. The stands fill up quickly, and finding a spot on one of the benches can be a challenge. Male and female archers alike stand in a line, poised to shoot at the distant bull’s-eyes. Spectators watch silently as each arm draws back the bow and each arrow glides through the air to its target. Much less a show of testosterone, this sport depends on precision and grace.

Right outside the archery grounds is the bone-shooting tent, where the audience again observes a show of meticulousness as one competitor after another strives to knock down the anklebone pyramid.

The speed and stealth of the horses is astounding, particularly considering the distance they have already covered at this same cadence. The audience roars as the horses sprint across the finish line, their tiny riders hanging onto their manes and kicking as hard as they can. Occasionally a horse will suffer an injury or, as happened last year, a fatal heart attack from the tremendous exertion. For the most part, though, this is a glorious moment for both rider and horse, as a year’s preparation pays off with cheers from the lively fans.

In the afternoon, back in Ulaanbaatar, the Mongolian president returns to the stadium to present awards for the best archers and anklebone shooters. Winners of the horse races have ridden into the city and parade around the ring. The skilled child jockeys are given prizes for their accomplishments.

Wrestling matches continue through the evening, followed by an awards ceremony during which the president commends the new national champion — a coveted prize and honor. A speech is given, and nine white banners representing the nine Mongol tribes are paraded back to the State House. Another Naadam Festival has ended.

The celebration is not over, though. Tourists and locals storm the bars and celebrate with toast after toast of cold beer and vodka. The festival is exhausting, but rest can always wait for morning. After all, tomorrow is just another day.

Around the World in Toronto, Ontario
Next Post: Life Lessons from Barcelona