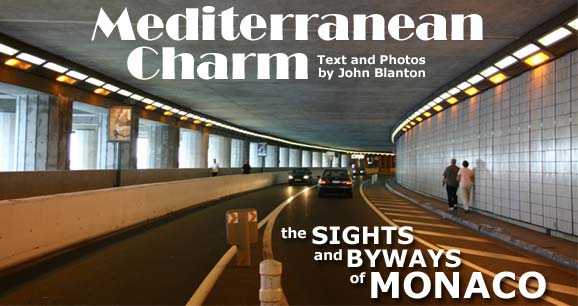 The Principality of Monaco is the size of a Texas cotton patch, but it makes up for its size in location. On the stunning south coast of France, it’s sustained by a robust tourism industry and the most famous gambling casino in the world, the Monte-Carlo Casino. More than a century ago Monaco abolished all taxation, making it a haven for people who have amassed considerable wealth and intend to keep it.

This is a country perpetually standing on its ear as it clings to the steep slopes along the Mediterranean shore. Monaco’s Stone Age inhabitants, and subsequently the Grimaldi family, chose this site for its security. In the old days it was so difficult to get to Monaco that the first line of defense probably consisted of pulling down all the road signs.

Even after the casino was built in 1863, patrons had to be transported in along a mule trail. What finally opened Monaco up to visitors was the completion of a rail connection to Nice, about 11 miles (17.6 km) away in France, in the late 19th century.

My brother and I hail from Tolar, Texas — with a population of 200 on about nine-tenths of a square mile (1.45 km 2) staked out on the prairie. I long had a hankering to see an entire country that was smaller than Tolar, and Monaco seemed a likely candidate.

A quick geographical fact check confirms that Monaco covers just 0.76 square miles (1.2 km 2) — smaller even than Tolar. But perhaps the biggest draw for us was our fascination with the Monaco Grand Prix, which takes place every May.

The Monaco Grand Prix is held on the most challenging course of the championship circuit. Cars capable of topping 230 miles per hour (370 km/hr.) average barely 88 miles per hour (142 km/hr.) around the two-mile (3.2 km) circuit. Fast reflexes are important; besides a top-gear bend through a seaside tunnel, drivers have to negotiate a grueling series of switchback turns that wind down to the waterfront.

Buildings, stone retaining walls and other manifestations of civilization line the way. A minor mechanical failure or a momentary lapse of concentration anywhere, and a driver can find himself parked against something solid.

In 1966, director John Frankenheimer followed the Formula I championship racing season to film the movie Grand Prix. He took his production crew to the races and filmed the action on some of the world’s top courses.

The movie cranks up with the starting of engines for the Grand Prix, and the first scene follows the cars in a breathtaking chase through the streets. The aerial shots, background set pieces and views from on-car cameras in the first few minutes of the film give the viewer a virtual Monaco grand tour.

When my brother and I visited the city with our wives, I was able to drive, from memory, the route that screen stars James Garner and Ives Montand took in the film’s opening race. We began where the race and the movie start, on spectacular Boulevard Albert 1, with the principality stacked up along the steep terrain on one side and the sparkling waters of the harbor on the other.

We continued up the hill along Avenue d’Ostende, where businesses and shops line the street on the side opposite the shore. This is the place for casual dining and some serious shopping.

At the top of the hill are Casino Square and the Monte-Carlo Casino, an ornate edifice with bas-reliefs, frescoes and sculptures, as well as stained glass, abundant marble and other extravagant adornments. Well-heeled patrons hustle in and out of the casino here, while tourists mill about and gawk at some of the world’s most expensive road iron parked in front of the Hotel de Paris.

Past the square there is a nice stroll down tree-lined Avenue des Spélugues. On the right side is the peaceful Jardin du Casino, with attractive shops and restaurants lining the other side. On race day the cars roar full-power down this narrow street, head-on into a hairpin turn.

Follow their path, and you will pass by the glitzy Hotel de Grand Casino and presently come to the waterfront and the entrance to the famous “tunnel.” This was once a real tunnel, but now it’s an addition to the parking garage beneath the casino.

Past the tunnel and along the harbor shoreline you can get an excellent view of the yacht fleet and Mediterranean beyond. At the end of your stroll is the Grand Prix Café, a popular spot for informal evening festivities.

In the Grand Prix, the race cars turn sharply right here, going around the café and back onto Boulevard Albert 1 to start a new lap. Doing so, they pass close by a life-size bronze statue of famed driver Juan-Manuel Fangio. Fangio won the race here, as well as his fifth world championship, in 1957. Nine years later he was back, driving one of the movie cars for Frankenheimer.

If you turn left at the café, continuing along Quai Antoine 1, you will pass by a number of inviting restaurants and watering spots. Farther on is the world-famous Oceanographic Museum and Aquarium, which sits on a cliff overlooking the Mediterranean. The facility is an authority on the Mediterranean and tropical marine ecosystem, with 4,000 species of fish. The Prince’s Palace, on the shoreline beyond the museum, is also an easy walk.

Other Monaco attractions include the Exotic Garden, where succulent plant species are showcased on rock faces; the Observatory Caves, with their illuminated stalactites and stalagmites; the Princess Grace Rose Garden, with its 4,000 rose trees; and numerous museums showcasing topics from prehistoric anthropology to the prince’s private collection of classic cars.

Monaco can be summed up as sun, water and money; there’s a lot to see in a small package. Take in on foot — the pace is right. This is a country that’s comfortable with where it is now and is no hurry for tomorrow — except during the Grand Prix, when it’s full speed ahead.

Swallow hard and get ready to shell out for the good tickets. Three days in the A1 grandstand costs you 780 Euros (US $936). Thursday through Sunday, general admission is 262 Euros (US $314).

Hotel rates in Monaco are kind of steep, much like the countryside, and you can find cheaper accommodations a short drive away. Save the difference and drop some cash at the casino.