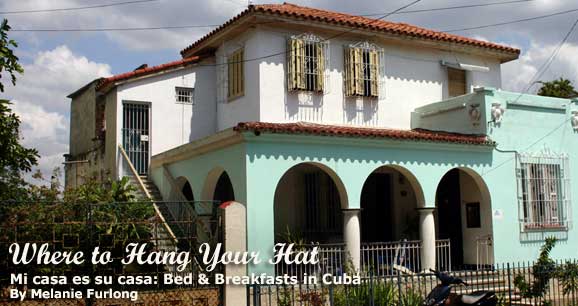 While buying an all-inclusive package may be the easiest way to organize a beach holiday in Cuba, others may feel they are not able to experience the real Cuba in the tourist-only resort areas. A casa particular may be the answer.

Staying at a casa particular, or private house, is the best way for visitors to learn more about Cuba and its people. There are thousands of these Bed & Breakfasts on the island.

Suzana Sanchez, has been renting out four bedrooms in her Nuevo Vedado home, located in one of the nicest areas in Havana, to tourists since 1995. Clean and bright, the rooms offer air conditioning, ceiling fans, separate bathrooms, double beds, hot water, telephones, security boxes and refrigerators. Casa de Suzana (1060 Calle 26) also employs two maids and a night guard for the gated parking area at the front of the house.

It is not difficult to find these private accommodations. Check out www.casaparticular.info, for example. Paul Lamot, a Belgian citizen who lives near Antwerp with his Cuban wife, began running the Web site in 2000 to support exactly Suzana’s kind of business venture. His Web site is a portal to casa particular sites and provides a list of casas around the country, which are licensed by the Cuban government and often run around US$ 25 a night.

“Casa owners that operate legally are allowed to advertise their place using little fliers that are mostly given to arriving tourists by young people,” says Lamot. Or you may be approached by someone riding a motorbike, who will try to direct you to a particular casa. “That is about the extent that advertising is allowed.”

Independent travelers hungry for information about the casas in Cuba have been flocking to Lamot’s site. By the end of its second year, 8,500 had visited the site, and Lamot estimates some 40,000 people will have visited the site by the end of 2004.

There are no government statistics for how many tourists stay in casas particulares each year, but Lamot estimates thousands choose to see Cuba this way. “It is the only viable (and inexpensive) alternative lodging in Cuba. A casa will cost you half of a cheap hotel and will provide a better room and better meals.”

“Beyond the low prices though,” explains Lamot, “there is an overwhelming desire with most people to experience Cuba. The ‘tourism apartheid’ of the government has made the resorts sterile and ghetto-like.” People that stay at an all-inclusive giant hotel have not seen the real Cuba, Lamot believes.

Lamot also says that many of the tourists who visit Cuba and stay in anything less than a five-star rated resort are appalled by the service and food they experience in a lower rated accommodation.

“Receiving sub-standard services in the hotel creates an image of uneducated and uncaring people. Staying at a casa particular will show you that the Cubans are actually the opposite. The service and care you will receive in a good casa will only create and reinforce the image of the Cubans as an open and helpful people.”

The best casas Lamot has seen are in the capital city. “I found the most luxuriouscasas in Havana, but there are some great casas in every town. Santiago can surprise you, and Trinidad with its historical buildings has some stunning casas.”

In most cases, staying at a casa includes the room and breakfast. Some casas will charge separately for breakfast and any other meals are always to be paid for separately. Lamot says it is advisable to eat at your casa, or a paladar, a private restaurant, as the quality of the food is much better than it is in state restaurants, and the prices are lower.

If you want to rent a car or perhaps hire a car and driver for the duration of your stay, the owner of your casa can also help you with the latter. This option usually is cheaper than renting your own vehicle. Either way, staying at a casa particular will give you more freedom to explore the island and find the Cuba of your imagination.

Portal to 174 Casa particular sites in Havana and more than 1,000 sites at www.casaparticular.info