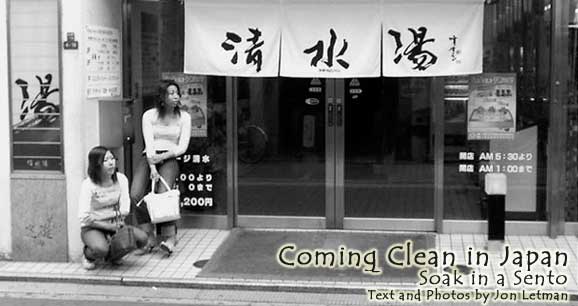 Traveling in Japan’s largest cities can be a test of mental endurance. The constant high-speed sensory overload coming at you from every angle, at first exhilarating, can eventually become exhausting. The blur of rush hour continues all day with trains, packed to bursting, empty into frenetic subway and railway stations on multiple levels. Endless waves of humanity add to the crush and din of the Japanese megalopolis as commuters scurry into crowded streets, busy offices and labyrinthine shopping arcades.

Everywhere you turn there’s another garish sign, rows of vending machines lining the concrete, slick black taxis creeping in the neon haze and parked bicycles crowding the sidewalks. In search of zen bliss or a photogenic temple, you move past the flashing colored lights, through the assault of noise and shopping crowds. This much stimulation can wear you down.

When it all gets to be too much and I start to feel like a hamster in a Habitrail and need to unwind, I drop into a Japanese bath house, known as sento.

Sento, whose Chinese characters mean “money” and “hot water,” originated in the Buddhist temples of 8th century Japan. Over time, sentoevolved into centers for gathering, socializing and bathing.

Until the 1970s, many homes in Japan did not have their own bath and so a daily visit to the sento was simply part of life’s routine.

Usually visited in the early evening, a trip to the sento was a way to relax at the end of the day, meet friends and enjoy a good scrub and hot soak in a large communal bath.

For the traveler in urban Japan, thesento provides the opportunity to refresh after a long day of shopping or sightseeing or before a night out in the neon jungle. I have also found, through months of painstaking research, that a visit to the sento is the perfect remedy for a sake-induced hangover.

Sento can be found throughout Japan from the smallest of fishing villages to the center of the biggest cities. In a smaller town, one looks for a prominent smokestack-like pipe emitting steam, but in most cities, it is best just to ask for a recommended sento.

There is a fairly rigid set of rules to be followed to ensure a pleasant and successful visit to a sento. Rule #1: Follow what the Japanese inside the bathhouse are doing. If they take off their shoes, you take off your shoes.

Usually there are small lockers with keys (don’t lose it!) outside the sento for storing shoes. At smaller local bath houses, customers may simply line their shoes up neatly (facing outward) at the entryway. If this is the case, leave your shoes there — they will be fine.

At the entrance to most sento, an attendant sits at a counter or bandai, accepting payment from customers. A typical sento costs around 350 yen (a little over US$ 3) with some sento charging additional fees for special baths or saunas. Extra fees vary from sento to sento, so ask if you are not sure.

As you enter the sento, you can also buy toiletries such as soap, shampoo, disposable razors and so forth, and, for a nominal fee, borrow bath towels.

After you have purchased your accoutrements, proceed to the changing room, usually just beyond the main entry. If there is any doubt as to which changing area you are entering, make sure the attendant sees you and they will certainly correct you if you are mistaken.
Depending on the size of the sento, the bathing area may be fairly small, only large enough to accommodate 10 or 12 customers at a time, or it could be a sprawling atrium-like space with numerous baths, saunas and steam rooms.Once inside the changing area, you will find more lockers, larger than the ones for your shoes, but not by much. There you will disrobe (entirely) and taking only your towel, bathing goods and your locker key (usually on a string or wrist band) proceed to the bathing area. Usually the baths are on the same level as the changing area and it is obvious where to go, though in larger facilities, the baths may be on another level so if you are unsure, observe others or ask.

The next big rule of visiting a sento is NO SOAP IN THE BATH. Today, this most basic of Japanese bathing practices is quite well known, but if this is new to you, commit it to memory. Soaping, scrubbing and rinsing isalways done outside of the bath and you will find spigots and small plastic stools and buckets for this purpose. Going into a sento bath (or any other Japanese bath or hot spring) with soap on your body is unthinkable and would be a major faux pas. Baths are for soaking and relaxing, so wash and rinse off well outside and then enjoy the baths.

Now that you are clean and ready to soak, step over to the ofuro (bath) but before you immerse yourself in the deep tubs, you may want to test the water with your hand to find out exactly what type of bath you are about to enter. Typically, sento baths will be hot (around 107 F/42C), very hot (around 118 F/48C) and cold (around 64 F/18C).

There may also be several variations of Jacuzzi baths, baths colored and seasoned with healthful natural herbs and some sento also feature what is known in Japanese as denkiburo, literally “electric bath.” This is exactly what it sounds like — a bath with an electric charge running through it. The current is low and not harmful (older patrons often enjoy the sensation of electricity stimulating their bodies), but unless you too enjoy “electric bathing,” touch the water with your hand before plunging in.

Another basic rule to follow when visiting sento (also known as onsen) is keeping all towels out of the baths. You may actually see some Japanese breaking this common rule, but most ofuroya (another name for bath houses) prefer towels are kept out of the baths for the purposes of hygiene. Generally, nothing should go into the bath except you and your smile.

Remember, visiting a sento is not only to wash and refresh oneself, but to simply relax and, for regular customers, to socialize. As you enjoy the baths and atmosphere of asento, you may notice regular customers, often older Japanese who may have been visiting that particular establishment every day for much of their life. And while the actual number of sento in Japan has been declining since around 1970, they still play an important role in the social life of many Japanese.

As a gaijin (foreigner) in a sento, you will naturally stand out, but generally this is not a problem and you will probably be either welcomed with a shy smile or slight bow, or perhaps given no more attention than any other stranger would receive. Still, some foreigners complain about being starred at in sento, which could be a case of curiosity on the part of the Japanese or oversensitivity on the part of the foreigner, or maybe a little of both.

“When in Tokyo, do as the Tokyoites” is a simple guideline and will probably serve you well in an unfamiliar setting such as a sento. On a darker note, there have been well-documented cases of public bath houses in Hokkaido where foreigners were apparently not doing as the locals, and were, in fact, causing quite an uproar to the extent that some bath houses and other businesses took the extraordinary step of refusing entry to foreigners or those who looked foreign.

This has become an ongoing issue which has been taken up by local human rights activists whose efforts to stop the banning of certain people from Japanese bath houses and hot springs can be read about here. By being respectful and mindful of Japanese bathing customs, you will help breakdown unhelpful stereotypes while ensuring a pleasant and memorable experience for you and those who follow.

One thing that many bathing establishments do not allow is the entry of persons with visible tattoos. This is intended to keep out members of the yakuza (Japanese organized crime), but may very well be extended even to persons who have no apparent ties to criminal activity. If you have a mural of inky snakes and dragons slithering down your arms and legs, or even a tiny non-threatening butterfly above your belt line, you could potentially be prohibited from entering a sento.

Having said that, this writer has never heard of any foreigner being refused entry because of a tattoo. In fact, one sento I frequented for almost a decade not only didn’t enforce the ‘no tattoo’ rule, the sento was frequented by obvious yakuza. Such a bath house is the ideal place to admire the incredibly intricate tattoo work that covers the shoulders, biceps, chest, back, buttocks and upper legs of many yakuza.

If you are fortunate enough to bathe with the yakuza, you will be amazed at the beauty and detail of their body art, though discreet viewing is recommended.

Gangsters being the exception, you are more likely to find yourself scrubbing beside a “salaryman” (this is what Japanese call businessmen), a neighborhood merchant or the little old man (or woman) who, over a lifetime of frequenting sento, has polished their bathing rituals to a fine art.

It is here, in the sento, where you, as a visiting foreigner, may come closest to feeling like you are part of Japan. In the sento, all non-essentials are literally stripped away. In a country where form, method and decorum are so indispensable, the sento is the one place where everything is reduced to its most basic element: the soap removes the dirt, the steam cleanses the mind, the water calms the body and the light, pouring in mid-day from an overhead window, illuminates the scene of humans together, washing off the layers of fatigue and filth that cling to us as we walk through the clutter of the city.