Namibia is a land of red dunes, dirt roads and eerily quiet coastal stretches. There’s space to breathe, to reconnect with nature. But as I ventured through the country on a 4×4 camping trip that took me from town to desert, I discovered that Namibia is even more than that – it’s supernatural.

While traveling in Namibia, I liked looking out the car window. Watching the landscape go by in a soft blur of green and yellow and tawny brown while my mind drifted over random thoughts was a peaceful way to while away the time.

But when a warthog emerged from the bush and attempted to cross the road, all hell broke loose in our vehicle. An emergency stop wasn’t easy with a caravan attached to our 4×4, and no one wanted to see Pumba get flattened. A moment later we exhaled simultaneously as the warthog reappeared and scuttled to a halt on the other side of the road, as if that whole ordeal hadn’t happened.

We had left Cape Town three days ago, yet with kamikaze warthogs on the loose, it already felt like we were worlds away. Traveling more than 5,000 kms from Cape Town to Etosha National Park and back again – with plenty of breath-taking destinations in between – and involving many a rutted road, including desolate otherworldly landscape and a close encounter with a jackal, this 17-day trip would show just why Namibia is likened to a foreign planet that intrepid travelers return to over and over again.

The day before, my parents and I had traversed the Noordoewer border post, which forms a barrier between South Africa’s N7 and the B1 of Namibia. It’s a weird feeling, crossing into another country by road. When travelling by aeroplane, the time spent in the air signals the gap between point A and B, yet the road doesn’t yield quite the same effect.

The flora changed gradually as time passed and the transition into Namibia – completed on the same day we left Cape Town – was seamless, save for some forms and a stamp of the passport.

However, as soon as Noordoewer was replaced by a grey-brown landscape dotted with nothing but large, obscure rocks reminiscent of a prehistoric meteor shower, I knew I’d returned to the familiar unfamiliarity of our neighboring country.

Situated 139 kms north of Noordoewer, a speck of a town called Grünau functioned as our first stop-over, and we booked into the Grünau Hotel as the sun was setting.

The following morning, we got hustling early to be in Windhoek by that afternoon, where another on-the-fly booking was made – this time at an actual campsite. Urban Camp had a rustic feel, but the occasional sound of a passing car reminded me that I wasn’t in the bush just yet. It’s also conveniently on the same road as Joe’s Beer House. With hundreds of empty Jagermeister bottles lining the walls, a dusty bicycle hanging from the ceiling and merry, beer-guzzling tourists at the table nearby, I practically inhaled my Kudu steak.

After two-and-a-half consecutive days of travelling, and the heart-stopping encounter with a daredevil warthog, the moment finally arrived to set up the caravan and settle down at Okaukuejo. It’s one of three campsites in Etosha, 22,270 square kilometers worth of national park area named after the vast salt pan that the fences enclose. On arrival, a hefty bull elephant brushed past the camp’s perimeter like a good omen for what was to come.

Yes, the waterhole was worth the thrice-daily visits. A low stone wall forms an amphitheater around it and I’d spend hours reading books and snapping photos as the animals came and went, constantly shifting the scene.

On the fourth day, a photographic tour-group arrived and, along with their tripods, they skulked around the wall’s edge in time with the setting sun. You’re not supposed to talk, so it was blissfully quiet save for the whisper and click of camera shutters, hushed chatter among other travelers, and a gentle splash as the animals took their afternoon swim.

Etosha has seen little rain recently, and certain stretches were so grey and lifeless that it was easy to become despondent at the lack of wildlife sightings. But huge herds swarmed around the salt pan’s edge at Ontdeka waterhole, and the refreshing greenery on the Halale side of the park offered better sightings.

Our final evening curtailed any lingering disappointment, though. While it may sound like an African cliché, watching the sun set behind the spiny acacias while drinking icy-cold Amarula, with my parents and a couple elephants for company, was well worth the indulgence. 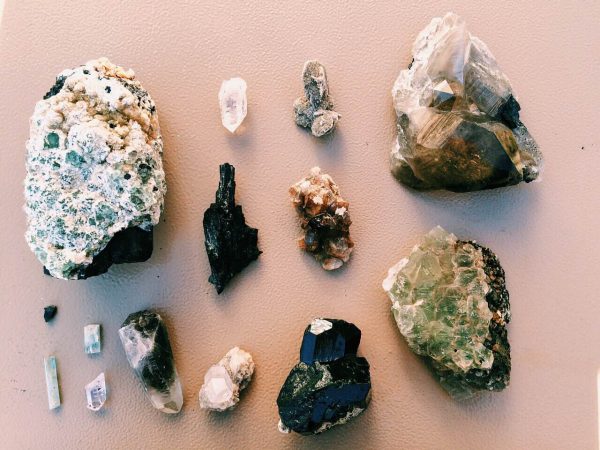 The Spitskoppe area is famed for crystals such as these, which we bartered for using food as currency. Photo by Emma Strumpman

The campsite at Spitzkoppe, a vast expanse surrounded by caramel-colored mountains, was far removed from city life – bar the private long drops. But this makes it the wild, sparsely habituated place that it is. This kind of environment is also ideal for stargazing, which is exactly what we did that first night, warmed by a crackling wood fire and the heat radiating off the mountains.

Spitzkoppe’s mountains look like soft toffee drizzled on a grassy plane, and we watched as other people climbed high up the boulders, following the rivets molded into the rock-face.

When we tried it for ourselves, the climb wasn’t as simple as it looked. But scrambling up to the arch (a granite formation shaped like a giant eye), and getting a photo standing beneath it was well worth the small scrapes and bruises.

There were also plenty walks and hikes to do, but after a full morning of gallivanting on the Mars-like mountains, we were more than ready for a shower. Thankfully, there are actually outdoor showers at the site’s entrance, and a flush toilet if the long drops prove too daunting. But they’re far enough away from the main campsites to make you feel like you’re still “roughing it.”

Spitzkoppe also forms part of the Erongo region of Namibia, an area mined for crystals like aquamarine and amethyst. You can hustle for your favorites at the Uiba Oas Crystal Market at the Spitzkoppe turnoff on the B2, although we preferred to buy from the informal stalls further down the road towards the campsite. Friends of ours had told us that the sellers prefer to trade in food, as supermarkets in the area are few and far between. Sugar, Fanta and chocolate were in popular demand.

Located at a point where the Namib Desert trickles into the Atlantic Ocean, Swakopmund – in stark contrast to Spitzkoppe’s heat and isolation – is a bustling seaside city often shrouded in a cold, wet fog. In typical Namibia fashion, we had gone from one extreme to another in the space of a two-hour drive.

I’ve been to Swakopmund twice before, but explored the area further this time around and found that I’d severely underrated it. In our one full day there, we took a morning trip to Walvis Bay, climbed Dune 7, visited the crystal gallery, munched on various German pastries, and hustled for carved makalani palm-nuts (the perfect souvenirs and gifts) on the promenade. With its traditional architecture, German bakeries, and seemingly foreign accents – 30,000 of about 2 million Namibians speak German – Swakopmund hints at colonial Germany.

Though we’d just spent five days amid a plethora of animals in Etosha, it was in the coastal town of Walvis Bay (a 20-minute drive out of Swakopmund) that I had my most memorable wildlife encounter.

Walvis Bay is synonymous with flamingos, but I wasn’t prepared for the unbelievable and intimate experience of seeing those elegant, pink-feathered birds en masse and up close. The water in this area is rich in food-producing nutrients, which is why Walvis Bay is one of the best places in the world to see flamingos in the thousands before they flit off to Etosha to breed. 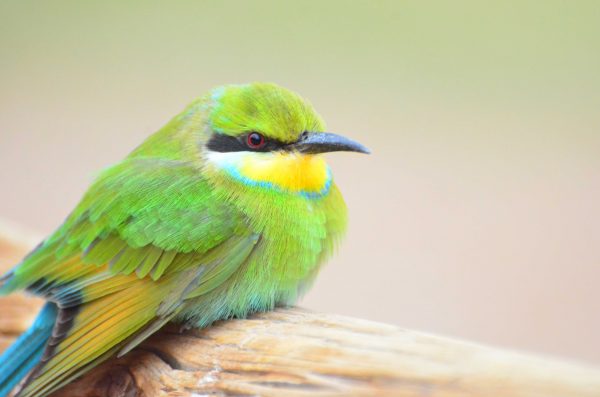 A bee eater, spotted while relaxing at Ai-Ais Resort. Photo by Emma Strumpman

Namibia’s strangeness, stillness and solitude removes you from the humdrum of daily life. It’s rejuvenating for the soul. But, after two weeks of dust and dry weather, my skin was dehydrated and cracked, and feeling anything but revived.

Fortunately, Ai-Ais Resort, tucked in between tall reeds and slate mountains at the bottom of the Fish River Canyon, provided the kind of luxurious relaxation my body was craving. A hot spring feeds the spa, and I spent my afternoons soaking up its healing powers in the indoor warm bath, while watching other holiday-makers pad around in their pristinely white bathrobes. While a camping road trip is the ideal way to experience this country, the constant movement can have you feeling rather exhausted. Ai-Ais remedied that.

You know you’ve done road tripping right when you’re ready to return to the comforts of home. But as soon as we crossed the Namibian border, my long-forgotten phone started bleeping and was almost thrown out of the car window and into the rushing waters of the Orange River. I guess I wasn’t quite ready to come back down to Earth.

If You Go to Namibia

Author bio: Emma Strumpman is a Film & Media graduate student, currently living in Cape Town, South Africa. She is always up for an adventure, whether it’s discovering a new hiking trail, finding a body of water to dive into or a sandy beach to meander along, meeting new people, trying new foods, hanging out with some wildlife or, of course, travelling. You’ll hardly find her without notebook or camera, as these experiences she loves to record in words and photographs.