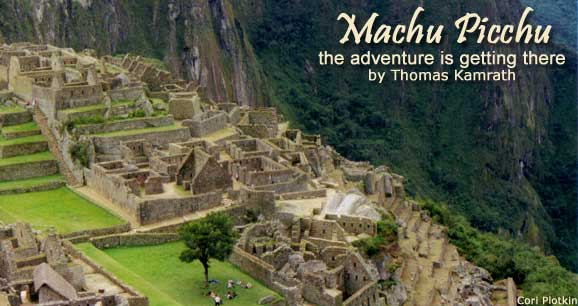 It’s 4:30 in the morning of day five. The porters have just come to our tent to wake us. No coffee or tea this morning ― we need to get moving to reach Intipunku, the Sun Gate, by 7 a.m., or we will miss the sunrise over Machu Picchu.

The fabled pre-Columbian town of Machu Picchu, which is thought to have been built by the Incas around 1440 A.D. and was inhabited until the Spanish conquered Peru in 1532 A.D., is located on a ridge between the mountains of Machu Picchu and Huayna Picchu in the Peruvian Andes, at an elevation of about 6,750 feet (2,057 m) above the Urubamba Valley. Unknown to the outside world until 1911, the original purpose of the “Lost City” is still being debated.

There are two plausible theories that most historians believe could be true: It was an agricultural site, maximizing the valuable growing sector between the jungle and high valleys. Or it was a large observatory. There are a multitude of ruins that are related to the observation of the sky: the Torreón, where the sun shines through a window opening at dawn of the winter solstice (June 21 on the southern hemisphere), highlighting the rock in the middle of the temple; Intihuatana (Hitching Post of the Sun), where the sun could be ceremonially tied and prevented from falling lower in the sky in winter; and the Temple of the Moon, located on the far side of Huayna Picchu.

After our early morning wake-up, we are still a couple of hours away from the overlook. It is pitch black. I can feel the heavy humid fog left behind by last night’s rain. This is why the tour dossier listed “flashlight.” Unfortunately, my brand-new purchase lasted only one pre-trip check. Fortunately, Dave, my traveling partner, had a spare key-chain light which provided me with a shadowed view of the ground in front of me. The majority of our hiking party of nine must have missed the memo, as we have only four flashlights between us.

An hour later, we are on the trail. It’s dark, foggy, wet and the rocks are slippery. We alternate places between the flashlights “haves” and “have-nots.” As we march, the only voices heard are from the “haves”: “Step up, step down, watch out for the rock on your left.” We are probably better off not knowing there is a 200-foot (60 m) drop-off inches from our feet.

We reach Intipunku with only 15 minutes to spare. The view at sunrise is not what we were told in the travel brochures. Three feet (1 m) in front of our faces is a white substance called “fog.”

As we inch our way down toward the Machu Picchu ruins, my anticipation is mounting. When will the fog lift? Slowly, as if someone is cranking up a curtain, Huayna Picchu — also called Sugar Loaf Mountain — begins to appear, overlooking Machu Picchu. First there are fleeting glimpses, and then finally, there it is, in its full splendor.

When I envisioned going to Machu Picchu I always thought of mysterious ruins and the famous postcard picture looking toward Huayna Picchu. But there is more to this manmade/natural wonder of the world. It is the adventure of getting there. I knew I wanted to experience the feel of the Inca culture and the energy of this “sacred valley.” I also knew I didn’t want to take the train, but needed to hike. Depending on your starting point, the Inca Trail is 25 to 33 miles (40-53 km) of semi-arid desert, breathless mountain passes and stunning tropical cloudforest. Our hike took us four nights and 25 miles (40 km) to finish.

Our local guide Mauro keeps telling us “no worries, the hike is 90 percent mental and only 10 percent physical.” I am not convinced that the physical percentage is correct, but there is definitely a continuous adrenaline rush as we get closer to Machu Picchu. By getting myself into pretty good shape, running 20 miles (32 km) and hiking a 500-foot (152 m) hill five to seven times per week before I left for Peru, I was able to enjoy the beauty of the hike and not worry as much about aching muscles and lungs.

Half the fun of doing a trip like this is meeting people from around the world. Our Inca Trail tour group consists of Mauro; a woman from France living in New York; a woman from England living in Australia; a man from New York; a Korean woman living in Philadelphia; a Chinese woman going to college in California; a former co-worker of mine living in Nevada; and a couple originally from South Africa who are now U.S. citizens; and seven porters who round out our trekking team.

The first day of the Inca Trail hike was almost as eventful as the final day. We had to start the hike a half-day early, due to a planned national strike. The transportation systems were about to be shut down, and quick thinking by Mauro got us out of Cuzco — about 50 miles (80 km) southeast of Machu Picchu, where most hiking companies are located — while we still could. It got a little nerve-racking as we were leaving Cuzco. The van driver had to perform a 180-degree turn to avoid a group of protesters heading our way.

The early start gave us four nights on the trail, and allowed us to reduce our miles per day to about six (10 km). The first and second day we were on the west side of the Andes. The terrain was semi-arid to tundra. We had lucid blue skies and fantastic views of Peru’s 20,000-foot (6,100 m) peaks. Our second night was the roughest. After hiking 10 miles (16 km), we camped at 12,600 feet (3,277 m). A combination of dehydration and temperatures dropping into the 20s F (about -3 C) gave everyone a restless night of sleep.

The next morning was the most challenging part of the hike, but also the most satisfying: Dead Woman’s Pass. At 13,700 feet (4,215 m), it is the highest point of the trail. It helped to be fresh and starting at 12,600 feet (3,877 m). We made it to the pass in about an hour and waited for our fellow hikers to arrive (the ones who were working on the 90 percent mental).

After Dead Woman’s Pass the terrain began changing to cloudforest. It is on the fringe of the Amazon, and has a jungle feel. On this part of the trail the foliage has to be cut back every three months or it would engulf the trail. No wonder it took until 1911 for American explorer Hiram Bingham to “re-discover” Machu Picchu after the abandoned settlement had been mostly ignored and later forgotten by Spanish colonial authorities.

The workmanship of the original Inca Trail (built more than 500 years ago) was extraordinary. The majority of the trail is original and in good shape. The stone steps, for the most part, have not crumbled, still fitting snugly together without mortar or adhesive. Occasionally we hit some rough spots where the trail was deteriorating, this always coincided with parts of the trail that had been rebuilt.

It has been said that the seven separate mountain valleys leading into Machu Picchu emanate an elevated energy level. I am not sure if it was that or the accomplishment of finishing the hike and achieving a dream that had been with me since 10th-grade geography class, but there was definitely an energy surge in full swing while visiting the ruins.

We toured the structures once housing ancient Incan communities and marveled at the temples to their gods, many of which are situated on steep precipices. The architecture at Machu Picchu is the most impressive part of the ruins, with the majority of the structures having been built by piling precisely cut stone blocks. Nothing but gravity and careful planning holds the stones together; the cracks are so small that, even centuries later, a credit card could not pass through them.

Back in Cuzco following the trek, our group stuck together after the official tour was finished. We celebrated our successful hike at a local restaurant. I was the only one to brave ordering the national delicacy ― guinea pig. They serve it with the head and feet intact so one doesn’t think he or she is being ripped off. I also tried another dish, something that looked like a cat. It didn’t taste like chicken or duck, as I had been told. It had more of a wild, tangy flavor ― probably closer in taste to the woodchucks that burrow under my deck back home ― not that I know what they taste like!

A trip to South America should always include Machu Picchu. If you do not have the time or energy to walk the Inca Trail, at least take a day or two and ride the train from Cuzco. Prices for food and lodging are very affordable. A train ticket runs about US$ 40 one-way and US$ 75 round trip. For budget travelers, late night “backpacker” trains are available for lower prices.

Currently you must fly to Lima first and then transfer to a local airline for a flight to Cuzco. Plan on spending one or two nights in Lima. Do not make a close connection for your flight to Cuzco, as Customs entering Peru are slow.

Taking a bus or train from Lima to Cuzco will add another 24 to 36 hours to your journey.

A number of regulations and restrictions have been imposed over the last few years that have taken away from the free spirit of hiking, but they have reduced congestion. You must hike the trail with a registered guide. The amount of foot traffic per day is regulated. Even the weight of the gear the porters are allowed to carry is monitored.

Unless you want to haul all your camping gear with you, a tour that includes porters who carry most of your gear is the preferred method. This allows you to carry only a daypack, and gives you more time and energy to enjoy the hike.

There are many tour groups that plan Inca Trail trips. They range from all inclusive to local guided tours. A good cross section of tours would be:

Commission for the Promotion of Peru

Niagara’s River Road: An Autumn Wonder of the World
Next Post: A Weekend In Tacoma, Washington