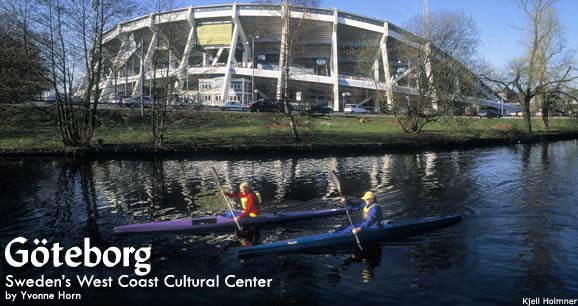 Göteborg by the numbers: 481,410 inhabitants; one opera house; 25 theaters; 37 cinemas; 50,000 trees; 207 trams; 570 restaurants; two universities; 175 square meters of green space per citizen; one Poseidon statue; two market halls plus one fish market; 18 museums; one national orchestra; 5,000 roses in one rose garden; 157 cafés; 10,940 yearly ship moorings; 19 golf courses; more than 1 million departing from Göteborg at the turn of the 20th century, most bound for America —one-quarter of Sweden’s population at the time.

“Göteborg by the Numbers,” as the informational sheet I picked up from the tourist office was called, contained enough “gee whizzes” to pique my interest in Sweden’s second largest city (with a population of 485,000), located on the country’s west coast.

Who would not find immediately endearing a city that proudly boasts 207 trams? Such a civilized way to get about, and the ideal transport for those wanting to become acquainted with a city. And, ah, Göteborg’s green space–to–person ratio. A major city devoted to giving everyone plenty of elbow room — what a concept.

I began my explorations on foot on Kungsportsavenyn, commonly known as the “Avenyn” (The Avenue), Göteborg’s answer to Paris’ Champs Elysées. This long avenue with shops, numerous restaurants, cafés and pubs is the place to break for afternoon fika — coffee and cake — while taking in the passing parade.

On its southern end, Avenyn is anchored by Götasplatsen, the city’s cultural center, where the Konstmuseet (art museum), with its extensive collection of Scandinavian art, keeps company with the Konserthuset (concert hall), home to the city’s acclaimed symphony orchestra; the Stadsteatern (municipal theater) and the Stadsbiblioteket (municipal library).

In the center of Götasplatsen, the Poseidon Fountain is a work of art that caused much uproar at its installation over the god of the sea’s “manliness.” Whether the controversy was settled by enhancement or downsizing is today left up to viewers’ imaginations. Poseiden’s view of the city is magnificent, straight down Avenyn into the tangle of the old city with the wide sweep of Göteborg’s harbor beyond.

At the turn of the 20th century, those 1 million–plus Swedes walked down the cobbled streets of old town, carrying bundles of their worldly belongings as they made their way to the harbor to board ships bound for America. They would have walked past Kronhuset, Göteborg’s oldest preserved secular building, built as the town’s armory, in 1643. Today it anchors various craftsmen’s workshops, including a goldsmith and a glass blower.

At the harbor, cute-as-a-button, vintage passenger ships of the Göta Canal Steamship Company caught my eye. The vessel was among the 14 floating ships at the Sjöfartsmuseum (maritime museum). For more than 137 years these small boats have traversed the Göta Canal between Göteborg and Stockholm.

To my right, the opera house soared over the harbor, its bold, ship-like, contemporary architecture as much a draw as the world-class performances inside. Both the museum and the opera house emphasize that Göteborg is, and has always been, a city of the sea.

By the mid-1700s, Göteborg was a city to be reckoned with, an economic force made rich by traders and great merchant fleets, most notably the Swedish East India Company. The harbor then was filled with ships bound and returning from the four corners of the world. Even today, the name “East India Company” evokes images of exotic ports, holds laden with tea, spices, silk and porcelain.

Visitors can step back to that time at the City Museum, once home to the East India Company’s offices and vast warehouses. Although the museum displays cultural history from antiquity to the present, I was particularly interested in a floor dedicated to the company’s adventurous sea voyages to China.

While Stockholm plays hopscotch over 14 islands, Göteborg wears a necklace of canals that work admirably as directional signposts: “If I come to the second canal, I’ve gone too far.” While some of the canals have been filled in to become streets, those remaining are a reminder that it was the Dutch who built the city, at the request of Gustav II Adolf, in 1621.

A statue of Gustav II Adolf presides over a square outside Stadshuset (city hall.) The interior of the hall is an exquisite example of Sweden’s clean and simple design.

Water, too, provides a fine introduction to the city, via an open-air Paddan sightseeing boat, which follows the old city moat and canals into the harbor; plenty of lively tales are provided along the way. The tour ends where it begins, at the Kungsportsbron, the bridge where Avenyn disappears and the old city begins.

I, of course, had to take in at least several of those 18 museums tallied in Göteborg by the Numbers. Rohsska Museet, a museum of Swedish design and handicrafts, carries a rich mixture of furniture, glass, silver, china and textiles.

Other parts of the city are in themselves living museums, such as the 19th century worker’s district, Haga, just a five-minute walk from the city center. Haga’s pedestrian alleys are lined with shops dedicated to handicrafts and second-hand goods. One shop makes clogs that are so comfortable it was a temptation not to slip a pair on then and there and clomp off into the district’s cobblestone streets.

Haga’s cafés are known for their non-matching furnishings, red-checked cloths and second-hand settings. Those who love massive sticky buns should check out Kafé Husaren.

Across the canal from Haga is the 1874-built Feskekörka (fish church), which is not and never has been a church, but is so called because its architecture strongly resembles one. Inside, counter after counter is filled with the freshest and best pulled from the sea, arranged like works of art. An outstanding seafood restaurant, located in what the uninitiated might assume to be the choir loft, overlooks the bustle.

The availability of largesse from the sea is one reason that Göteborg is central to Västsvensk Mersmak (western Swedish flavor), an organization dedicated to the forging of partnerships between restaurants, chefs and purveyors of quality raw ingredients that are so readily plucked from the surrounding sea, forests and farms. As a result, Göteborg is fast gaining recognition as a European culinary epicenter.

As a result, point your finger to any one of those 570 restaurants and you’d probably not go wrong, especially given the fact that seven Göteborg chefs have been named winners of Sweden’s annual “chef of the year” award during the past decade, creating an eagerness for other Göteborg chefs to aim high. Four Göteborg restaurants are starred in the Guide Rouge (formerly Michelin Guide).

Fond Restaurang, Bar & Café, featuring Swedish traditional and modern foods by Chef Stefan Karlsson, located adjacent to the Poseidon Fountain, is one such restaurant. Other starred restaurants are Sjömagasinet, specializing in seafood, with a magnificent harbor view; 28+, serving international cuisine in an Old World setting; and Basement Restaurant & Bar, featuring 6- and 8-course tasting menus, in the center of town.

One would not expect to eat well at an amusement park, but I did at Hamnkrogen, a restaurant in the midst of the thrilling rides, lovely gardens and carnival attractions of Liseberg amusement park. The park is one of the largest tourist draws in Europe, with more than 3 million visitors a year.

It was at Hamnkrogen that I first sampled an excellent version of what is known as “West Coast salad,” a creamy lobster and shrimp mix, here topped with pearls of roe, which is ubiquitous all over western Sweden. Considered a perfect end to a Göteborg night out is a “Half Special,” a hot dog on mashed potatoes topped with West Coast salad — a treat I decided to forego.

Many of the city’s restaurants include sidewalk eating areas, with neatly folded blankets placed at the ready over the backs of chairs so that guests can wrap up should the weather be less than balmy. Göteborg is as well known for weather that results in dripping hair and droplets on eyelashes as it is for glorious days punctuated by plentiful sun, warm westerly winds and the cry of soaring seagulls.

At Smaka, a restaurant that takes classic country cooking to culinary heights, I bypassed blanket huddling in favor of dining inside on pickled herring presented three ways, followed by meatballs with mashed potatoes and lingonberries —traditional, hearty dishes to be savored on a drizzly night.

On a day punctuated by plentiful sun, I strolled the walkways of Trädgårdsforeningen, a 19th century park laid out along the old moat, which accounts for a good deal of the city’s elbow room; it’s also the place to admire the 5,000 rose bushes tallied in Göteborg by the Numbers.

There I came upon Restaurant Trädgar’n, where a lavish buffet of dozens of hot and cold offerings, including salmon four ways, was laid out on long, open tables — delicious, inexpensive and obviously a Göteborger favorite.

Hotels abound, as might be expected in a city that attracts millions for such sporting events as the 1995 world championships in athletics, held in venues that include Nya Ullevi, the largest outdoor stadium in Sweden.

I headquartered my stay at two: First at the four-star First Hotel G, improbably located inside the gorgeously renovated central train station with Ullevi but a free kick away, moving on to the recently renovated Elite Park Avenue Hotel, which enjoys an ideal location practically at the feet of the Poseidon Fountain on Avenyn.

I left Göteborg aboard a train from Central Station en route to Stockholm. As the train rushed into the countryside, I realized what a heartbreaker it is to leave this charming, sophisticated city.