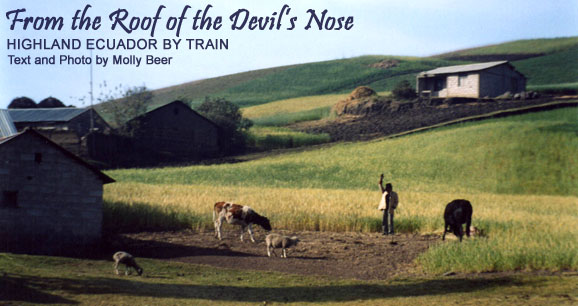 Before dawn, the mitten girl met us on the roof of the train. We had come early for this prized vantage point, however cold and uncomfortable. The mitten girl remembered us from the day before; we had indeed bought woolen mittens from her, matching them to hats we had purchased earlier in the market (if not to our new wool blanket that was really a poncho with the neck still sewn closed). Now the mitten girl would hook us up with a seat cushion rental for US$ 1 (we had been heartily advised ahead of time to splurge) so we wouldn’t sit for six hours on just the hard, gently sloping metal roof of the old train.

The train to El Nariz del Diablo (The Devil’s Nose) departs from the small Andean city of Riobamba that has been nicknamed Friobamba by Ecuadorians who agree that this pretty highland city lorded over by the snowy Volcán Chimborazo is indeed quite cold. The train then winds southward across Andean highlands to the town of Aluasí and then beyond to the precipitous rock face at the edge of the Andes known as the Devil’s Nose. The train descends and then returns to Aluasí again. Without derailing or any other mishap that must be scheduled in when traveling in Ecuador, the trip takes about six hours.

The train track down the Devil’s Nose was once an engineering masterpiece that solved the mystery of how a train might run from the high altitude capital of Quito to the Pacific ports near Guayaquil. Since that time the devastation of El Niño floods have torn up the tracks and only the part between Riobamba and the Devil’s Nose itself remains operational as a tourist attraction. Even those who ride the train get off in Aluasí above El Nariz del Diablo and catch a quicker, more comfortable bus back to Riobamba or continue south to Cuenca.

All of the early birds were foreigners from everywhere but Ecuador. Travelers arrived well ahead of departure time to claim the space closest to the back of the train away from the diesel engine fumes, which are not as bad as the smoke and coal soot of the old steam engines that were used until recently.

The best seats are on the coveted right hand side, which has the better views and faces out over the cliff for the final descent. In addition to mittens, hawkers sell instant coffee, snacks for the trip, and candy to toss to people you pass en route. The Ecuadorians, who apparently all preferred the left side of the train to arriving early, scrambled up to the roof moments before the train pulled out of the station, already behind schedule. Only a few families opted to sit inside of the train. Everyone else braved the roof.

We were lucky. The day was unusually clear for the highlands and the early light was lovely against Chimborazo, whose distinctive, three-humped summit looms 20,700 feet (6,310 m) above sea level. We creaked our way through Riobamba and out into the classic patchwork hills of highland Ecuador.

The train wound its way past little thatched farms where pale sea-green new wheat contrasted golden heads of barley and darker, purple-green fields of fava beans, which are similar to lima beans. Men in woolen ponchos straightened in their fields to wave at the train, as did women in jaunty hats and turquoise shawls pulling goats or cows behind them on strings. I was slightly disturbed, however, by the unsmiling children who clearly imagined that the harder they waved, the better the chances someone would launch a lollipop their way. At one hilarious point, the train had to stop while a grinning boy in a fedora hat ran around waving a stick trying to clear his frantic sheep from the tracks.

At times, the train ran along a road and from our vantage point we got a good look at offended-seeming hogs and sheep bracing themselves atop speeding buses. They stood amidst potato sacks, but beyond reach of the bundles of alfalfa that would be sold in highland markets to feed cuy, the guinea pigs that are popular fare with a glass of fermented corn drink (one of the many unpredictably alcoholic beverages referred to as chichi). Unfortunately, outside of Riobamba there have recently been isolated outbreaks of bubonic plague attributed to the cuy that live inside homes, but unless you’re planning to sleep with cuy in your bedroom, you shouldn’t worry.

The picnic I had scrounged together in Riobamba the day before included a bottle of hot tea (restaurants are always happy to fill it up and the herbal teas in Ecuador are delicious), a couple ripe mangos, some bananas and bakery sweet rolls. One of the most fascinating things about Ecuador is that one can begin in the Amazonian jungle to the east, climb up through the Andes, drop down the other side, and arrive at the Pacific in a single day. This condensed equatorial geography means that fresh exotic fruits are abundant year round even between the snowy peaks.

Finally, after several, slowly warming hours of landscape, a few pit-stops in small towns for bathroom breaks and buying empanadas (pastries filled with meat), bags of crunchy fried fava beans, or greasy fritada (fried pork), and, luckily, none of the derailing that some travelers complain of, our train reached the Devil’s Nose itself. This is theoretically the highlight of the trip, as the name implies, but after several hours of truly awesome scenery, the descent down the rock face was, for me, only one more thing to gape at.

I won’t give away the secret to the Devil’s Nose descent; that’s for those who go, but I will say that the carefree sense of Wild West freedom that a six-hour ride on the top of a train through breathtaking landscape down to the bottom of a cliff, is something worth experiencing first hand.

The train ride costs US$ 11 for foreigners and renting cushions is highly advised. (Ecuador has “dollarized.”). Buy tickets at the station the day before you plan to ride so you won’t need to worry about the office being open the morning of departure.

Dress in layers and bring sun protection — the train ride starts out bitterly cold and then by noon you’re sitting under hot equatorial sunshine.

It may be possible to ride the train all the way back to Riobamba again, but no one does. Buses are abundant in Aluasí that go back to Riobamba or on to Cuenca. Buses in Ecuador cost about a dollar an hour regardless of quality.

As always, keep your plans loose — schedules change, trains break down and nothing in Ecuador is a sure thing. You should consider this part of the adventure.