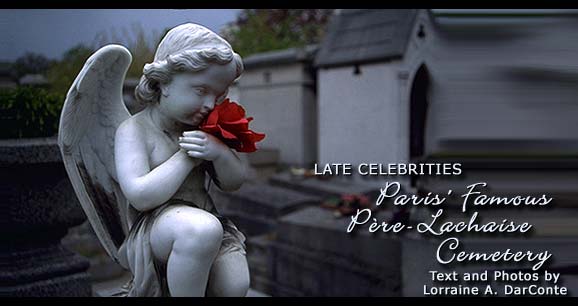 “Have you seen Oscar Wilde?” a British couple asks. “Not yet,” I reply. “But I stumbled over Marcel Proust and Edith Piaf.” And I mean that both literally and figuratively, as I step gingerly between the crowded headstones in Paris’ famous Père-Lachaise Cemetery.

Of the 20 cemeteries in Paris, France, Père-Lachaise is the most legendary. It’s also the city’s largest park, occupying several thousand acres of land. Approximately 2 million people visit each year, wandering along the tree-lined cobblestone avenues, often searching for a beloved author or musician. And the place is chock full of them, thanks to some clever, early public relations. The cemetery is named for Père François de La Chaise (1624-1709), confessor of Louis XIV.

The cemetery, in the 20th arrondissement, was established by Emperor Napoleon Bonaparte, after cemeteries had been banned inside Paris in 1786 for public health reasons. Père-Lachaise opened in 1804.

The urban planner Nicolas Frochot developed the cemetery and convinced local authorities to re-bury some celebrated and notorious folk such as French playwright Jean-Baptiste Poquelin, better known as Molière (1622-1673), and poet Jean de La Fontaine (1621-1695), making it the place for the rich and famous to be laid to rest.

Eventually Frochot even sold a burial plot to the site’s original owner, although for significantly more cash than he paid for the entire graveyard. Not much has changed since those early days; it will still cost an arm and a leg (well, both arms and legs) to be buried here today. But some things are de rigueur!

Spending time in any one of France’s historic cemeteries is a terrific way to “visit” world-renowned musicians, poets, scoundrels, politicians and other popular personalities. Okay, the down side is they are dead — but so what?! You can still have your picture taken with them. Photographers — paparazzi de la mort, as I like to call them — are crawling all over the place.

Yes, some get even down on all fours, looking for that perfect angle. However, I suspect they, like myself, are more interested in what’s above the ground than below. These celebrities are pretty laid back. They don’t run, hide behind sunglasses or newspapers, and they don’t throw temper tantrums, verbal barbs or painful punches.

Père-Lachaise can be compared to an outdoor sculpture garden of sorts, since a vast majority of the gravesites are adorned with exquisite, one-of-a-kind works of art. Tucked among the crypts, mausoleums and monuments are delicate stained-glass windows, unique sculptures, fine bas-relief and other art that rivals the works exhibited in some of the world’s best museums.

There are life-size portraits carved in marble; avenging, weeping and guardian angels; and faithful replicas of favorite pets. Hundreds of headstones bear insightful words of wisdom and/or tear-inducing tributes, some humorous, some poetic and some just a trifle mean-spirited.

It’s not all peace and quiet here among the deceased. Having read several accounts of occasional purse-snatchings, I’m wary of the few lone males skulking about the mounds of marble. I stay within shouting distance of small groups of people and watch my back. Ultimately, I have no trouble and am once again happily distracted by the details of an old soul’s final resting place.

There are flowers everywhere — fresh, faux, wilted and long dead. Small bouquets rest upon worn headstones, while single red roses are tucked lovingly into the hands of stone angels and pretty young maidens, their sad expressions forever frozen in time. There are other mementos scattered about as well — children’s toys, religious objects, candles, books and even hand-written notes.

It is easy to lose one’s way in this mighty necropolis, for every corner turned yields a surprise of some sort, be it an amusing epitaph that brings a smile to my face or a cat leaping out from behind a tree, elevating my heartbeat just a notch or two.

It is also the last forwarding address of such noteworthy people as the French can-can dancer Jane Avril (1868-1943; made immortal by artist Henri de Toulouse-Lautrec), composer Frédéric Chopin (1810-1849) and American dancer Isadora Duncan (1878-1927).

Although it is among the most popular tombs, surprisingly, there are no crowds gathered around Jim Morrison’s (1943-1971) grave today, as I had coolly anticipated for the final resting place of The Doors’ lead singer. In fact, there isn’t a living soul in sight.

Though I’m sure Morrison’s plain, unceremonious tombstone still gets a lot of foot traffic from faithful followers, Oscar Wilde (1854-1900) is clearly the cemetery’s resident star. The Anglo-Irish writer is buried beneath a grandiose art deco angel that is covered in various shades of pink and red lipstick kisses — tiny rosebuds of devotion delicately planted on a massive piece of concrete. Flowers — predominately long-stemmed roses — in various stages of decay are strewn about the site. His epitaph reads:

And alien tears will fill for him
Pity’s long-broken urn,
For his mourners will be outcast men,
And outcasts always mourn

My personal favorite work of art is an exquisite sculpture of a young woman wearing a long, hooded dress. I discovered her one cold, gray March day on my second trip to the cemetery. Perched on a crypt, lost in dreamy thought, her every curve revealed through finely chiseled stone; she is more sensuous and lithe than most living, breathing creatures.

I don’t know for whom she mourns — a beloved husband, father, mother or child. And I don’t know the name of the artist who coaxed her from the granite slab. I only know that I am inexplicably captivated by her quiet splendor.

Alas, as much as I would like to, I cannot traipse about Père-Lachaise forever, as the list of VIPs to visit is interminable, and the number of headstones too many to count. Perhaps in another life. However, I do recommend the next time you’re in Paris, or any other city for that matter, that you drop by the local cemetery and spend a little time dwelling on the passed. I promise, you’ll be eternally grateful you did!

If You Go to Paris

Two other prominent Paris cemeteries are located in Montmartre and Montparnasse. The Cimetière du Montparnasse, (14th arrondissement, metro line to Edgar Quintet), also referred to as the South Cemetery, covers more than 1,800 acres (7.2 km²), and is the third largest cemetery in Paris. It was created in 1824 by combining the properties of three farms.

Sleeping soundly at the Montmartre cemetery (a short walk from metro stop Place de Clichy) is writer Emile Zola (1840-1902), filmmaker François Truffaut (1932-1984), Yolande Christina Gigliotti, better known as Dalida (1933-1987; a contemporary French singer whose tombstone is a life-size monument of and to herself), and Impressionist painter Edgar Degas (1834–1917). The Montmartre, or North Cemetery, was created in 1798, closed down and then reopened in 1831.