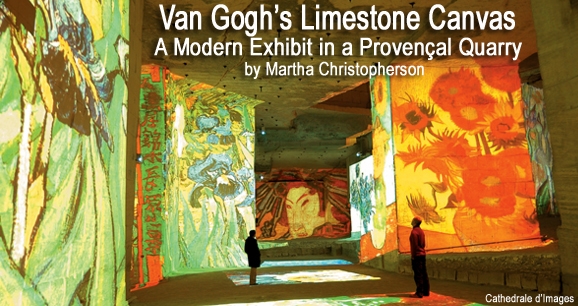 It’s no secret Vincent Van Gogh was inspired to paint some of his most vibrant works during his time in the south of France.  His Provençal paintings invoked swirling brushstrokes of starry skies, golden-hued sunflowers arranged in curvaceous vases and swaying plane and cypress trees.

When I hear a super-sized exhibit of Van Gogh’s art is being presented in a cold, dark, rock quarry in Les Baux de Provence, it strikes me as a metaphor for his tenebrous moods and bouts of depression rather than a backdrop for his colorful masterpieces.  This is something I have to see.

I drive the 5 1/2 miles (8.9 kilometers) from my hotel in St. Remy to the village of Les Baux. Situated in the hilly range of the Alpilles, it’s not far from the ruins of an historic, medieval castle.

Years of excavation had left the stone configured into a series of deep chambers with pillars and walls 20 to 60 feet tall (6 to 18 meters) – a  perfect venue for a larger-than-life art show.

The bright sun reflects off the white, stone walls and I am relieved to be near the cool rock on such a warm day.  As I step inside the dark quarry and wait for my eyes to adjust, I am swept up in a beautiful soundtrack of amplified classical music.

A spectacle of light and color depicting a field of red poppies flutters at my feet, projected from somewhere I can not detect.

I feel as though I’ve been transported onto the very canvas of Van Gogh’s Field with Poppies.

I venture deeper into the quarry and find dozens of images staring back at me from the stone walls.  Self-portraits, landscapes and Van Gogh’s iconic painting The Bedroom at Arles are projected on the natural surfaces towering above and around me.

Wisps of the mistral from a Starry Night whirl past me and boats on the sea at Saintes-Maries-de-la-Mer bob from one stone screen to the next.  Is the chill I feel from the mistral? The sea?  I am no longer certain it is just the dankness of the quarry.

The silhouettes of other visitors are dwarfed by the images. From across the quarry I see the shadow of a figure standing in front of Van Gogh’s Irises,another figure blends in with the black birds taking flight in Wheatfield with Crows, and another peers up at the white-powdered face of The Courtesan in Japanese costume.

Sometimes the paintings hang still.  Other times they float by on the strains of a sweet melody or are eerily magnified, in the case of Van Gogh’s blue eyes.

Thousands of images are used in the production and are beamed by projectors onto the 43,000 square feet (400 square meters) of limestone.  A computer controls the sequence, motion and lighting and it is all synced to the powerful music of the soundtrack.

Images were first projected on the walls of this quarry in 1975 by Albert Plécy. A French journalist, he was also a life-long innovator in photography and media.  He was inspired by a multi-screen show he had seen in Montréal in 1965 and returned to France determined to find a place where a similar concept could work.  Cathedrale D’Images was launched and a new show has been staged every year since 1977.

Past presentations include Strolling in Africa, Portraits of China and the Colors of Cézanne. This year’s show is directed by Régis Prevot, an independent producer and screen writer known in France for his work in documentaries and live television.

As I drive back to St. Remy, I can’t help but wonder if the men who had toiled excavating limestone from the quarry ever imagined what they left behind would become a canvas for such a great artist.

Martha Christopherson is a San Diego-based freelance travel writer. Her travel stories have appeared in numerous publications, including the Christian Science Monitor and L.A. Parent Magazine.