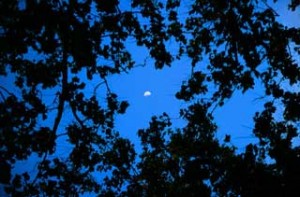 We called him “Maniac Mack.” He was our hosteller at the “Hostel from Hell,” Britain’s version of the Bates Motel (from the movie “Psycho”). Mack even had actor Anthony Perkins’ glassy eyes. It was the weirdest experience that I came across during a long-ago bus tour of England.

I was turning 30, and let’s just say I wasn’t taking it well. What to do? Leave the country. So, I hooked up with a bunch of brainiacs for a literary bus tour of jolly ol’ England. We left on my birthday. That helped me to forget I was now the big 30.

For 17 days I toured sites around England related to literature. Great stuff – the downs of “Watership Down” of the bunny tales Richards Adams, Tintagel Castle from Arthurian legends, the home where C.S. Lewis wrote the children’s classic, “The Lion, the Witch and the Wardrobe,“ and the like. Then, for a scenic respite in the middle of the tour, we bussed to England’s bucolic Lake District.

We stayed in hostels wherever we went. Most were decent, some were primitive, but Mack’s in the Lake District… well, Mack’s was eerie.

We had a hard time just finding the place. It was hidden in a forest, up a long, unmarked road that was too narrow for our bus. So all 25 of us, young and old alike, huffed and puffed and hauled our luggage up the two-mile (3.2 km) path. In some places it wasn’t even paved; it was mud and rocks.

By the time we reached the hostel, we were spent. It was run down, and so were we. We had spent the day hiking miles of craggy ruins and now we just wanted a cold drink, a warm dinner and a relaxing evening. Not bloody likely.

When we walked into the hostel, we found Mack racing around the disheveled kitchen. His bushy hair bounced as he flew between plates and pots. Perspiration dripped from his forehead. He never looked up, but stared at the plates as he spoke.

“Assistant left.” He grabbed a can of peaches.

“Suddenly.” Threw the cans by the plates.

“Only here a month.” Pawed through drawer.

“Is there anything we can do?” our tour leader asked, uncertainly.

All I could think of was “The Shining,” a movie in which Jack Nicholson’s character and his family are holed up at a remote resort for a lonely winter while Jack slowly goes insane and finally axes everyone. How did we know the assistant left this morning? How did we know she left at all? What did she know that we didn’t? Was there really ever an assistant?

We looked at each other, and not knowing what to do, decided to bunk in. Maybe he just needed a little peace. As we walked toward the drafty, unkempt dorms, we heard crashes and bangs from the kitchen.

The dorm was basic, really basic. The women’s was a separate building, so we had to go back outside and haul our luggage a little farther. There was little heat and only two bathrooms for 15 women. And, they were outside, plus one didn’t work. The thought of having to walk outside in the dark (there were no lights), around midnight, and into the forest to get to the one working toilet to relieve myself gave me goose bumps. “I will not drink anything past 6 p.m.,” I silently vowed.

Half joking, we discussed our options. We weren’t even sure where our bus was, so how could we find another hostel? Besides, it was late — we’d never find a place now. And we hadn’t seen a phone, so we couldn‘t call. Plus, no one was walking back up and down that mudslide again. It would be fine, he’s just a little unnerved, we said.

Dinner was uneventful. It wasn’t great, but everyone lived through it.

At one point we talked about our next stop: Stonehenge, the mysterious circle of megaliths about 5,000 years old. Mack, who glared at his plate until now, piped up. He was wide-eyed.

“You know those aren’t the real rocks!” he hissed, as if divulging dirty international secrets.

We looked at him in disbelief. It only magnified his intensity. He told us he’d been in the plastics business and found out that “they” had taken away the real Stonehenge rocks and made fiberglass copies. “That’s what you’re going to see, FAKES!” His fist hit the table.

We changed the subject.

As is the custom in hostels, we did the dishes afterward. But Mack disappeared. We put away the utensils and dishes ourselves. We figured he just needed a break and went downtown for the night. We were secretly hoping he’d gone away.

Everyone went to bed, trying to make jokes about the creepy place and its creepy keeper. We dubbed him “Maniac Mack,” and it helped us laugh about the experience. That is, until someone said, “Think we’ll all be here in the morning? I mean … he seems unstable. We can’t even call anybody and the closest building is miles away.”

That’s when I popped a sleeping pill. I knew it was the only way I’d get to sleep before dawn.

In the middle of the night I woke suddenly. My darn bladder. “I do not have to go!” I told myself. I thought of Mack outside by the toilets, waiting for his prey. “I can hold it!“ I tried to think about deserts, dry bread, and all things waterless. My bladder only hurt more.

I gave in and sat up, listening carefully in the pitch black. No sounds of Mack, just snores. I considered waking my bunkmate to walk out to the bathroom with me, but that was too unkind. If I had to be murdered, at least I would be a nice person beforehand.

Slowly, I felt my way along the cold hallway. Finally, I felt the outside door. My heart pounded. My bladder felt near bursting. I creaked open the door. It was pitch black. You could hardly distinguish the outside from the inside.

I heard a shrill whistle and startled. Just a bird. Silence again. I ran to the toilet and was back in a flash. I’d made it. I hurried back to bed and put the dirty covers over my head.

In the morning, we woke up. All of us. No axes, no blood, no bodies… and no Mack. Not a trace. We hadn’t seen or heard him since dinner last night.

We found some cereal, washed and put away our dishes and left enough money to cover the bill. And nearly ran down the two-mile mudslide back to the main road.

It had worked. For 18 hours, I had completely forgotten about turning 30.

The Lake District is located in Northwestern England. It is a dramatic region of mountain ranges like the Cumbrian Mountains and about 15 lakes that all belong to England’s largest National Park comprising about 80,000 acres (or 32,375 hectares). England’s highest peaks, Scafell Pike (3,210 feet/978 m) is located here, as are beautiful waterfalls and ruins of old churches and castles.